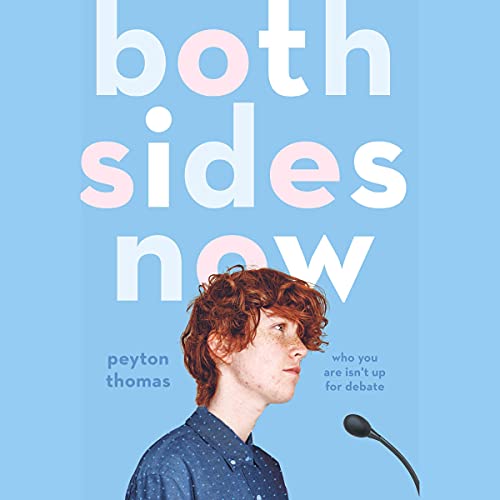 A witty and warmhearted novel about a trans teen finding his place in the world perfect for fans of Red, White and Royal Blue.

There’s only one thing standing between Finch Kelly and a full-blown case of high school senioritis: the National Speech & Debate Tournament. Taking home the gold would not only be the pinnacle of Finch’s debating career, but the perfect way to launch himself into his next chapter: college in Washington, DC, and a history-making career as the first trans congressman. What could possibly go wrong?

And that dream of college in DC? Finch hasn’t exactly been accepted anywhere yet, let alone received the full-ride scholarship he'll need to make this dream a reality.

Worst of all, though, is this year's topic for Nationals: transgender rights. If he wants to cinch the gold, and get into college, Finch might have to argue against his own humanity.

People say there are two sides to every argument. But, as Finch is about to discover, some things - like who you are and who you love - are not up for debate.

"Debut author Thomas’s conversational writing style is highly engaging and should draw readers in with a compelling story of self-realization and a bit of youthful romance."  (The Horn Book)

"This coming-of-age romance poignantly depicts self-discovery and finding your place in the world." (BuzzFeed)

The narrator does not make up for the racist book

Scott Turner Schofield's talents for narration are wasted on this novel. There was not a doubt in my mind that this book was written by someone with a white savior complex to end all white savior complexes. Maybe skip this thinly veiled South Park fanfiction, save your credits on this one. Yeah, you heard me right, this is aged-up South Park somehow. In case you were wondering. the "Cartman" character is Iranian now and since being anti-semitic towards Kyle (yknow, his whole thing in the show) is a big no-no he is... racist towards the Irish, which the protagonist (the "Kyle" character) now is instead of Jewish. Yeah, the author has fantasies of getting reverse-racist'ed at and getting to smack talk them down. Extremely nlnormal behavior /s.

The debate team plot very much smacks of this South Park centrism, with the topic for debate being a literal, unnuanced question about the trans bathroom bill, a case of human rights, something that literally would never appear in an actual debate team like this. The author wants to have his "mic drop and everybody clapped" moment when the setup is nothing but strawmen at a hayride. But by the end the lesson he learns that "both sides have a point, and we should ALL be able to have a say, even if they're wrong or bigoted" which.... no. Just no.

Somehow this book manages to click on some weird yaoi-roles-type transphobia, plain racist casting, and smug liberalism all at the same time. As far as trans coming of age stories go, you could go find 100% better material at your local community college, in real life.

A fabulous story, but more than that, it's wonderfully written- real and sweet and so, so witty.