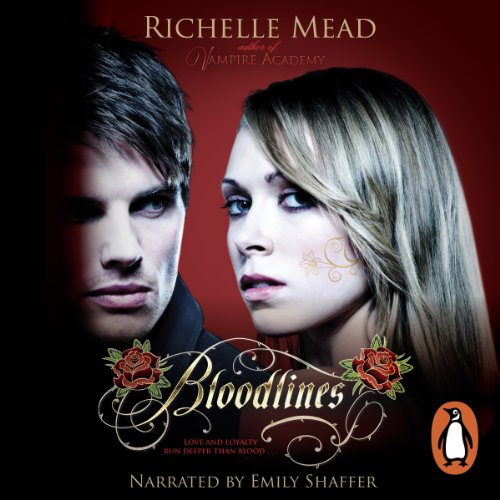 The unabridged, downloadable audiobook edition of Bloodlines by Richelle Mead. Read by the actress Emily Shaffer.

Sydney belongs to a secret group who dabble in magic and serve to bridge the world of humans and vampires.

But when Sydney is torn from her bed in the middle of the night, she fears she's still being punished for her complicated alliance with vampire Rose Hathaway.

What unfolds is far worse. The sister of Moroi queen Lissa Dragomir is in mortal danger, and goes into hiding. Now, Sydney must act as her protector. The last thing Sydney wants is to be accused of sympathizing with vampires. And now she has to live with one...

After the drama with Rose Hathaway, Sydney knows she’s skating on thin ice. Her fellow Alchemists have accused her of being a ‘vampire lover’ and she’s living under the very real threat of being sent away to a ‘re-education centre’. Worse yet, her actions may cause her sister to be dragged into the unsafe work of alchemy.

So when Sydney is apprised of a new assignment, she fights tooth and nail to be the one sent in place of her young and inexperienced sister, even though it means she’ll have to live with one of the ‘unnatural monsters’ she’s trying to protect the human world from. Secretly, Sydney knows that the gap between the Moroi and humans is smaller than she’s been led to believe. Living with Jill, the royal Moroi she’s been assigned to hide won’t be as bad as she thinks. It might even be fun, going to school and making friends. And nothing really happens in Palm Springs anyway…

After the Vampire Academy series, I think I expected Sydney to be similar in character to Rose, but I was pleasantly surprised. Don’t get me wrong, Rose is one of my favorite young adult characters, but a new series needs to have something fresh and exciting. Sydney is all that. She’s not your expected heroine. She doesn't fight, she wears suits and she’s altogether quite lady-like. Some would say, she’s a ‘good-girl’, perhaps even a ‘walk-over’…Yet there is a hidden strength in her blood. Sydney is the girl who can get her own back without breaking a nail or lowering herself to her opponents level. She’s all business on the outside. On the opposite end of the scale is Adrian: bad boy and party animal. United by their concern for their young charge, the two opposites team up, to make a surprisingly great team. The character development on the part of both characters is definite and heart-warming. It’s probably my highlight in this novel.

I enjoyed this story, and would like to find out what happens next, but I have to admit that it didn't enthrall me the way the Vampire Academy series did. Perhaps it was the lack of chemistry (excuse the pun!), the slower pace or the cliched feel of some of the interactions. Still a great read!

I wasn't a huge fan in the beginning of the narrator. She seems a little too forced, but she grew on me towards the end!