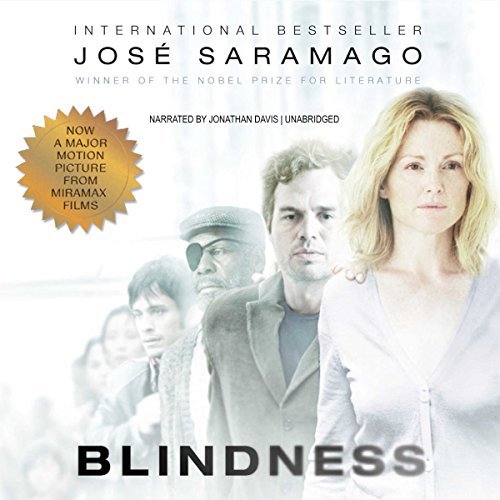 A city is hit by a sudden and strange epidemic of "white blindness", which spares no one. Authorities confine the blind to an empty mental hospital, but there social conventions quickly crumble and the struggle for survival brings out the worst in people.

There is one eyewitness to this nightmare who guides seven strangers -among them a boy with no mother, a girl with dark glasses, a dog of tears - out of their prison and through the barren streets, and the procession becomes as uncanny as the surroundings are harrowing.

A magnificent parable of loss and disorientation and a vivid evocation of the horrors of the 20th century, by Nobel Prize-winning author Jose Saramago, Blindness has swept the masses with its powerful portrayal of man's worst appetites and weaknesses - and man's ultimately exhilarating spirit.

Sexual violence is not entertainment.

The author creates, and dwells on, some horrendous scenes of gratuitous sexual violence which are not in any way necessary to the story. I really don't recommend this book.

This is a very different kind of doomsday fiction. The writing and reading of "Blindness" are vivid enough that I'm still a bit haunted by it several weeks after finishing.

The storytelling is very like Gabriel Garcia Marquez; disparate events are woven into a well told tale. While a Latino ken for life-metaphors is apparent, "Blindness" could be any time or place.

I heartily recommend it, but be prepared to "see" things differently.

Ridiculously boring, except if you enjoy lists

SPOILERS**** Great premise. Terrible execution. Suspension of belief is essential to most good stories but when pushed too far it ruins the experience. No names used, not one character shows even the slightest adjustment to their affliction throughout the story, a single immune person amongst the entire population, literally no thought toward long term survival by the characters, behavior bordering on stupidity by the characters (such as not looking for batteries and a flashlight inside of a store). AND THE LISTS!!! MY GOD THE LISTS!! Half of the book is spent listing off seemingly irrelevant possibilities if the characters could only see. Great idea with the zest of an accountant in its execution. Only finished out of sheer stubbornness. Oh and the end is as predictable as the book is boring.

Saramago is a Nobel laureate, so I think we have to credit him with having insight worthy of our attention. Blindness is a powerful parable, but I think it has to be read as a surrealistic allegory rather than any attempt to portray the situation as it might actually occur in the real world. I agree with the reviewer that pointed out that this parable is much more accessible in the oral than in the visual format. The endless run-on sentences and lack of proper names makes the reading hard to follow, but as a narrative, it isnt so bad. Maybe this was the intention of Saramago. In the story he has the blind listening to readings from the only sighted individual as their only source of entertainment, and he may have intended this as a more powerful verbal parable that a written one. I am an ophthalmologist myself, I found this story to be an intriguing thought experiment, but I was waylaid by the fact that the author made no attempt, or possibly consciously avoided the attempt, to make the story scientifically plausible. There are so many incongruous elements in time and space, its like a Dali painting. For instance he talks about the doctors wife being distraught about not winding her watch. The last time I had to wind my watch was probably in the 1960s, and then he talks later about computers functioning the water system. The ophthalmologist talks about ordering an encephalogram , which we havent used since the 1970s, instead of a CT scan or MRI. He also talks about how the blind stop gesticulation when they talk. But people with acquired blindness have their gesticulations programmed into their extrapyramidal system and never loose that habit. Did he intentionally ignore present day science so as to make the story more surrealistic, or is he a lazy Nobel laureate researcher?
I thought it was a provocative read, intriguing and thought provoking. But dont expect Crichton. Think Lord of the Flies by Gabriel Garcia Marquez.

This is just bad writing. The story gets bogged down in minutiae that add nothing beneficial to the story. The characters act in ways that do not conform to logic. For example, after one of their group violently attacks another man and shortly thereafter proceeds to sexually assault one of the women, the group expresses an inordinate amount of concern over the wound he received from his female victim during the attack which has become infected. This woman goes on to appologize TO HIM for the injury as though she had simply overreacted to a harmless compliment! Follow that with some more inane descriptions, and i finally called it quits in chapter five.

Slow moving and softly spoken this is story that takes a longtime in the telling. I am not sure why I listened to the whole thing but I did. I think it has more to do with my habit of finishing what I’ve started than any suspense or intrigue in the story.

If you want to spend a lot of time in the mind of the only sighted person in a end of life as we know it this would be a book for you.

I was fooled into thinking this would be good

....because it was made into a movie. It was not. At times it was actually irritating to listen to .

It’s a good thing it was included for free and not a waste of credit.

Narration was great, though.

The famous Portuguese author Jose Saramago paints a cold and halting portrait of what it would be like were Blindness suddenly contagious.

To prevent a pandemic, the government quarantines the first stricken, including the Doctor (an optometrist) and the Doctor's wife, the latter of whom is obviously immune to the disease. As the story progresses, the gov't puts more and more blind people into the abandoned building, with little food and zero supervision, forcing them all to fend for themselves. To add to the icy subtext, Saramago gives all the characters only descriptors, like the Doc, the Doctor's Wife, the Girl with Dark Glasses, the Cab Driver, etc.

This is a tale of both the goodness and baseness of humans in a world of darkness and squalor. Evil and the treachery of men initially wins, but goodness eventually prevails, so that this novel is ultimately hopeful.

The potential reader should be forewarned that this book contains graphic scenes of the rapes of several women.

As usual, the narrator Jonathan Davis is excellent.

It's an interesting concept, but I wonder if Jose Saramago has actually known any blind people. If you suddenly turn blind wouldn't the first place to go be a hospital or doctor. Names are important. How else do you refer to someone in the third person? It was cumbersome to always have to refer to people in such terms as "the first one to go blind" or "the girl with the dark glasses." The eye doctor's wife, the unsung heroine, seemed a bit devoid of the normal emotions of a spouse and a human being. She was also frustratingly slow to act in a manner that would have brought relief to all the inhabitants of the institution - especially the women.

Jonathan Davis was excellent with the delivery of the story