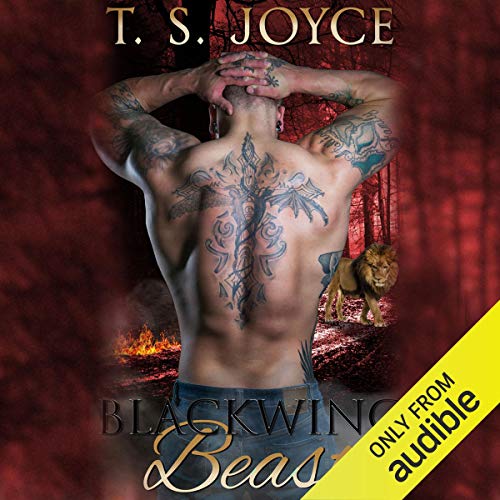 Beast wants only a few things out of life: to be left alone, to join the Blackwings so he can be left alone, and for everyone to stop expecting anything from him and leave him alone. He was king of the lion shifters once, but his fall from power came at a huge personal cost. Rumors run rampant over what really happened to his pride, but the truth has hardened Beast's heart to stone. He's kept the Blackwings at arm's length, but when a human starts stalking his crew, his inner monster-kitty gets curious.

Kiera is gorgeous and mysterious, but she also has strange eyes and a scent that is calling to his animal. No human has ever interested him quite like her. But when he finds out who, and what, she really is, he'll have to risk his heart again. And for a monster like him, caring for a woman could put everyone around him in danger.

Kiera Pierce has been through hell and back, but she's still standing and fighting. She's in big trouble, and is being hunted by one brutal pride of lion shifters. When she seeks sanctuary in Kane's Mountains, she doesn't expect a scar-faced behemoth to be her hero. Oh, she's heard of Beast, and knows the rumors about him, and if they're true, he's a ruthless killer in a sexy package.

I have enjoyed every one of thus collection that Audible has added to the list, and there are that are not on Audible's network. I feel I have missed a lot of the series. There are no stories on the BloodRunners, Harpers' story and more. I would really like to read the complete collection. I have thoroughly enjoyed these stories.

I just can't get enough of TS's books! The story is so well written that you lose yourself in it. This is the third book in Kane's mountains and features Beast and Kiera. While each new book is always my favorite, Air Ryder has held a special place in my heart. Beast just pushed him out of the way and has successfully taken over the #1 spot as best book boyfriend. I'm sure Air Ryder will understand that being second isn't too bad since he's still near the top.

I liked ummmm 4.20% of this book
I listenEd to another book by this people who wrote this & it was good.
This one not so much
Have a happy day

Still one of my favorites

I love this story and couldn’t resist getting the audio version. The performance was good but I took one star away because I wish the male voice was better. But the performer did an overall really good job.

This series was the most hilarious out of all the crew books. I laughed so hard that I cried through each book. The narrator was well suited for these books.

Perfect weekend indulgence. Great characters. Narrator does a nice job. Please do more of your stories on audible.

Great series. I wish there were more books in it. The Narration is perfect and the story very entertaining.

Loved this one so much

It’s kinda like Beauty & the Beast, lion shifter style. We learned the truth behind the name Beast, and Dark Kane found a friend he’d been hunting for that went thru the Apex experiments with him. Overall wonderful storyline and narration.

Loved the Kane series. It was sweet and to the point. I've grown tired of listening to 11 hour books, wth! Anywho, sometimes you want everything to be perfect but I've noticed the author is realistic, lol.

In book 1, Winter ended up with those horrible bear marks on her arm from being claimed by Logan. In book 2, after Emma was changed, well don't want to spoil anything just in case someone is reading the series backwards, but her hearing wasn't perfect. And last in book 3, kinda wish in the epilogue, Beast would have had more children. I usually will listen to a book until the end so really glad these stories started out interesting and didn't take up my whole day.

I loved listening to this series. I listened to books 2 and 3 back to back and never got bored. This narrator does a good job of keeping the reader involved in the story.
This was the final book in the Kane's Mountain series. Beast is a strong protector who gives everything to protect those he cares about.

my abselute fav. Quote of this book it sum's up so much if you know T.S Joyce books you'll understand. As to thisbook i loved it front to back an amzingly emotional rollercoster worth every Minute spent listening. T.S realy knows how to make you feel at home in the Worlds she creates and all her characters become dear Friends. as Always i'm sad ist the last in the series.