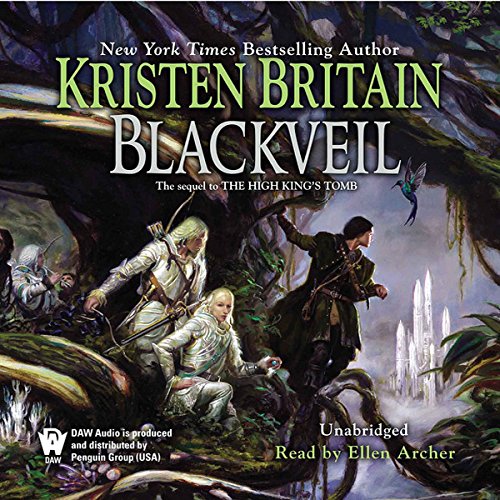 Once a simple student, Karigan G'ladheon finds herself in a world of deadly danger and complex magic, compelled by forces she cannot understand when she becomes a legendary Green Rider - one of the magical messengers of the king. Forced by magic to accept a dangerous fate she would never have chosen, headstrong Karigan has become completely devoted to the king and her fellow Riders.

But now, an insurrection led by dark magicians threatens to break the boundaries of ancient, evil Blackveil Forest-releasing powerful dark magics that have been shut away for a millennium.

love audible for bringing this audio to us

If you fancy a well written fantasy with all the right ingredients, with tales that weave in and out the main one without being all mess up, with the universal battle between good and evil not being too predictable, with the right dose of romance, an -of course- unobtainable one at that and again making you doubt the final outcome.Well I think you will enjoy this series, as for this book (Blackveil) in particular the positive point is mainly that keeps your interest in the series and you expect the next one, which in my opinion at this point in the series is no small task.
The negative points are the time elapsed between books and the recounts needed to update the reader of previous events. But miss Kristen Britain does not overdo the latter
so, all in all i'll say: enjoyable, worth the money and the time!

The story has a decent plot but shows little advancement of character throughout.

Has Blackveil turned you off from other books in this genre?

What does Ellen Archer bring to the story that you wouldn???t experience if you just read the book?

Do you think Blackveil needs a follow-up book? Why or why not?

Yes!. The series is not finished.

Then hero of this series is just as immature and willful and stubborn at the end of the 4th book as she was in the first book. When the hero of a series doesn???t grow or change his or her habit pattern through a series of books I think the author has done the character a disservice. Why is it that when the hero is challenged by the villain that he or she has about five minutes to argue about their fate and natter on and on for five pages instead of defending herself. She never believes her eyes and suffers time and time again. She is constantly willing to hurt those she cares about but agonizes over the smallest slight done to her.

Good but weird at one point

If you have read my other reviews, you know I have loved this series so far. But I have to say the weird ritual rape scene kind of threw me for a loop. There has been nothing like that so far in the series. It was handled as gracefully as possible but...really?

Other than that, I love the characters and the situations they get into. So this book is a continuation of the greatness of the previous books minus that one weird blemish.

Ellen Archer does her usual excellent job portraying these characters.

I would still recommend the series as Karigan gets thrust into the most amazing circumstances as a member of the Green Riders. I have very much enjoyed reading them so far.

The entire series has been very well written and read . . . but with the ending of Book 4, Ms. Britain had me hanging, could not belive how she ended it, especially when I had no idea that there was a Book 5 in the works. Audible gave no indication that Book 4 was not the end of the series. For all to know - Ms, Britain has sent Book 5 to publisher, I await with great anticipation.

Would you listen to Blackveil again? Why?

I have already listened to it twice... But then I have read it four times so what's a few more times?

What was one of the most memorable moments of Blackveil?

her talks with her father.

the ending. I can't wait for the next book.

I have all of these books, and the audiobooks. the stories are just wonderful.

Great Trilogy but beware it will leave you hanging

Would you listen to Blackveil again? Why?

What does Ellen Archer bring to the story that you wouldn’t experience if you just read the book?

Her ability to adapt to different characters in the book

I have really enjoyed the whole series. I like the way the main characters have begun to really develop. I really like the King, the Capt of the Green Riders and the heroine. I hope that book 5 comes out soon and is done as an audio with the book release.

The multiple threads are easy to follow, although the sea journey seems meaningless, and Grandma seems like a contrived tension. The 3M (major metaphysical melee) component of the story is the least engaging element in the series so far. And broken hearts are just part of a normal life - stop pining and just get over it. Still, a good tale.

I have read this book and fallen in love with the characters and now that i have the audio for it make me love them even more.

I have loved Karigan's story from the moment I stared reading it. I've probable read the books about 4 times now and I still love every moment. I've downloaded the audio version to listen to while I'm at work. I just wish I could find more like this series. Kristen Britain is an amazing writer. You can really feel her stories coming to life as you read. At first, I wasn't fond of Ellen Archer as the narrator, but I find I'm usually like that when I listen to a different narrator for the first time. In actuality, Ellen does a really wonderful job at narrating and you can see the story happening around you. It's very immersive. I definitely recommend this to anyone who likes fantastical stories!

This is getting more and more ridiculous...

The only thing the heroine cannot do is sing- you can see every plot "twist" from a mile away. Good dumb fantasy fun