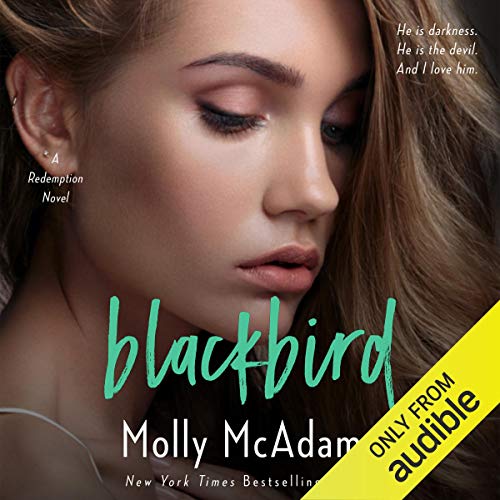 On the outside, Lucas Holt is what nightmares are made of. A man cloaked in darkness, with sin-filled eyes and an enticing grin. A devil so devastatingly beautiful and cruel that his very presence instills fear. But beneath his terrifying, ever-calm exterior is an affectionate man haunted by a past that refuses to stay buried. And Lucas looks at me as though he's finally found the only person who can make it all go away.

This is a new to me author but if all her work is this good I'll be happy to listen to many more of her audiobooks in the future. This book was a little dark but not as dark as you think while listening (sorry you probably have to read it to understand what I mean by that). Briar is a strong women who is accidentally brought into a world of the dark dangerous and she handles is as well as she can. Most female characters in captive books are really believable in the way they handle their situation but I thought the author did a great job at making Briar realistic. Lucas thought he knew what he was getting into with Briar but man he was wrong. His character was all over the place on my likable scale. My feelings about him changed about five times but in the end I understand why and that is great writing to me! The plot was thrilling, sexy and the twists made a good story great.

The narration is why I picked up this book to begin with. I am a huge fan of Erin Mallon and she was fantastic in this book. She is really amazing with stories that have high excitement and she has a perfect tummy tingling male voice too. Jason Clarke is also a favorite of mine, I love that when he narrates I completely forget who he is because all I hear is the character in the book not a narrator reading a story to me. This narration duo would make me try many many new authors because I know they can make even an ok book great. Thankfully this book was just as good as the narration!

Man o man I've got one serious book hangover after finishing this intense story.. the plot line was riveting, the drama was nail biting, the suspense was intense, the multi-layered hero was deeply flawed yet definitely redeemable and the beautiful love story that developed brought out so many conflicting feels. I cautiously listened as, at the start, Ms McAdams cleaverly flipped between the dark scenes in the present and the light scenes of before the heroine's life-altering abduction.. and thankfully (for me) the story never got darkly disturbing or depraved.

Blair Rose came from money and was marrying into it too.. she was happy, excited, in love and very eager for her upcoming wedding in two weeks.. but the night she agreed to swap shifts would change her life completely. Kidnapped, auctioned and introduced to a secretive world of ownership, Blair sang.. she sang in helpless terror not knowing that it was her singing that'd first caught the interests of her handsome new owner who she later nicknamed the Devil. He would eventually become HER Devil but before then there was going to be a lot of challenges, tears, heartache, life-threatening situations, passion, pleasures, jaw-dropping twists and revelations.

Lucas Holt (aka the Devil) is shrouded by secrets.. the lifestyle his mentor's been grooming him for is a secret, the scars beneath his tattoos tell of a secret bloody past, secrets and more secrets drive him but the moment he hears his Blackbird he knows he has to have her.. his first acquisition. They only took the abused, the lonely, the ones nobody would miss or look for but this time they got it wrong. For Lucas' plans she was meant to be just one of many.. but she ended up being THE one.. the one that would change him, challenge him, give him absolution and completely alter his future.

This isn't like any other kidnapping/captive themed romances that I've listened to before.. it's so well layered with drama, angst, suspense, chills, twists and tension filled scenes.. as well as interesting characters who quickly get caught up in a powerful attraction.. an attraction which they both try to fight. There's building climatic dangers with a secondary character and intrigue too because you just don't know what this talented Author is going to hit you with next. Yes it starts off with kidnapping/human trafficking which is a dark subject matter.. however, (unrealistically I know) it morphs into so much more when the very damaged alpha hero opens up, becomes vulnerable, loves deeply and lets his secrets out. And, because of his very human side, I never saw a monster - nor did I think the heroine was suffering from Stockholm syndrome. There's also character development, touching scenes, tender words of love and selfless sacrifices. Faultless dual POV narration on top of an amazing storyline made this a perfect listen.. especially Jason Clarke's dreamy voice.

Worth a credit? A million x yes.

Soooo, I'm not gonna lie, I only borrowed this title because it had Jason Clarke's name attached to it. I had just finished listening to Taboo Unchained by CM Stunich and fell swiftly and hopelessly in love with both voice and character. It is eery how similar the Lucas of Blackbird is to the Lucas of Taboo Unchained, devils and darkness and inner demons and all. By all accounts I should have loved it. And maybe had I read it, I would have. Clarke's performance, which was dark and sultry and oh-so-delicious was ruined for me by Erin Mallon's portrayal of Briar. Her entire dialogue was over the top breathy and whispery and whiny. Totally at odds with what I could imagine a woman in her position would likely sound like. Granted, the overall plot was highly implausible, moved way too quickly and was pure fantasy (in a down and dirty type of way, I will add), so its hard to say how one would really sound. But if I wouldn't have missed half the story by skipping her chapters, I definitely would have. I wanted to stab a pencil in my eardrums every time there was a switch. And just sayin' but I HATE when female narrators deepen their voice for male parts. If you don't have the voice for it, don't force it. It just sounds stupid most of the time. And don't get me wrong, I'm all for multiple narrators, but this was my first experience with Erin Mallon and I'd love never to hear her again. Which saddens me, because it seems that she is paired with Jason Clarke on numerous titles. Sorry Ms. Mallon, you seem like a great person irl, and I've seen the die-hard fans, but I personally can't take the tearless crying with every word.

Briar is abducted by her devil. Her devil that she grows to love and hate and then love more than hate. Could be Stockholm or it could be that they were always fated to be. But soon things are turned upside down again and loyalties are tested yet again.

What drew me to this book was the dark and gritty but what kept me listening without so much as a break was the unique storyline. Auction and abduction has been told before but Molly McAdams takes that and makes it her own in a way that I just couldn’t shut down.

Jason Clarke had that confident and sexy voice you would expect from this character and Erin Mallon was the hesitant and unwilling sounding voice the character demanded of her. All in all an excellent listen.

I am confused by the people who found this enticing or romantic. It was a combination of poorly written and borderline disturbing but mostly stupid.


I have read plenty of dark sexy books and liked many of them but there was no reason this woman would have fallen in love with Lucas. If you want to read great dark romance try JA Huss.

Would you consider the audio edition of Blackbird to be better than the print version?

I have only listened to the audio....love it

They were both great...really well written

What does Jason Clarke and Erin Mallon bring to the story that you wouldn’t experience if you just read the book?

The narration was great. Erin is good

Narrator killed it for me

Erin Mallon...how can you be in hysterics the entire time. I liked the book but she ruined it for me. All the breathy panic drove me crazy.

This is my first book by Molly McAdams. Great story with lots of plot twists! I like that it was fast paced. I couldnt stop listening.

Jason Clarke and Erin Mallon are fantastic in this book. They are great narrators!

Loved it! I'll miss these characters. This book is now on the top of my favorites list.

Holy cow! What a ride!

Edgy, gripping, exciting and emotional. loved every second! What a powerful journey! Read it today!