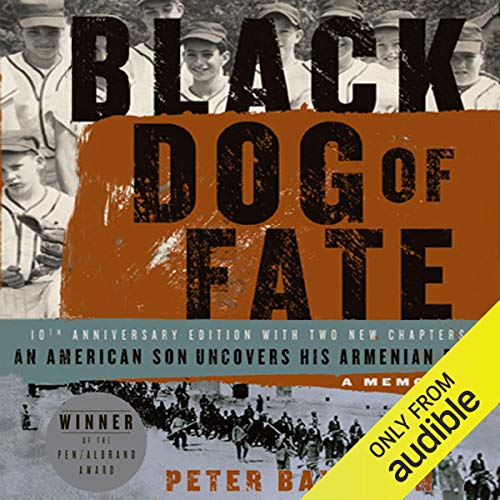 The first-born son of his generation, Peter Balakian grew up in a close, extended family, sheltered by 1950s and '60s New Jersey suburbia. He was immersed in an all-American boyhood defined by rock 'n' roll, adolescent pranks, and a passion for the New York Yankees that he shared with his beloved grandmother. But beneath this sunny world lay the dark specter of the trauma his family and ancestors had experienced: the Turkish government's extermination of more than a million Armenians in 1915, including many of Balakian's relatives, in the century's first genocide.

In elegant, moving prose, Black Dog of Fate charts Balakian's growth and personal awakening to the facts of his family's history and the horrifying aftermath of the Turkish government's continued campaign to cover up one of the worst crimes ever committed against humanity. In unearthing the secrets of a family's past and how they affect its present, Black Dog of Fate gives fresh meaning to the story of what it means to be an American.

"A rare work of seasoned introspection, haunting beauty, and high moral seriousness." ( Kirkus Reviews)
"Balakian writes with power and poignancy, confronting his past with justified outrage and transforming that outrage into art." ( Library Journal)

If you could sum up Black Dog of Fate in three words, what would they be?

What would have made Black Dog of Fate better?

Has Black Dog of Fate turned you off from other books in this genre?

The beginning is great. Memories of his childhood and with his grandmother are very fun to hear

This could have been a great book if only the author would have been less biased. The story is very sensitive in nature and requires a great deal of talent, which I think the author lacks. The beginning is lots of fun with his childhood memories, but once part one is over, his style changes dramatically. The story becomes very offensive with full of excoriation and verbal condemnation of the target nation. He often fails to provide proper citation for quotations. I would not suggest this book to those who do not have prior knowledge of the Armenian genocide.

i will read this one...difficult to listen to

I have been waiting to listen to this book for a long time. Finally, it was the right time and I downloaded it. And, the author is not the person to read this. He makes it too much of a poem and the cadence is difficult.

Interesting except for the raw immaturity

Author seems never to have grown up. Stopped listening after the second reference to his teenage sex life/fantasies.

What did you love best about Black Dog of Fate?

I could not get past the reader's tedious monotone...if I had not needed to finish this book for a book group, I never would have made it to the end. I wanted to put it down after an hour.

Story everyone should read

It's been years that I had purchased the hard copy of Balakian 's book but unfortunately I've never read it. The audio version helped me to finish it in one week. Very convenient, even though sometimes I had to redo my make up. Thanks Balakian for writing this memoir to keep your grandmother' s and your people story alive.

couldn't put it down

this is last time I read an author-narrated book. the reading was infuriatingly bad. but in spite of his horrible & distracting phrasing, the story was so compelling that I read it straight thru. wonderfully written, lovely combination of personal family and graphic historical account of the Armenian experience.

I found Peter Balakian’s Black Dog of Fate to be one of the best memoirs I’ve read/listened to. As a third generation descendant of Armenian genocide survivors, this was the first time that someone had to put words to my own experience growing up in the diaspora. His words touched me so deeply, I could hardly get through the last few chapters without being moved to tears. While it might be difficult for those who did not grow up American to relate to Balakian’s depictions of American culture, I highly recommend this memoir to anyone interested in learning about the Armenian genocide. Balakian does an excellent job weaving historical facts into personal narrative; I appreciate the extensive research that went into writing this book. A must read for those who are interested in learning about the first genocide of the 20th century & Turkey’s systematic denial of committing the most atrocious crime against humanity of modern history. Trigger warning: some of his depictions retold by eye witnesses are quite explicit.

Peter Balakian was able to recreate for the reader his own experience of discovery - of his family’s past and the terrifying and wonderful past of the Armenian people. The book asks: how could this genocide have happened—in full view of the world? How, in the face of the thousands of eyewitness accounts, is the silence and denial of governments entangled in geopolitical interests allowed to persist? These questions hang in the air for all of us, unanswered, like the ghosts of the unacknowledged and unburied.

Well documented story with a deep understanding and passion of the Armenian genocide! Once I started listening to it, I could not put it down. I am telling my children and grandchildren to read it too.

A must read book.