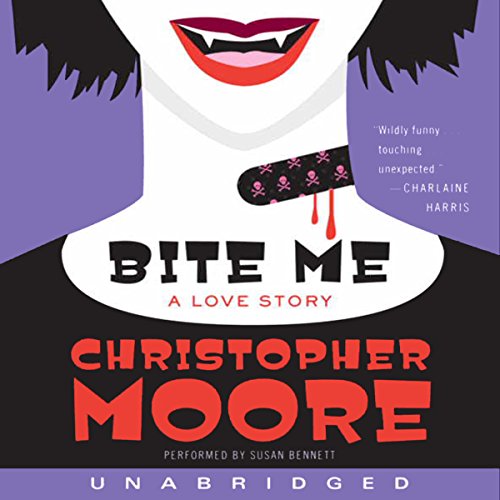 "The city of San Francisco is being stalked by a huge, shaved vampyre cat named Chet, and only I, Abby Normal, emergency backup mistress of the Greater Bay Area night, and my manga-haired love monkey, Foo Dog, stand between the ravenous monster and a bloody massacre of the general public. Whoa. And this is a love story? Yup.

"‘Cept there’s no whining. See, while some lovers were born to run, Jody and Tommy were born to bite. Well, reborn, that is, now that they're vampires. Good thing theirs is an undying love, since their Goth Girl Friday, Abby Normal, imprisoned them in a bronze statue. Abby wants to be a blood sucking fiend, too, but right now she’s really busy with other stuff, like breaking in a pair of red vinyl thigh-high Skankenstein® platform boots and wrangling her Ph.D.-candidate boyfriend, Steve (the love monkey). And then there’s that vampire cat Chet, who’s getting bigger and smarter—and thirstier—by the minute. Abby thought she and Steve could handle the kitty cat on their own, mais non."

Before you can say “OMG! WTF?” Tommy and Jody are sprung from captivity, and join forces with Abby, Steve, the frozen-turkey-bowling Safeway crew, the Emperor of San Francisco and his trusty dogs Lazarus and Bummer, Abby’s gay Goth friend Jared, and SF’s finest Cavuto and Rivera to hunt big cat and save the city. And that’s when the fun really begins.

Very rarely do I believe anything in life is worthy a perfect score, however Bite Me has earned this exception. Christopher Moore is one of the greatest authors/story-tellers of all time and Bite Me is the epitome of his talent. Very rarely do you come across an author that possesses the talent to evoke our raw emotions, and even rarer in a fictional environment. And not to short change Susan Bennett as her incredible narrative talent and multiple voices most certainly helped bring this story to life.

I am a big proponent of not spoiling a story and therefore will limit my comments. Rest assured however, Bite Me and the two other books in this series (Blood Sucking Fiends and You Suck) are truly worthy of your time.

Bite Me does a superb job of tying-up the loose strings left after You Suck. I am in awe of Christopher Moore&#8217;s literary ability used to develop the characters over the course of these three novels. I can&#8217;t help but feel the same love, compassion and concern one might have for a non fictional character. I now truly understand the meaning (and emotions) of a bitter-sweet ending. Although I believe Bite Me will be the last chapter in this current saga, I do hope the author guy chooses to continue bringing back our favorite characters. Certainly the inspectors will be back and who can&#8217;t imagine the fun and troubles of Abby and Lilly. As I don&#8217;t want to spoil anything, I will only say that there are two other characters that I hope might find their way back.

Bottom line; read, re-read and then read again the three Christopher Moore vampire books (or should I say listen to).

k-so this book is frickin hilarious!

I literaly wet myself I was laughing so hard.

Mr Moore has outdone himself, and I dont think any other narrater than Susan Bennett could have done this reading justice.

Listen to this one on the weekend. If your at work or in the car your going to get some strange looks when you burst out laughing.

You have to read this book. Read it. Listen to it. Sleep with it under your pillow. It's so unblevablly funny I love it!

Christopher Moore yet again writes an incredibly funny sequel to "You Suck: A Love Story" which is a sequel to "Bloodsucking Fiends". This story contains vapirous cats, rats, an emperor and other surprises that keep the story funny and interesting.

Susan Bennett does a fantastic job narrating the characters in this book. From the cool Jody to the chipper (yet in perpetual despair) teen goth Abby Normal, to the lispy Jarrett, Susan's delivery adds to the funny.

I highly recommended "Bite Me" to those who can handle a funny (yet at times crude) story that adds new dimensions to the age old vampire story. Also, any potential downloader must not be sensitive to a story containing curse words (the book doesn't overdo cursing, but it is in there and many are very sensitive to it)

He Rocked My Stripy Socks!

I loved Blood Sucking Fiends and You Suck. Reading them was funny, listening to the brilliant narrative efforts of Susan Bennett, is downright side splitting. As I am one who can listen while she works, I should have thought better about playing Bite Me while I attempted to do so. I'm sure my co-workers thought I was having seizures while I tried to control my laughter. If there is anything funnier or more entertaining, I have yet to hear it. Without giving anything away, I will say that Mr. Moore is totally brilliant and that his sense of humor lends itself artfully to his work. Hearing is believing and I believe that to not give Bite Me a listen to would truly 'Suck and Bite'

I love this series! Abby Normal is the funniest most sarcastic and annoying character I have ever met. She makes the book for me.

Moore is hilarious and Bennett is the perfect narrator for his books. I'm always wanting Moore.

In the almost 20 years since I started "reading" with my ears I've listened to literally hundreds of books, and this is the 1st time I've been moved to write a review. Not only is this the best thing Moore's ever written (and I've heard or read and thoroughly enjoyed all of his books), it is probably the funniest thing I've ever listened to. The writing is crisp, inventive and hysterically clever, and the reader, Susan Bennett, is absolutely brilliant! While I thought all of her character voices were excellent, her rendition of Abbey Normal just about had me rolling on the floor time and again.

I really cannot say enough about how entertaining this audible book was for me. Don't miss it! If the combination of Mr. Moore's writing and Ms. Bennett's narration doesn't make you laugh out loud, you're deluding yourself about having a sense of humor.

I sincerely hope Christopher Moore isn't done with this cast of oddballs -- Abbey Normal is now one of my all time favorite literary characters and I would happily listen to any story that includes her distinctive and delightful point of view, especially if she's given voice by Ms. Bennett. Abbey rocks my stripey socks! So, enjoy, people. We could all use a good laugh!

I am generally done with the whole vampire thing - I had a serious Anne Rice obsession about 20 years ago and haven't been that impressed with the updated genre. I will gladly set my cynicism aside for Christopher Moore though - he can do little wrong in my eyes and I am totally biased when it comes to reviewing his work. This book is so silly and smart at the same time it entertains the entire way through. Susan Bennett does an amazing job at bringing all of the oddball characters to life - it took some getting used to because there are more male characters than females but she more than handled the challenge. Come prepared for some campy fun and B-movie sci-fi action - and whatever you do,don't let anyone shave your huge cat.

I love Christopher Moore and have read or listened to all of his books. I'm so glad that I got this one on audiobook! The narrator can make or break the story, and whoever chooses Christopher Moore's narrators does an outstanding job of choosing people who can capture the voice and tone of his writing. With Bite Me, his team has outdone themselves. This is, by far, the most enjoyable audiobook experience I have ever had. It's probably the first time that I actually can't imagine the written word being more enjoyable than the spoken word, although I'll still probably buy the book to complete my Christopher Moore collection.

Christopher Moore is hysterical, and every character is well developed and rings true, and Susan Bennett is brilliant. I agree with the reviewer who said that if you don't enjoy this, you have no sense of humor.

I only wish that the author wrote faster. I hate waiting for his next book to come out. I'm also going to look for other books narrated by Susan Bennett.