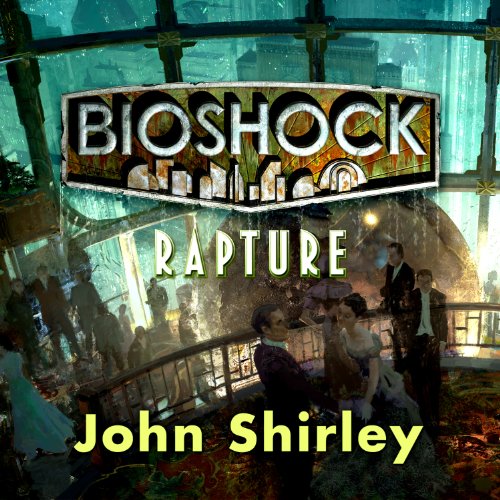 It was the end of World War II. FDR's New Deal had redefined American politics. Taxes were at an all-time high. The bombing of Hiroshima and Nagasaki had created a fear of total annihilation. The rise of secret government agencies and sanctions on business had many watching their backs. America's sense of freedom was diminishing... and many were desperate to take that freedom back.

Among them was a great dreamer, an immigrant who'd pulled himself from the depths of poverty to become one of the wealthiest and most admired men in the world. That man was Andrew Ryan, and he believed that great men and women deserved better. So he set out to create the impossible: a utopia free from government, from censorship, and from moral restrictions on science, where what you gave was what you got. He created Rapture - the shining city below the sea. But this utopia suffered a great tragedy. This is the story of how it all came to be... and how it all ended.

I already own the book but i wanted the audio book too, because it's such a nice detailed prequel.
The downside of this audio book is its bitrate. Only 32 kb/s...That's really low if your average bitrate is 128 or higher. It just sounds a bit tinny, like a can phone.

This needs to be a movie.

I bought this book on a lark. I have heard of the game, but never played it. I quickly however enjoyed the story. The whole time that I was listening to it, I was envisioning this as a movie. It is a bit twisted and gory at times, but I still liked it.

I liked the narrator a lot. I have not listened to him before, and I have about 160 books. The only issue I had with him is his accents. One of the main characters, Bill, was supposed to have a cockney accent. Bill however sounded more like a Vermonter than a Brit. He also could not do a Brooklyn accent very well either. But I loved his voice and cadence. He kept me interested.

Yes, for those who played the game it is essentially the prequel.

What was one of the most memorable moments of Bioshock: Rapture?

Unfortunately, the ending. I don't do spoilers.

No, it is vast, deep and sometimes cumbersome. The characters and happenings are so vast that there may be times you want to shut it off to try to absorb it.

I have waited for this book for years, since the first game came out. This is not a direct translation of the game. It is entirely the prequel. It describes the origins of Rapture and all of the major players.

It left me feeling empty. I can't see to play the game and I was hoping it was the direct game translation and would bring some of that excitement, it wasn't and really didn't. That is not to say it wasn't good. For those who played the game it will add depth and explanation. For those that won't play it, it is a foray into strange political intrigue.

The main character Andrew Ryan is obsessed with building a "utopian" world underwater to escape the dangers of living on the land post WWII. Once this is done, hIs failed leadership decisions turn the world into chaos and destruction worse than anything happening on land. A power struggle ensues and between Ryan and his two antagonists, Dr. Lamb and Fontaine, they provide an all-encompassing view of three types of societal living without regulation. Capitalism, Communism, and Anarchy are explored and it turns into an underwater hell that threatens to kill them all slowly.

In many ways this could be taken more like critical literature than just an entertaining novel about a video game story. Don't be fooled by the game or the title this subject matter is deep, no pun intended. If you are into political theory, sociology, psychology or just want to know how Bioshcok began, this is a very interesting read and you MUST read it to fully understand it.

So Much Potential gone to waste

I enjoyed the Bioshock video games and was really hoping to learn more about the lore behind it with this book, but instead I was disappointed. There was a lot of potential and it all fell flat. The climax of the book, the atrocities that occur fell flat, the blinding charisma of both Ryan and Atlas, even Sophia Lamb was dismal at best. The narrator was appalling and couldn't hold an accent to save his life. Absolutely awful. His British sounded Australian, his Irish sounded Indian. It was dreadful to sit through. Perseverance alone is what got me through this awful book and I'm upset I wasted an audible credit on it. I would never encourage anyone to read or listen to this book.

Narrator has no clue who these characters are!

Kafer narrates this books as if he's recording a piece for Nightline. Every word has a phony breathy affectation that is obviously beyond his natural range. Perhaps Mr. Kafer has been watching too much Twilight Zone episodes as he sounds like a pale imitation of Rod Serling. More importantly, he has taken the central character of Andrew Ryan and turned him into a boring and uninteresting dullard with the exuberance of a signpost instead of the stern and impactful 1930's newsreel voice that we have all come to know from the games. His accents are god awful as Bill McDonough sounds like the spawn of a beleaguered cockney Brit that mated with a hillbilly Irishman. Then to make matters worse, he takes the tortured character of Sander Cohen and turns him into a 21st century joy boy instead of the early 20th century dark eccentric that he was intended to be. His sexuality was never discussed and it should remain ambiguous, but Mr. Kafer's voice work has left no doubt that Sander is floating a solid foot off the ground, quite contrary to the character's intended presence.

Did this narrator consult any of the source material before recording this? There are literally hours of voice recordings available online for free that he could have used as reference for this project. It's this type of lazy work that gives me pause before buying audiobooks from new narrators. I would give the narration 0 stars if that were possible.

Story and book are fantastic!

I love Bioshock, so this was easy to hear. The person reading it was by no means bad, but the accents could be improved. Still absolutely worth it.

Like other reviewers, I'll have to agree the reading is the hardest part to get through. Accents are all over the place and I sometimes forgot who was talking within a scene. His cadence is repetitive and it's distracting but I eventually got used to it although it was still noticable.

The writing itself is somewhat repetitive in it's discriptions but otherwise it's good enough to paint the picture in your mind.

As a lover of the Bioshock game franchise I've always wanted to know more about the beginnings of Rapture and this story did that for me. It's the only reason if completed the audio audiobook.

Overall, an almost average experience that I initially struggled to finish.

The narrorator wasnt that great but the story was good, very memorable. the biggest issue which was more a pet peeve then anything, the narrorator was terrible at accents. I was able to get past it though.

A brief history of Rapture

A much appreciated detailed look into the rise and fall of Rapture, already one of the most detailed worlds in gaming, even in sci-fi as a whole. Richly crafted and populated by interesting characters, giving insight into how Rapture existed before it was overrun by crazed mutations.
Unfortunately, I can't say I enjoyed the narration. Jeffrey Kafer's voice isn't unpleasant, but his line delivery is often odd, and his accents are stereotypical at best and godawful at worst. In particular was his portrayal of Bill McDonagh; is he Australian? Creole? New Englander? Very few times does he have even a hint of the Cockney accent he's supposed to, and since McDonagh seems to be the main protagonist the story follows, it made the book nearly unlistenable. But the story I'd say is worth it, and if you don't have the time to read the physical book, I recommend this recording.

Great voice Acting, good story with strong characters. There are some great lines in this book! makes me want to replay the video game.

Ties in nicely with the games

The book fills in much of the backstory that was just hinted at in the games, and serves to tie together the plot from both Bioshock games. No real surprises, but it did make me want to go back and replay the first game, and finally finish the second. If you were a fan of the Bioshock games, then you'll want to buy this book. If you were not, its still a good read, though not very subtle or particularly well-written. That's not really a knock against the author - the story had enough twists on its own, but he's working within a very rigid framework, more so than other works set in rich IPs.