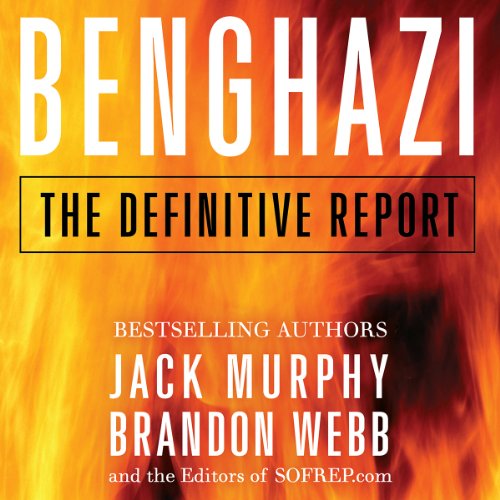 Written by the team of former Special Operations warriors who run SOFREP.com, here is the definitive account of what happened before, during, and after the deadly Benghazi attack.

On September 12th, 2012, Brandon Webb learned Glen Doherty, one of his closest friends and his former Navy SEAL teammate, was killed alongside Ambassador J. Christopher Stevens and two other Americans when the U.S. State Department and CIA headquarters in Benghazi, Libya, were sieged in a shocking terrorist attack.

For the next four months, Webb and his team at SOFREP.com, the world's premier Special Ops website, embarked on a relentless investigation to understand exactly what happened to their countrymen, as well as the roles played by the Obama administration, State Department, and CIA. Drawing on unmatched sources, they spoke to individuals who would talk to no one else, including fellow Special Operations team members familiar with the African theatre, and well-placed contacts in the Washington intelligence community. This is their report - an unforgettably gripping minute-by-minute narrative of the events and their aftermath as they really unfolded on that terrible day in Libya.

If you are looking for a near complete absolution of President Obama's handling or mishandling of the Benghazi, Libya debacle, this is your book. The authors rely on the word of Obama appointees; his Joint Chiefs Chairman, Gen. Martin Dempsey, for example, who acts like a surrogate rather than a wise counselor to his Commander in Chief.

The authors rejected reports that General Carter Ham (Commander, U.S. Africa Command) in violation of orders, attempted to aid desperate American officials under siege in Benghazi for which he was relieved of command. "Great story, but completely false," the authors say, citing Obama appointee General Martin Dempsey who wrote:

"The speculation that General Carter Ham is departing Africa Command (AFRICOM) due to events in Benghazi, Libya on 11 September 2012 is absolutely false. General Ham's departure is part of routine succession planning that has been on going since July."

The authors wrote: "Contrary to the many media myths about Benghazi, requests for help were not denied by the Obama administration."

So there you have it. "Definitive!"

Part sounded interesting but I have wide knowledge of international relations and military battlefield issues so it was not surprising what I heard. Part of it sounded like conspiracy theory though. But worth the money

fascinating book and report. it is amazing the details we are not told in the media. this book covers it all. 👍🏻👍🏻👍🏻👍🏻👍🏻

Seems to be well researched but really no way for the average person of knowing for a fact if this is a definitive report, could easily be someone else's propaganda. Really hard to get into it and struggled getting through this book till the end. Also not very fond of the narrator for this type if audiobook.

didn't finish it. narrator was dull and painful to listen to. do not recommend. waste.

Great background and historical info for "13 Hours." Gives more perspective on who was involved and the facts about blaming a cartoon video for what happened. This area has been a hot bed of issues for the west since the 1700's

Would you try another book from Brandon Webb and Jack Murphy and/or Melinda Fleming and Salomon Maya ?

What could Brandon Webb and Jack Murphy have done to make this a more enjoyable book for you?

Provides additional insight and adds to the understanding of the events surrounding the attacks on the U.S. facilities in Benghazi. But does not answer the basic question of who was responsible and what is being done to prevent similar mistakes.

Would you ever listen to anything by Brandon Webb and Jack Murphy again?

An American you can understand as narrator would help to start. Really cannot gauge the book since did not comprehend most of what was said. Extremely thick British accent not my idea of a book about spec ops.

I loved "The Red Circle", but honestly I did not really get much out of what I listened too. Seemed like it was rambling on one op to the next. I am very disappointed.

Written to make a quick dollar

As time will tell, Brandon Webb, got many of the facts wrong he claimed to have attained from sources. Webb simply wanted to make a quick buck off of the killings of these great men and projected himself as some sort of knowledgeable insight having truth teller. The reality of it is that he spectulated on most of these issues and regstated much of what the press was saying about this issue in the weeks and months following the tragedy. Webb is a liberal self promoter who has white washed the true facts of Benghazi. He paints Hillary Clinton as pretty much innocent and doesn't appear to have done much homework before writting the book.

First, if you can get past the female narrator with a non-uk British accent ( I would have much rather heard the author’s voices), I do not know how you write a book on Benghazi and never mention the Secretary of State while concluding that this was Ollie North’s fault. I try to maintain an impartial view and wanted to know more about what truly happened to an “embassy” of the most powerful nation ever. Obama gets a pass AND September 11 date of the attack was merely a coincidence. Go figure 1/365th chance. Don’t waste your time.