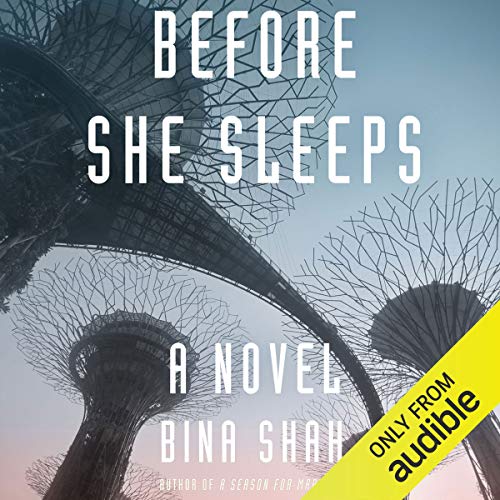 “Fans of The Handmaid’s Tale won’t want to miss this one.” (Publishers Weekly)

In modern, beautiful Green City, the capital of Southwest Asia, gender selection, war, and disease have brought the ratio of men to women to alarmingly low levels. The government uses terror and technology to control its people, and now females must take multiple husbands to have children as quickly as possible.

Yet there are some who resist, women who live in an underground collective and refuse to be part of the system. Secretly protected by the highest echelons of power, they emerge only at night to provide the rich and elite of Green City a type of commodity no one can buy: intimacy without sex. As it turns out, not even the most influential men can shield them from discovery and the dangers of ruthless punishment.

This dystopian novel from one of Pakistan’s most talented writers is a modern-day parable, The Handmaid’s Tale for repressed women in Muslim countries everywhere. Before She Sleeps takes the patriarchal practices of female seclusion and veiling, gender selection, and control over women’s bodies, amplifying and distorting them in a truly terrifying way to imagine a world of post-religious authoritarianism.

I was excited for this book based on being an Editor's pick on Audible. Having finished it, I really don't understand why it was recommended. I kept waiting to care about the main character or to learn more about the society but it never went past the surface. At times it read like a bad romance novel with a cliche love story. The narrators are good which is the only reason I was able to finish.

overall I found this book disappointing. I am not quite sure why it was on an editor review list. the story was cliche with very little character development.

the concept was interesting.

I liked the idea of the story and the Utopian time. I just feel like the end came abruptly and there were some loose ends that need tied up. I am hoping there is a sequel coming to clear up some questions I have.

I was really hopeful about this novel. I had read several poor reviews before selecting it, but I decided to give it a chance. That was a mistake.

The story starts strong. I was intrigued by the dystopian concept, and the acknowledgment of the power and gifts of women. But this novel quickly devolves from a minimally empowering dystopia, to a garbage fire of meek women who must be saved by the acts of men. That in itself was enough to make me stop listening, but I really hate leaving stories unfinished, so I continued. We start with a few core characters, and their development is okay; then, there are suddenly fifteen characters and their development is so hurried and unfortunate that you just don’t even care anymore to even keep track of who everyone is, and what their overall role may be in the plot.

I also hated the voice acting. Especially the “Ruben Pharaoh” voice perpetuated by the voice actor for Lin. So cringe. Sabine’s “damsel-in-distress” voice was grating on the ears and nerves.

Overall, I do not recommend this novel. It had some promising ideas and concepts, but fails to deliver on the start of a strong storyline.

I was so surprised when the story ended. I thought that was just the setup for the story! there was an idea and then that was it, nothing happened! Felt like a short story. I don't know what the point of it is. It's like Handmaid's Tale but written by your friends kid, you'd never have read it but you wanted to be polite.

This book was exquisitely written. I was captivated from start to finish. Nina Shah builds and molds complex characters living in an even more complex society. The narrators did an amazing job at giving color to this great story. Very worth the read.

It seemed a little derivative of A Handmaids Tale, but I took a chance. Glad I did. The characters and story drew me in to the point that my attention didn't stray while listening. That's quite a feat!

struggled to finish. typical. boring. there is not much to the story. nothing exciting about the book

Started out interesting but ended up corny

I liked it at first but it descended into a young adult romance which was not what I was expecting. The dialogue became a soap opera.

I was waiting for answers

There are many unanswered questions in this story and I didn't feel a fun sense of suspense, more of just reading to finish. That said the characters are wonderful and the voices are wonderful. It just felt like a first book, like a first chapter in the story. I'm excited to learn more.