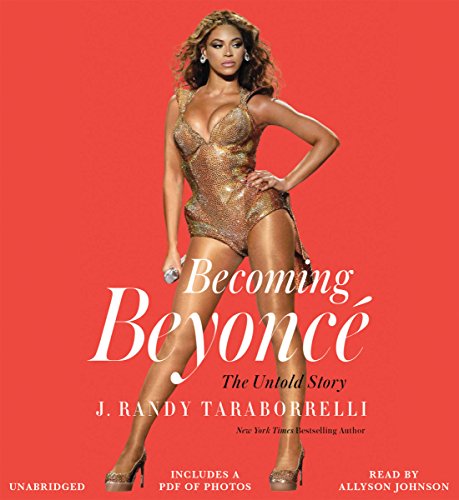 Beyoncé Knowles is a woman who began her career at the age of eight performing in pageant shows and talent contests, honing her craft through her teenage years until, at the age of 16, she had her first number-one record with Destiny's Child. That hit-making trio launched Beyoncé's successful solo career, catapulting her, as of 2014, to number one on Forbes' annual list of most wealthy celebrities - the same year she made the cover of Time. Becoming Beyoncé is not only the story of struggle, sacrifice, and what it takes to make it in the cut-throat record industry; it's the story of the great rewards of such success and the devastating toll it often takes on the human spirit.

The reader was HORRIBLE!!! Almost offensive!!!

What was one of the most memorable moments of Becoming Beyoncé?

All of it was memorable. Impossible to pick just one.

Yes. The performance was appalling.

I can't stress enough how bad the reader was!

boring average very few revelations. no recommendation. you may as well read the Enquirer. I want my audible credit back.

DRY AS A BONE...AND HEARD IT ALL BEFORE ON BLOGS..

If the material had not been recycled from old articles and interviews that had already been exposed over the past 15 years. I kept waiting for something NEW or insight.....
why on earth was this book 18 hours? The first 1/3 of book is well researched, but after that everything felt recycled from interviews already given and fully availble online. And if you are a fan, you have ALL of this knowlege.....Please don't waste your money....

Has Becoming Beyoncé turned you off from other books in this genre?

Yes, I had placed other books this author had done on Marylin Monroe, Michael Jackson, Dianah Ross, delted them all from my list of ones to get.

yes, but maybe some serious editing needed....as far as 18 hours. I thought I was getting something good. It only emphasized what we already know about Beyonce, hard worker, gives 100%

i kept waiting for the big reveal. It is well documented by words herself in the press and her own documentary in Life is but a dream. and countless other magazine interviews.

Way too long...way too boring

I have read books by J. Randy Taraborrelli before. They were not bad, so I was excited to download this book, even though I am not a Beyonce follower.

Sorry, but this was painful. I cannot believe it took this long to basically say the same things over again. Nothing was really exciting and it was pretty boring to say the least.

I will not get those 19 hours i spent listening to this book back.

For those Beyonce fans...don't bother, you will be frustrated.

Has Becoming Beyoncé turned you off from other books in this genre?

Not even a little.

When the narrator was reading the male parts, she tried to sound like a guy...it sounded terrible.

trust me it's mostly about Matthew Knowles not Bey

The narrator made this difficult

I would encourage Audible to use a narrator who can familiarize her or himself with the Hip Hop dialect more authentically. I have heard many of the people in the book talk in interviews and while there is a Southern accent, the narrator made them sound uneducated and more "urban" than they really were. It sounded like she based her voice on what she thinks Black people sound like. It was borderline offensive.

This book didn't really tell me any new revalations but it was somewhat entertaining. I was intrigued with the team of people involved in Beyonce becoming a star. It was ok. Way too long, but good listening on road trips.

This book brought me so much joy to get to know her better! She is Amazing

What can I say about this book?! It was like listening to the life of Diana Ross or Michael Jackson. With respect to them of course. Beyonce has lived a FULL LIFE already. It was really interesting to learn how hard of a worker she is. She truly does go all out since she was a kid. But really, if you are a fan...or even just curious. This book goes from birth (maybe even before birth) to almost present day. A very well written timeline. I am pretty sure she is behind the writings of this book. I doubt it is unauthorized. It was too detailed and done in great taste. What I loved about the book was truly the info that I never knew, about her mom, her family, her upbringing, Destiny's Child. As well this book did not hold back. Obviously, Lemonade was not out. But it did touch on just about everything we hear about in relationship to Bey and her lifestyle. The craziest thing though I heard was that she has a camera crew that follows them taking photos and video for her personal collection. That sounds a bit excessive...but she is a diva! I liked her much more after listening to this book. You cannot help but have respect for her and artists in her league. She worked her way to the top...along with her family. Her talent is undeniable but you get a sense from this book that it took a ton of determination. Makes sense why not all artists make it. Furthermore, She is truly a loyal girlfriend. In all her relationships she has been tested and even though she is absolutely a pretty girl, she was very much a good girl, quiet, patient. Interesting to learn this about her. But then again, her mother has quite the tragic love history herself. Anyways, a great and fascinating book. It was much more interesting than I expected it to be and much more about her as a person as well as an artist. Which was nice! Good book to listen to on a trip! Fun and light. Definitely a good book for fans of music in general...or of hard work ethic! Right up there with any business book in some respect.

This was an interesting read. J Randy Taraborrelli also wrote the book for Michael Jackson. There was so much more information revealed in that book, however this was a nice audio book and I'm surprised I got through it so quickly.

This was a very long and extensive audiobook. One could say it was more so a biography on Beyoncé and Mathew Knowles.

There was much focus on the beginning of her life and career but not much on her most recent years. Beyoncé being as sheltered as she is, I'm sure there is not much one could dig up on her most current life. I learned a lot about how she entered the industry, the many controversies the surrounded her, and of course, her first love.

Overall, it was certainly worth the almost 20 hours.

One thing to note, the reader mispronounces Beyoncé many times in the book.