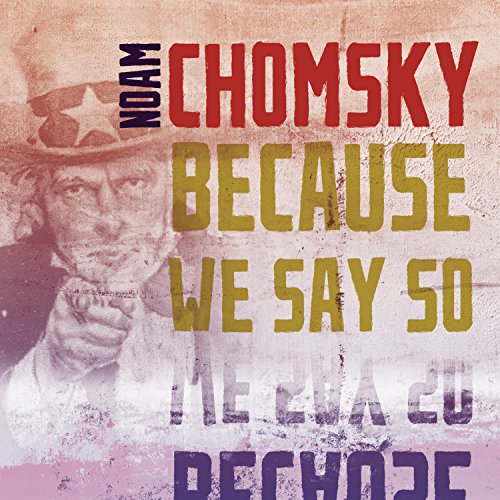 Because We Say So

Because We Say So

Because We Say So presents more than 30 concise, forceful commentaries on US politics and global power. Written between 2011 and 2015, Noam Chomsky's arguments forge a persuasive counternarrative to official accounts of US politics and policies during global crisis. Find here classic Chomsky on the increasing urgency of climate change, the ongoing impact of Edward Snowden's whistleblowing, nuclear politics, cyberwar, terrorism, Iraq, Afghanistan, Iran, Israel and the Middle East, security, and state power as well as deeper reflections on the Obama doctrine, political philosophy, the Magna Carta, and the importance of a commons to democracy.

Because We Say So is the third in a series of books by Chomsky published by City Lights Publishers that includes Making the Future (2012) and Interventions (2007), a book banned by US military censors. Taken together, the three books present a complete collection of the articles Chomsky writes regularly for the New York Times Syndicate and are largely ignored by newspapers in the United States. Because We Say So offers fierce, accessible, timely, gloves-off political writing by America's foremost public intellectual and political dissident.

An antidote against American ignorance

Evidence like this must start a wildfire of action and a new thinking paradigm if we are to survive, much less find harmony between different social groups. You'll get very direct facts here to teach you to question and judge for yourself, unlike most history classes, social science classes, and media that would have you indoctrinated with ignorance.

The texts are concise and well written. There is a bit of repetition though and no one topic is analysed in depth due to the fact that the book is mainly a series of commentaries sent to the media.

Narration is so off for this book

Overall a good book. Not my favorite Chomsky but still very insightful and eye-opening. But the narration!! This was the wrong reader for this book all the way. This guy probably would have done well with reading a spy novel or something but not non-fiction. I found it so bothersome I had to pause listening multiple times. If you're interested, I'd buy the book.

This book is just Jew hatred, I want my money back