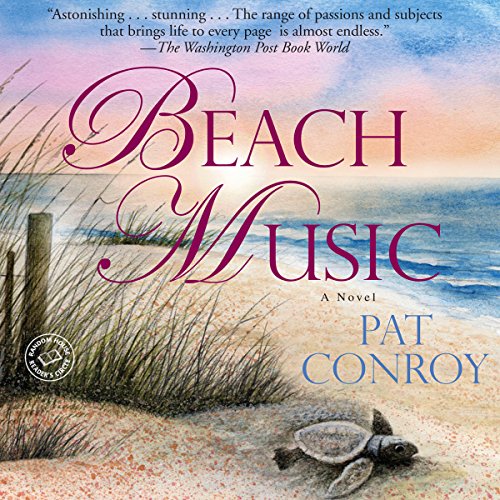 Pat Conroy is without doubt America's favorite storyteller, a writer who portrays the anguished truth of the human heart and the painful secrets of families in richly lyrical prose and unforgettable narratives.

Now, in Beach Music, he tells of the dark memories that haunt generations, in a story that spans South Carolina and Rome and reaches back into the unutterable terrors of the Holocaust.

Beach Music is about Jack McCall, an American living in Rome with his young daughter, trying to find peace after the recent trauma of his wife's suicide. But his solitude is disturbed by the appearance of his sister-in-law, who begs him to return home, and of two school friends asking for his help in tracking down another classmate who went underground as a Vietnam protester and never resurfaced. These requests launch Jack on a journey that encompasses the past and the present in both Europe and the American South, and that leads him to shocking--and ultimately liberating--truths.

Told with deep feeling and trademark Conroy humor, Beach Music is powerful and compulsively readable. It is another masterpiece in the legendary list of classics that his body of work has already become.

"Astonishing...stunning...the range of passions and subjects that brings life to every page is almost endless." (The Washington Post Book World)

Patrick Conroy hurls words and ideas at you and they all land in a perfectly harmonized formation of drama, humor and outrageously engaging characters. His gift for creating characters from words on a page to larger than life people is magnificent. Beach Music incorporates some very difficult topics and weaves together a number of complex story lines, which intertwine in this multi generational epic. In all his books he is excellent at depicting dysfunction in families and this book is no exception.
Beach Music is essentially about Jack McCall; a single dad trying to raise his little girl Leah in Rome after his wife Shyla commits suicide. He wants to get far away from the dysfunction of the families and demons he leaves behind in South Carolina. But your roots are your roots, and circumstance brings Jack back home like a slingshot to the epicenter of drama. He is catapulted in to the lives of his 4 brothers, the most interesting of which is John Hardin his paranoid schizophrenic sibling, his mother who is battling cancer, his holocaust survivor in-laws who tried to take Leah in a dirty custody battle and old school friends who are not without major drama which peaked during the time of the Vietnam war. Beach Music had me laughing, thinking and sobbing. It's one of those books you need time to savor. I hate saying goodbye to these people who have become part of my life, albeit for a short time. So sorry to see it end.
As for the narrator Jonathan Marosz, he neither helped nor hindered this book. His narration was a bit flat, but once I got used to him, it blended well.

The story is wonderful, I have read it in print years ago....but the narrator was terrible.

I love Pat Conroy novels and this one is not an exception...

He is horribly monotoned and I was not able to follow the change in characters at all! The story became one blob of monologue!

Frustration because I knew the story to be a great one, I just could not make myself stick with it with this narrator! I wasted my money on this one.

Someone with a convincing SC accent, or no accent at all.

Would you be willing to try another one of Jonathan Marosz’s performances?

I adore this novel. I've read it several times, and since I enjoy long audio books, and this one had such a high rating, I thought I'd give it a try. I gave up after the first hour of listening. I don't know where the narrator is originally from or where he learned his accent from, but it was unlike any South Carolinian accent I've ever heard. It sounded more like a Bostonian attempting a Texan accent. It was jarring, clipped, entirely too fast, and inconsistent. Moreover, his reading of the story was flat and uninspiring. I felt like I was listening to a news report from someone who didn't much care for what he was reporting on.

I adore Pat Conroy, and Beach Music holds a special spot in my heart as the first novel of his I ever read, but this rendition does it absolutely no justice. I've never given up on an audio book before because of a narrator, but I just couldn't stand to keep going with this one.

very dramatic and heart felt! I read it because it relates to my favorite vacation spot but I have been looking for additional titles from the same author..I highly recommend it!

Pat Conroy has an almost lyrical way of expressing himself and that is all the more evident in the audio production of this book. The beauty of his words holds true even when the event is painful or horrific. It is a captivating tale filled with sarcasitc wit, family secrets, and tragedy on an epic scale. The South is always a character in itself in his novels and this one is no exception. This is one of my favorite Conroy novels, and I frequently give it as a gift to friends unfamiliar with his work. Take a trip to Pat Conroy's South and you will never quite look at it the same again - but it will seduce you just the same.

Would you listen to Beach Music again? Why?

I will listen to it again, because it grabs you and won't let go. If it were just the dialog itself it would be enough, but there is so much more!

What other book might you compare Beach Music to and why?

Forest Gump comes to mind as a piece of comparable work and not just because of obvious subject matter, but because of its powerful story telling, and smart dialog.

Who was the most memorable character of Beach Music and why?

Jack, because he has an unapologetic way of honestly speaking the truth and what's on his mind.

This book is thought provoking and intelligent. Brings South Carolina to life in so many ways. Makes you long for that "Beach Music"

Pat Conroy is just the best storyteller. This book as with most his books is just wonderful. The characters are very interesting and the book is totally engrossing.

I would recommend this book to anyone who loves beautiful writing, characters you fall in love with and story that is hard and heartbreaking but resolves in a way that leaves you smiling with your heart full.
I have read his books but really appreciate what an excellent writer and poet he is when i hear it read out loud.
This is a rich beautiful novel that you won't want to be over.

I absolutely loved this book. The author had me from the first chapter and the relationships in the book were at times so touching and others completely hilirous. I had never read any of Pat Conroy's books. I am now a huge fanl.