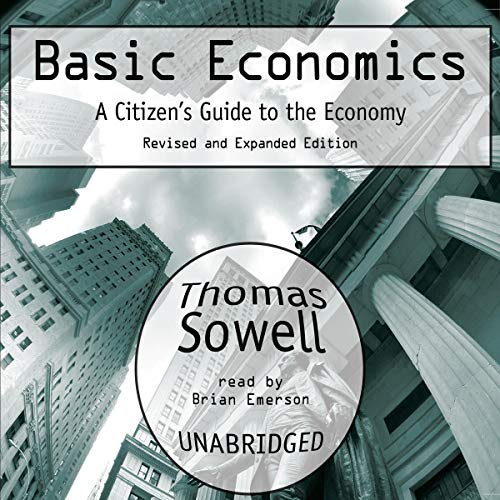 Thomas Sowell has a different idea about how economics should be taught. With this groundbreaking introduction to economics, Sowell has thrown out the graphs, statistics, and jargon. Learning economics, he believes, should be relaxing - and even enjoyable.

Sowell reveals the general principles behind any kind of economy - capitalist, socialist, feudal, and so on. In understandable language, he shows how to critique economic policies in terms of the incentives they create rather than the goals they proclaim. With clear explanations of the entire field, from rent control and the rise and fall of businesses to the international balance of payments, this is the first audiobook for anyone who wishes to understand how the economy functions.

In this edition, Basic Economics has been revised and expanded to address the new concerns of the 21st century. It's focus has become more international, including the range of economic problems faced by foreign countries around the world. Each chapter reflects the experiences of many different peoples and cultures. In his straightforward style, Sowell demonstrates that the basic principles of economics are not confined by national borders.

A mind opening consideration of Economics.

Fantastic book, one that gets one thinking in a different way about economics than is generally promoted by society today. Good narration, the only reason I held off on 5 stars is that on occasion, some very minor background noise could be heard, but wasn't overly distracting.

This book is a masterpice. Easy to understan and filled with facts and references, leaving emotional and moral grandstanding in the dirt. I have already told several friends and acquaintances about the book and I hope the authors other titles hold the same standard, I have already added many of the authors books to my wishlist. I cant think of anything substantial missing in the preformance, I would have liked a pdf though. But ”there is never enough of anything to fully satisfy all those who want it.” : )

Never, In all of my years of study, has economics been so thoroughly and clearly explained. Dr. soul speaks not down to you but directly feed your mind in a way that is so easily absorbed. There is no better way to fully understand the benefits of capitalism and a free market economy in to read this book

Tom Sowell should be required “reading”.

Basic Economics should be required reading for all citizens, especially those who vote. Tom offer a thoughtful and rational approach with solid examples of how economics “actually” works. He’s artfully able to set aside feelings and politics for logic.

Sowell at his best

Dr. Thomas Sowell has written a long and thorough masterpiece explaining the core tenets of economics and gives a tour de force defense of the need for free market systems.

A must for anyone wanting to help others. This was a great book for someone who hasn’t been educated on economics! This book has shaped my future outlook on voting and using my money.

Sowell's works should be required reading in high school to ensure an economically aware populace!

This is my bible

Every human being on earth should read this. This should be retitled as "the guide to objetive reality of the world"

clearly written and read without jargon or equations. some of it was unexpected, but I now have the basic concepts of a subject matter which totally new to me.

I can hear an echo of the reader and it is making it harder and harder to listen. Sometimes 3 words will be repeated 3 times. It is very annoying. It only happens in the pauses but I don’t know that I’ll finish it just because of this.