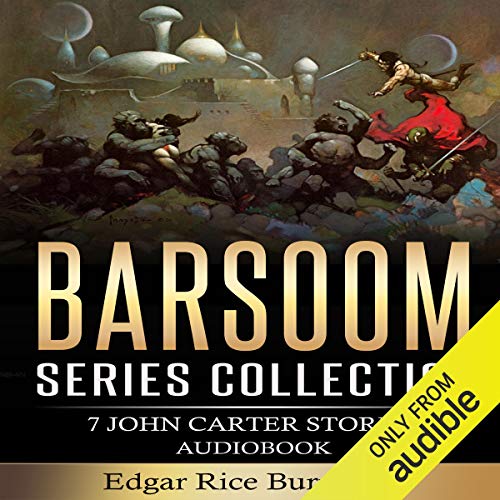 Barsoom Series Collection: 7 John Carter Stories is an audiobook collection of seven novels/stories of John Carter by Edgar Rice Burroughs. It will transport you to a fascinating new world unlike any other. Join John Carter as he finds himself on another planet beyond his deepest imagination - Mars, with almost a complete lack of resources.

Edgar Rice Burroughs' writings are inspired by a number of science-fiction writers and even some scientists who were dedicated to learning more about extraterrestrial life and ventures in space exploration. This infamous, well-written piece of literature by Burroughs has also been adapted by a number of writers in short stories, novels, films, and comics. Enjoy these must-hear novels in a beautifully narrated audiobook. It includes:

Follow John Carter as he travels through the desolate landscape of Mars. Experience adventures full of feats of daring and dazzling swordplay!

First of all, I want to clarify some things.

1) Burroughs writing is amazingly descriptive, but we knew that

2) The narrator does a great job of making you think John Carter is in the room reading you his very own manuscripts.

Ok, so why the title and low ratings?

3) The “production value” of this is lacking. There were many many times when the narrator reads the same line twice in a row. I don’t blame the narrator, I blame editing.

Fixing these problems and adding even “Invisible Men of Mars” to this collection would make it a phenomenal and indispensable Barsoom collection.

Classic Story with Expert Narration (and with an extra benefit)

I was about 12 years old (I'm 70 now) and nosed around in my parent's small library and came upon "A Princess of Mars" and pulled it out and saw the illustrations by Frank Schoonover and wondered "what IS this?" Well, I found out and became a big fan of the John Carter series.

As I aged, I moved on from Burroughs not because it wasn't entertaining to read his books but because...well...you just "move on" to other things throughout your life, right?
Fast-forward all these years to now (2016) and by now maybe I'm a little like you (since you are reading this) and listening to Audiobooks while working or driving. It was while looking over available titles at Audible that I saw "The Complete Barsoom Series" and what looked like a stunning Frank Frazetta painting so naturally I clicked on that.
Sure enough there were 54 hours of all the John Carter stories and, coincidentally, it turns out that I actually know of the narrator, Eric Vincent. Mr. Vincent, a talented illustrator, comes from what can be called an "enriched environment" in that his parents were college professors in English and very active in the theater scene, so, naturally that should give him an edge in the narration department.

It definitely did. I THOROUGHLY enjoyed (sorry for shouting) every minute of this entire series!

Well, ok, not every minute. Because from time to time, I would get caught up in something I was doing and realized "wait, how did we get to this part?" and either rewound to where I remember tuning out or just decided that I didn't miss much and forge ahead. Nevertheless, it was a fun time listening to Mr. Vincent make those stories come alive once again. In spite of the length, it seemed like the time just flew by and I was sorry to see the presentation come finally to an end.

I see other reviewers have talked up Burroughs "innovate" use of Science--he actually foresaw many future technological advances--and his mastery of tribal anthropological and cultural structure. Yes, that's true but at it's heart it's either a rousing adventure or a classic love story or just a combo of both. However your take on it, you'll find that it's super-entertaining.

Yes, I will mention something from the other reviews, I noticed that one reviewer faulted Vincent for a "meek librarian" voice and, have to say that I just didn't get that at all from listening. I'm guessing that the reviewer didn't get very far into the story because, yes, while Mr. Vincent seemed to be searching for the characters a little bit in the first chapter or two, believe me, from the time that John Carter is being pursued by Apaches before he even GETS to Mars, Mr. Vincent had me listening intently. As far as the "librarian" reference (no pun, really) Mr. Vincent's voice is what would be called mid-range. Not a deep, hairy-chested voice nor a--here we go again--meek librarian voice, it is a pleasant and easy-to-understand mid-tone that subtly takes on the personae of whatever particular character is in play at the time. This is important.

Speaking of which, this "easy to understand" aspect of the narrator, I would like to point out that his English/Theatre experience causes him to per-fect-ly e-nun-ci-ate every word without us English-speakers noticing, but I will bet that those folks for whom English is a second language or are trying to learn English will love this guy. This is the "extra benefit" I was referring to in the title so if you are learning English or know someone who is trying to, you might pass this on to them.

****
If you don't know anything at all about the series or don't quite remember what it's all about, then here's a quick overview from David Adams (and he's just talking about the Trilogy--we have all SEVEN titles to play with):

This was the first novel penned by Edgar Rice Burroughs. It was written when he was 36 years old after he had failed at nearly everything he had done in life. It tells the story of an Earth man's adventures among strange races on Mars. The Earth man's name is John Carter, and Mars is called Barsoom. The first title of this novel was, "Under the Moons of Mars."

There are two main groups of beings in this novel. The green Martians are the bad guys, odd beings with four arms and tusks growing out of their faces. The red Martians are the good guys, human-like, and John Carter falls in love with one of them, Dejah Thoris, his Princess of Mars. Everyone fights and loves in a strange environment. The most amazing thing about the novel is the fact that it is quite a good one even after most of a whole century has gone by.

This is an early science fiction novel published in 1912 in a pulp magazine called "The All-Story Magazine" before science fiction was called by that name. Burroughs is one of the grandfathers of the genre. Outer space novels like this one were published by Jules Verne and H.G. Wells, but most writers at the time kept their characters firmly planted on terra firma.

A Princess of Mars is a cliffhanger, so you have to read the next two novels of a trilogy to find out what happens in the end. These novels are called, "The Gods of Mars" and the "Warlord of Mars." Incredible as it may sound, these two novels are as good as the first one. The Mars Trilogy of Edgar Rice Burroughs may not be one of the treasures of Western Civilization, but it can make time pass pleasantly on this planet. Most writers should be so lucky.

These John Carter stories are of course great. They may strike some as cliche but they are where the cliches originally came from. Countless other hacks have endlessly borrowed or stolen from Burroughs. Without him there would probably be no Superman, Captain Kirk or even Luke Skywalker.
The narrator is perfectly adequate, however the production values are very shoddy. Countless narration mistakes are left in. Those mistakes that have been edited are bracketed by loud clicks and pops as from cheap audio recording or editing equipment. I expected higher quality from Audible at $29.95

I had never read a John Carter story before this series. The popular fiction of my youth was the Conan Saga by Robert E Howard and anything by Ray Bradbury. Both of these authors came well after Burroughs and I would bet that both owe him something for his ideas of Mars and his swashbuckling style. The first book of the Barsoom series is an origin story. About a Civil War veteran who is mysteriously transported to Mars and who is gifted with certain physical superpowers because of low gravity. Above all he is a fighter and a warrior.

Burroughs has taken some basic facts about Mars known in the early 19th century and science in general and extrapolated an interlocking play of ecosystems, biology, tribes and cultures. The people, plants and animals are all connected by an astoundingly imaginative evolutionary process. John Carter goes on fighting and doing his thing against this very rich and complicated background of tribal and societal relationships.

Besides the ecological and cultural imaginings, Burroughs also is innovative in his use of science. He posits that nuclear energy has different "rays" with different properties. One is a repulsive property that can be harnessed to allow air ships to move about. Other rays can be used to generate power and that power is used to renew the water and atmosphere necessary for life. We learn that Mars used to have water and atmosphere but as time went on they had to be constantly regenerated by engineered means. There is a lot of innovative thought contained in these stories and that makes it good science fiction.

I'm nearly to the end of the second book of this collection and will have to step back soon because of the saturation factor. But they are good enough and entertaining enough that I will be back to finish them.

On the matter of the narration by Eric Vincent, I have thoroughly enjoyed his mastery of the craft. The emotional emphasis he conveys about the the grandeur of the planet, the drama of the action and the astonishment that John Carter feels with each new discovery makes this a page-turner.

Well, I'm not even through the first book (of a Great series!) and I was compelled to write this review now due to the crappy production values. I can't believe the quantity of pops, clipped audio, and sloppy editing going on here. I only gave it 3 stars because I couldn't bear to mar such a great work of fiction with any less.

The narration is sophomoric, but tollerable, I beleive Thuvia, Maid of Mars is by far the narrators best work in this compilation. I can't complain too much as 7 books for 1 credit is such a deal I'd have listened to it had Gilbert Godfrey been the voice actor.

well worth the purchase for the fans of John Carter.

no way to tell when other books start. no chapter titles . cannot tell or start a Different book

Classic works which have inspired creative minds for a century, but a recording obviously unedited.

loved it, a woman should have read the woman's part. enjoyed the stories of john carter and family, kinda got lot of the other guy's story

I read the other reviews and decided to try it anyways. I should have listened to the other reviews. The story was good - I liked the movie. But the narrator of this audio book made it hard to listen to and I couldn't get passed a few hours of listening to it. His voices for the characters was lacking, the inflections on words was weird. The editing was just as bad as the narrator.

Maybe I'm being picky but buyer be ware. The narrator in my opinion made this book really hard on the ears.