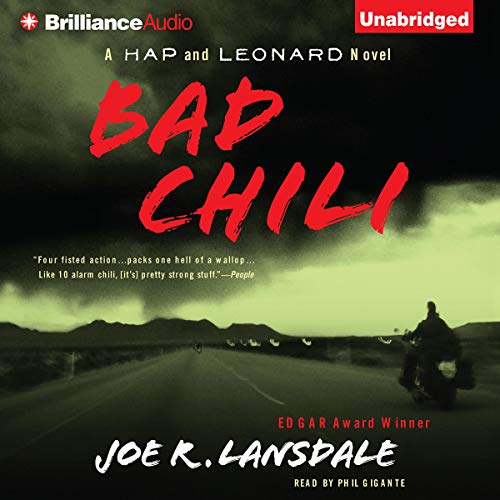 Hap Collins has just returned home from a gig working on an off-shore oil rig. With a new perspective on life, Hap wants to change the way he's living, and shoot the straight and narrow. That is, until the man who stole Leonard Pine's boyfriend turns up headless in a ditch and Leonard gets fingered for the murder.

Hap vows to clear Leonard's name, but things only get more complicated when Leonard's ex shows up dead, too. o the police, it is just a matter of gay-biker infighting, but to Hap and Leonard, murder is always serious business, and these hit a little too close to home.

Yet one more good book

I love this series. I feel so attached to them I want to see how it ends (get there as soon as I can) as it will be a mess, but will also somehow be OK. then get there and wish it wasn't over.

Hap & Leonard are addictive. The characters are well drawn, memorable, & believable. The Sundance channel has produced a series based on the Hap & Leonard books.

another cool one on the series. one of the best things that happened to me in latest years, bookwise.

An other great story

It was really cool seeing an unexpected character show up, and yet again an other great story. Can't wait to continue this series

A solid entry in the series

I didn't enjoy Bad Chili quite as much as the first 3 Hap & Leonard books but as this review title says, it's a solid entry in the series. The book starts off with a hilarious sequence involving a squirrel but gets bogged down a bit in the middle before finally getting to the point. It's full of the humor, action, dark criminal activity and friendship that mark this series but for me, the plot wasn't quite up to the admittedly high standard set in the first 3 books. Nevertheless, like every book I've read from Mr. Lansdale, this one was worth the time!

Love the Book and narration!

I really love the Book and I give credit also to the narrator. The different characters he creates is amazing. I started with the first one and just couldn’t stop. I’m ready for the next one! Hap and Leonard’s relationship is so incredible I can’t wait to see what mystery they saw and what craziness they’re going to get into I’m sad that I’m just getting to the books now I wish I would have read them years ago.

love it and hate it.

it followed Hap and Leonard standard but the reading needs two different voices for the leads.

a wild but satisfying ride

wow, what a story. very greatful for the ending and for not tearing my heart out at the end like Lansdale sometimes does. lol

Hap and Leonard at it again.

As always, a most entertaining adventure

I love the Hap and Leonard series, and this book certainly delivered. Fun and funny but also serious and dark but also full of love for the grit of surviving the human experience.

I enjoyed the great Narration, and the interaction between the various characters. But the main plot left much to be desired.

Keep this Book from your Wife

Leonard created with Hap and Leonard an incredibly funny and unusual pair of heroes, Hap, a middle aged hippy, unconventional, but with his own ethics and values and his friend Leonard, a big black guy, strong and honest and gay.

OK, if by chance a woman is stumbling on one of Lansdale's 'Hap and Leonard' novels, I have to give them a fair warning.
1. This book is an honest book, men really are like that
2. Don't get offended by the language, men like to talk like that
3. If a man has a real friend, he will be that close to him, probably closer than he will ever get to his wife.

The story itself touches on some serious issues, intolerance and racism in small town Texas, domestic violence, corruption and incompetence in the legal system. Even if the storyline is not that unusual, the way it is told. makes it a real page turner.

Leonard's former lover gets killed and together with Hap and Jim Bob, a private eye and quite a character, they try to find the murderer and by doing so, unravel a complex network of crime.

This book is funny and entertaining, but most of all, it rings true and if you are not a prude and stuck up, you will love it.