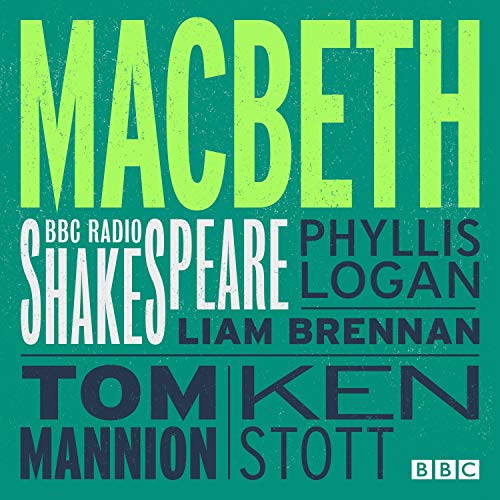 In this BBC full-cast production, a trio of witches predicts Macbeth's early demise.

In a tale of fate, fulfilment and ego, Macbeth and his wife desire the Scottish kingship. Macbeth's temptation and descent into evil, his wife's ruthlessness and subsequent madness and the overarching presence of the supernatural charge this gripping production. Will their conscience, and the prophecy, catch up with them before the crown can be secured?

BBC radio has a unique heritage when it comes to Shakespeare. Since 1923, when the newly-formed company broadcast its first full-length play, generations of actors and producers have honed and perfected the craft of making Shakespeare to be heard.

In this acclaimed BBC Radio Shakespeare series, each play is introduced by Richard Eyre, former Director of the Royal National Theatre. Revitalised, original and comprehensive, this is Shakespeare for the modern day.

Most of the characters were portrayed the way I imagine; I particularly loved the playfulness of the witches (vs. a decrepit croniness). I didn't like the voice for Macbeth. Most disappointing to me is that, gosh, maybe 20%, or more, of the play is cut out. Too much. It's already a short(ish) play.

It was very well acted, however, I was disappointed that so much of the witch dialogue was surpassed.

What a great way to "read" Macbeth. Being done in a play format brings it to life and allows the "reader" to fully enjoy the work of a genius while sitting in the comfort of his or her home.

In general I would say the BBC collection has the highest most consistent quality and production; however this is an exception and it pains me to say it because it is one of my favorite plays with only Hamlet in contention. While I disagree now and then with certain line readings and emphasis, in general as i say, BBC does a wonderful job. BUT, with Macbeth I think they totally miss the mark with tone, emphasis, intensity as well. To make matters worse they trim lines from a couple scenes of an already short play for no good reason as they are content to go several hours with Lear and Hamlet and all the rest.

And whereas other BBC productions explore various emotional readings/interpretations of lines, in this they are all in a slap dash hurry to get to dinner or something. All the lines seem rushed through; there is barely any break between scenes to the point some seem to run together. I would have to say that there is no actor or character that seems thoroughly interested in the story or being in this production.

Sorry BBC, love everything else, but there are far better Macbeths out there, unfortunately not all of which are on audible. I would like to have strictly audio of the Jeremy Brett/Piper Laurie production and would love audio from the Nicol Williamson production. while both have a moment i would like done differently, over all they are great and Nicol is one of the best Macbeths I've seen with some great line interpretations. I have never felt it right when Macbeth is presented as an emotionally weepy type (like he is so often portrayed in the murder aftermath scene and Nicol falls into this also) and Nicol portrays him as a brooding angry warrior type which is more in fitting with the themes.