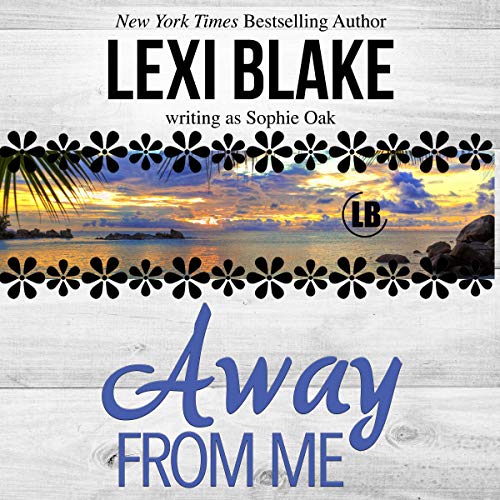 Re-released in a second edition with updates.

Shattered by the loss of his wife, Callum Reed is a man surrounded by rules designed to protect him. He rebuilds his life with careful discipline, but can’t deny what he feels when he meets the lovely Gabrielle Sullivan. She’s everything he wants in a woman, but he views all relationships as contractual. Despite her misgivings, Gaby signs his contract and becomes his perfect partner. Until the night she breaks his cardinal rule.

After three years of perfect obedience, Gaby declares she wants love and she isn’t settling for less. Love isn’t in their contract, so Cal lets her go. But Gaby has a secret reason for leaving. When Cal discovers the truth, nothing will stop him from following her.

On a secluded island paradise, Callum will do anything to prove he’s the perfect husband for his defiant love.

Ce que les auditeurs disent de Away from Me

One of my favorite stories

I love reading this book and now I love listening to it. The narrator just adds icing on the cake.

This was my second the first I read it. Gaby left Cal without telling him she had cancer. When he finds out he is hurt and will do anything to get her back. I understood what Gaby was going through with not wanting anyone to see her scars. I have breast cancer and I have those same scars. This was a good read I loved it

I’m not sure exactly why but I cried throughout this entire book. The narration and story line were amazing!

Another awesome book by Lexi Blake /Sophie Oak! Tons of hot steam!!!🔥🔥🔥🔥 And Sebastian York is fantastic, as always!!!♥♥♥

This is my first ever read by Sophie Oak and I was very surprised. After seeing Dirt Girl Romance talk about this Book on her Instagram and shared a little sneak peek of what was in the novella, I just had to read it. This short read really packed a large punch. There was so much emotion and lots of feels while reading this one. I truly didn’t think or even expected to affect me as much as it did. I’ll definitely reading this author again!

Different than what I expected.

I was surprised by the story & the outstanding Audible reading of Sebastian York. (York’s could read a phone book & I’d enjoy it.) I’m new to Lexi Blake but fell in love w/ the Bliss series. The Bliss series was filled w/ humor, relationships & description so clear you have could be there. This story is shorter so w/ it has less character development but not to the point of ignoring the main characters. (I adore Cody. He’s everyone’s best friend.) I was afraid since this about a couple where he can’t commit & woman trying to find herself after battling cancer it would be depressing. However the messages of compromise, self-respect & the importance of friendship make nether character anything but genuine. I would recommend it to others.

So touching and heart warming. This story will grab your heart strings with its depth of feeling. You'll grow to love both characters as they find their way back to each other by learning truths of the past.

Sebastian York does a good job reading this story of misunderstanding, lack of communication, and brokenness. An excellent conclusion bringing the story to beautiful end.

The narrator did a good job. This was a great love story between Callum and Gaby. I really enjoyed the story and it was very emotional.