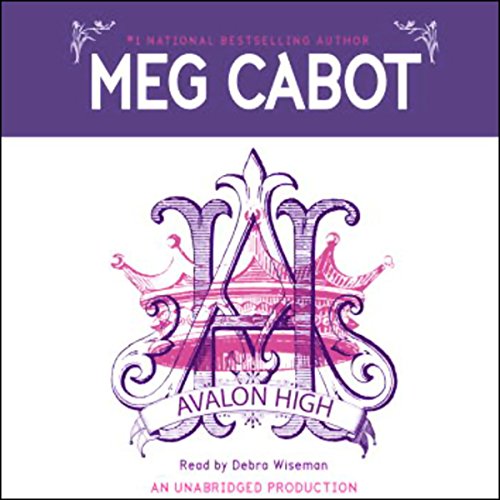 But not everybody at Avalon High is who they appear to be, not even, as new student Ellie is about to discover, herself. What part does she play in the drama that is unfolding? What if the bizarre chain of events and coincidences she has pieced together means, as with the court of King Arthur, tragedy is fast approaching Avalon High?

Worst of all, what if there's nothing she can do about it?

I'm a big fan of the author mediator's serie but I had lots of fun with this one too. Nice story, characters that feel so familiar... Very entertaining ! Still laughing just thinking about it.

Can't say that I had ever read King Arthur, but this rendition wasn't all bad. I liked the book, very little if any offensive material, and I didn't guess the end twist. Pretty decent read

While Inwas playing this book, some parts were skipping around. It was unpleasant to listen to and I hope that you get this fixed.

Exactly What I Needed!

This is one my favorite books of all time, and I was so excited to find it on Audible! I needed something comforting and familiar to help me fall asleep, and this was perfect! The narration was captivating without being over the top, though some of the voice choices were a little odd (Marco's voice in particular was a little distracting). Overall, really it really lived up to my expectations and was great to fall asleep to!

Not quite what I hoped for

Note: This review has SPOILERS. I don't know how to talk about it without them. You've been warned.

I enjoyed this for the most part, but it was a mixed bag. At first I wasn't sure if I even liked the main character, Ellie. She was a little too typical-teenager-whiny right at the very beginning, but soon she started to be different enough that she grew on me. While she was embarrassed by her parents' quirks (as many teens are) it was refreshing that she had a mostly healthy relationship with them nevertheless. I actually started being more annoyed with her parents wanting her to not spend so much time floating on their pool and do "normal" teenage things instead. Like, you'd really rather she spend her after-school time with kids who could bully her or peer-pressure her than read a book in the pool? Really??? This seems to pop up most often in contemporary YA fiction where the parents want their teen to stop doing their quirky thing and be more like other teens, and I just don't get it. Last I checked, most real life parents are a lot more worried about their teens picking up bad habits from their peers and losing themselves by trying too hard to fit in with a certain crowd, not worried that they aren't enough like their peers.

Anyway. I liked that the foreshadowing for who Ellie was supposed to be in the book was stronger (in my opinion) than for her movie equivalent. (I'm sorry movie makers, but if you have to show flashbacks to all the supposedly foreshadowing things in order to prove that you did foreshadow, you might not have done a good enough job.) Whereas the twist of who the main character of the movie version was a total shock for me, I was easily able to identify who she was going to be in the book, in spite of some of the characters getting it wrong.

As for other characters, I liked Will from the beginning. It was nice that he was a decent, upstanding kid with healthy aspirations for the future and not the brooding bad boy. It was also nice that Ellie didn't have to change her quirky, funny ways (in spite of her best friend's suggestions) for Will to like and fall in love with her. I even appreciated that though Will didn't have the best relationship with his dad, he *wanted* a good relationship with him, yet didn't whine about it or rebel all the time because of it. In fact, he even tried to fix it, and though it didn't work, I appreciate that he tried.

I didn't care about any of the characters besides Ellie and Will. Marco was a complete wackadoo with no redeemable qualities, Lance had some redeemable qualities, but I still had no real reason to care about him, Jennifer came off as a one-dimensional, cool cheerleader bubble head who I was annoyed with more often than not. (Not to mention the whole "We tried not to cheat on/betray you but just couldn't help it!" excuse is stupid and I hate it with the fury of a thousand suns.) Also, one of the teachers being a member of a secret sauce organization that shadows kids they think might be King Arthur reincarnated was just kind of... weird? I think Disney made a good choice putting a kid in that role in the movie instead.

On a totally different subject, in this day and age where school shootings are a far too common occurrence, the part where we learn that Marco has stolen his father's gun and gone to find Will and kill him is a little extra disturbing. I know this book was written before that kind of thing started being so common, but it's something some readers sensitive to such things might want to be aware of.

On a related subject, I also felt Marco was defeated a little too easily? Like, he's pointing the gun at Will and Ellie and then Will gets the sword and just commands him to drop the gun and he just... does. It's one of those things that was difficult to explain without the presence of magic in any form because otherwise, the kid was stinkin' nuts and shouldn't have been intimidated by Will holding a sword too far away from him to do anything. I'm not sure what I would have preferred to happen, but it just wasn't that satisfying a defeat to me.

Overall, I'm struggling how to rate this book. I was hoping to like it resoundingly better than the movie, but I actually didn't. I didn't dislike it, but there were still just as many disappointments with it as with the movie. In fact, I kind of want to rewatch the movie now and see if I might actually like it better than the book because I'm starting to understand why Disney made a lot of the changes they made, and I can already tell you even without a rewatch that I liked more of the characters in the movie than in the book. SoI'm going with 3 stars for the book for didn't-love-it-didn't-hate-it.

Fabulous all the way around!

I adore this story, and both the author and the narrator! I only wish that the screenplay were as good.

What made the experience of listening to Avalon High the most enjoyable?

What other book might you compare Avalon High to and why?

hmm , maybe Just one wish by Janette Rallison , and What happened to goodbye by Sarah Dessen , both felt enjoyable at the beginning but felt bored at the end

Which character – as performed by Debra Wiseman – was your favorite?

the book was good , but it lacked depth .. the story interesting but needed more work :)

When I first saw this book, I thought it would be like all those camelot movies that really suck. But it is sooo good and I LOVE Will.