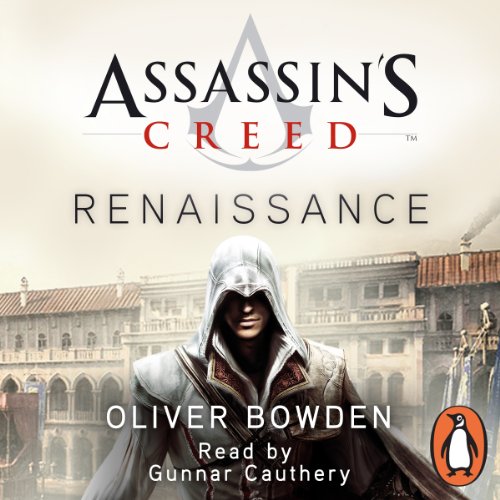 Penguin presents the unabridged, downloadable audiobook edition of Assassin's Creed: Renaissance, a new novelisation based on one of the biggest gaming-media franchises in the world.

Read by the actor Gunnar Cauthery.

'I will seek Vengeance upon those who betrayed my family. I am Ezio Auditore di Firenze. I am an Assassin...'

The Year of Our Lord 1476 - the Renaissance: culture and art flourish alongside the bloodiest corruption and violence. Bitter blood-feuds rage between the warring political families of Italy.

Following the murder of his father and brothers, Ezio Auditore di Firenze is entrusted with an ancient Codex, the key to a conspiracy that goes back to the centuries-old conflict between the shadowy Templar Knights and the elite Order of Assassins.

Ezio must avenge the deaths of his kinsmen and in doing so fulfil his destiny, and live by the laws of the Assassin's Creed.

Truth is written in blood.

Oliver Bowden is the pen-name of an acclaimed novelist.

I've always loved the games, but I thought a book adapted from a game wouldn't be great. I was wrong, the story(the same as the game) is greatly put on words, and the reader does a fantastic job.

very good and thrilling but I expected a more profound story. Go deeper into the story of the game.

Would you try another book from Oliver Bowden and Anton Gill and/or Gunnar Cauthery?

Yes, another book, to see if this was a one off poor writting performance and a later novel might be better.
I will look for another narrator though.

Would you be willing to try another one of Gunnar Cauthery’s performances?

Possibly.
I do not like to single out one individual for a poor performance, especially considering the novel he had to deal with was poor to begin with. But the main concern was the different voices used, while i commend him on managing so many different characters, these sounded like the most Scottish Venetian's I have ever heard.
The various accents realy did not suit the setting.

Id use a spare credit for another of these novels and not pay in the future and I urge you to do the same. Story is not well written, very repeditive and lots of italian thrown in for no good reason. Narrator also uses accents that do not compliment the books setting and period, which adds to preventing the reader from being immersed in the story.

I just couldn't get into it.

It was set in my favorite time period.

I was constantly turning the volume way up and way down. That was very aggravating.

If things were more realistic

Do you think Assassin's Creed needs a follow-up book? Why or why not?

The volume/ narration was very aggravating

An amazing novelization of one of the most interesting video games I have ever played. Did not think I will enjoy that much a story I already know everything about. Ezio Auditore da Firenze is one of the most polished characters the Assassin's Creed series has.