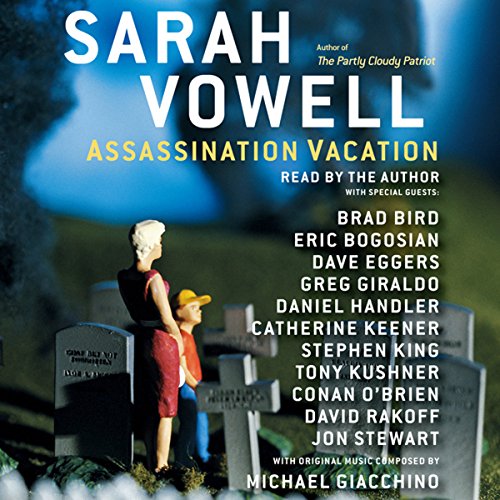 Sarah Vowell exposes the glorious conundrums of American history and culture with wit, probity, and an irreverent sense of humor. With Assassination Vacation, she takes us on a road trip like no other, a journey to the pit stops of American political murder and through the myriad ways they have been used for fun and profit, for political and cultural advantage.

From Buffalo to Alaska, Washington to the Dry Tortugas, Vowell visits locations immortalized and influenced by the spilling of politically important blood, reporting as she goes with her trademark blend of wisecracking humor, remarkable honesty, and thought-provoking criticism. We learn about the jinx that was Robert Todd Lincoln (present at the assassinations of Presidents Lincoln, Garfield, and McKinley) and witness the politicking that went into the making of the Lincoln Memorial. The resulting narrative is much more than an entertaining and informative travelogue, it is the disturbing and fascinating story of how American death has been manipulated by popular culture, including literature, architecture, sculpture, and, the author's favorite, historical tourism.

Though the themes of loss and violence are explored and we make detours to see how the Republican Party became the Republican Party, there are lighter diversions into the lives of the three presidents and their assassins, including mummies, show tunes, mean-spirited totem poles, and a 19th-century biblical sex cult.

"Vowell has a perspective on American history that is definitely funny." (School Library Journal)
"Wacky, weirdly enthralling....This is history at its most morbid and most fascinating and, fortunately, one needn't share Vowell's interest in the macabre to thoroughly enjoy this unusual tour." (Publishers Weekly)
"An engaging tour....Audiobook listeners get serious bang for their buck, including guest appearances by Stephen King (as Lincoln), Jon Stewart, Conan O'Brien, and Eric Bogosian, among others." (AudioFile)

There's a moment in this book where Sarah Vowell is being told about the history of the Dry Tortugas National Park by a park ranger with such infectious enthusiasm for his subject that Ms. Vowell relates that she felt giddy listening to him, as if visiting the Dry Tortugas was one of the very luckiest things that could happen to a girl. That's what listening to "Assassination Vacation" was like for me. The material is extremely interesting--this book covers the assassinations of Lincoln, Garfield, and McKinley, including related details about the strange sexual ideology of the Oneida community, John Wilkes Booth's brother's illustrious career as a Shakespearean actor, and Vowell's 3-year-old nephew's obsession with graveyards. More importantly, Vowell's enthusiasm for her subject conveyed by her Lisa Simpson-soprano is so infectious that I wanted to book a trip to the Dry Tortugas to see where John Wilkes Booth's doctor was imprisoned myself.

This is a really fun listen replete with gee-whiz factoids I can't stop relating to my friends. The connections between the three different assassinations discussed here are expecially fascinating.

Vowell's patriotism is also inspiring. The devotion to country that lead Ms. Vowell to complete this homage to fallen presidents gives "Assassination Vacation" a genuine sweetness completely different from the my-country-right-or-wrong saccharine so popular in today's political climate. Ms. Vowell's sort of patriotism--the kind that visits the Dry Tortugas to learn more about our nation's history, the kind that recognizes our country's failings rather than whitewashing them, the kind that loves America both for what it stands for and for what it really is--this is the kind of love for country we need more of, not the facile nationalism that confuses what is and what ought to be.

I can see how Sarah Vowell's voice may seem grating, but I suppose years of hearing her pieces on "This American Life" has conditioned me to expect greatness whenever I hear it.

This book isn't any different. It reminds me a great deal of some of those bits on "TAL" dealing with historic figures (Lafayette was a recent one). Her obsession with Presidential assassinations is cleverly portrayed in her well-crafted writing style, and her narration is dead-on.

Any complaints about Vowell's "Bush-bashing" should be taken very lightly. She takes a few jabs at our current President, but only to make a few points about the arrogance of assassins... people who deign to make the decision for the country on whether or not a given person is suitable to lead us. I think she raises a very valid point by bringing up Dubya.

A pleasure to listen to, thanks in no small part to Vowell's group of buddies lending narrative variety to our country's cast of characters. Particular kudos to Brad Bird for his funny-but-creepy readings of Charles Guiteau's gallows-poetry.

If only all history could be read (heard) in this format. Vowell has made an art out of putting history, places, and stories together into an entertaining thriller of a book. I was a history major in college but I never had any history delivered to me with such style and skill. She should continue to do more works just like this and we will all be wiser!

This is superb: funny, scholarly and fascinating. Ms. Vowell?s journey in the footsteps of presidential assassins is one of the best books I?ve downloaded from Audible.

History is a personal thing

An engrossing book! Sarah Vowell presents history in the same way that I often learn it. It's not linear, and it is linked to personal experiences. She took me on a journey -- with the Lincoln Memorial as an enduring place for our return. I hated to have to occasionally interrupt the journey!
She makes no pretense of being without bias. Her lens is personal. And isn't that the way it is with all of us?

This book was a lot of fun. Sarah Vowell's research, insights, and sense of humor make this a great book. One would probably either really enjoy or really hate her little-girl voice. I, for one, thought that it added to experience of the book. Her left-leaning political views will put some off, but most will enjoy the ride.

Couldn't get past the reader's voice!

It seems witty enough - the premise looked interesting - but I'm afraid if I want to experience this I'll have to go out and buy the hardcopy.

It's definitely my fault - I almost always listen to the previews before buying, but this one time I didn't preview it and just added it to my Next Listen.

The author/reader's voice is so grating that I can't continue. The "up-talking" at the end of sentences on top of the general tonality of her voice sent me over the edge after 15 minutes.

If you're picky about your readers please preview this first.

I happen to like Sarah's voice, but if you've never heard it, you need to listen to the sample, as some peole find it jarring.

This is less a comedy than a very well researched, thoughtful history of three assasins of presidents. I really enjoyed it, and it had some humor to it.

I wish I could do 4.5 starts, because I reserve 5 for the absolute best.

Both my husband and I listened to this book, as did our children when they were forced to in the car. Agreed, her delivery is a bit odd, and her voice takes a bit of getting used to, but I learned more US history (which says a lot, since that was my minor in university) from the 5 hours of this book than I learned in an entire university course. The depth of her knowledge on this topic is extensive, and her patriotism -- being defined as a true love for her country, not the flag-waving, blind devotion to AMERICA that the Right seems to define as the only "true" patriotism -- is undeniable. Her quirky humour kept me laughing, and the historical trivia kept me riveted through four or five straight days of commuting. I would recommend this to anyone who wants a different perspective on American history -- should be a hit with fans of Jon Stewart!

A little dated now but SO GOOD

This is one of my enduring favorites. Just a little (sorry, this is a lazy and overused word) quirky without being weird. Fascinating history and charming, friendly companions. Great guest spot narrators, and Vowell herself is engaging and wry, a perfect fit. Her political and social commentary seems so mild listening back to this early 00s work, even when she touches on her own family lineage and racial trauma. She describes a little of the real tragedy, upheaval, and suffering without getting either sappy or enraged, but she doesn't minimize the subjects' experience. I think relistening to this book has given me a glimmer of hope--one day, we will get to have a healthier perspective on 2020.

Interesting but nothing more

The yuthor takes an interesting take on American history, it is told quite humorously. I would have appreciated the book much more if it had been told by somebody else. The voice of the woman who is reading it, is a bit aggressive to my ears.