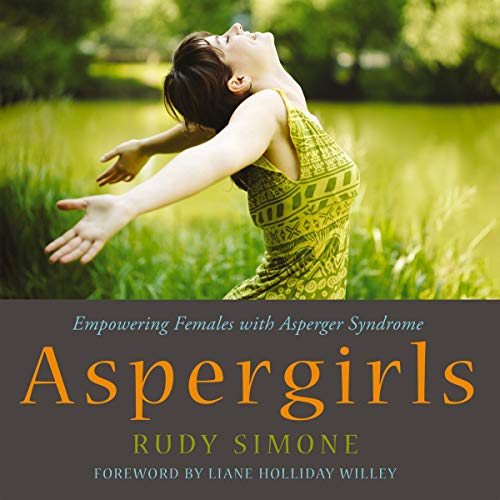 Award-winning handbook for girls and women on the autism spectrum, perceptive and wise reflections and advice .

Girls with Asperger's syndrome are less frequently diagnosed than boys, and even once symptoms have been recognised, help is often not readily available. The image of coping well presented by AS females of any age can often mask difficulties, deficits, challenges and loneliness.

This is a must-have handbook written by an Aspergirl for Aspergirls, young and old. Rudy Simone guides you through every aspect of both personal and professional life, from early recollections of blame, guilt and savant skills to friendships, romance and marriage. Employment, career, rituals and routines are also covered, along with depression, meltdowns and being misunderstood. Including the reflections of over 35 women diagnosed as on the spectrum, as well as some partners and parents, Rudy identifies recurring struggles and areas where Aspergirls need validation, information and advice.

As they recount their stories, anecdotes and wisdom, she highlights how differences between males and females on the spectrum are mostly a matter of perception, rejecting negative views of Aspergirls and empowering them to lead happy and fulfilled lives.

This book will be essential listening for females of any age diagnosed with AS and those who think they might be on the spectrum. It will also be of interest to partners and loved ones of Aspergirls and anybody interested either professionally or academically in Asperger's Syndrome.

I heard my own story on many of the pages of this book. I’m in the process of getting a diagnosis and this book gave many helpful hints.

The tone of the book is very kind. It really helps you accept your autism. The book also offers advice to aspergirls and to parents, which are clear and useful.