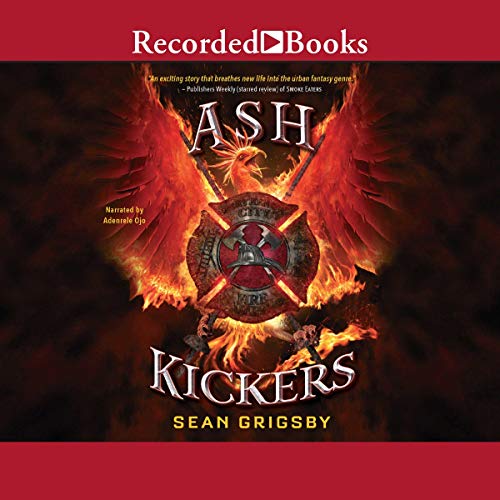 It's dragons vs. firemen vs. the Phoenix in the scorching fantasy sequel to Smoke Eaters.

With ex-firefighter Cole Brannigan in command of the Smoke Eaters, the dragon menace is under control. Thanks to non-lethal Canadian tech, the beasts are just tranquilized and locked up. But for Tamerica Williams, a job filled with action and danger has become routine. She's so bored she nearly gets her whole team killed, and Brannigan has to step in.

When a new threat emerges, the legendary bird of fire - the Phoenix - spreading fire like a plague and whipping dragons into a frenzy, it's a perfect task for Williams, but killing the Phoenix just brings it back stronger. Is that too much excitement, even for Williams?

After finding and finishing Smoke Eaters, I could hardly wait to get my hands on this book... And it doesn't disappoint! I love this book so much, it takes us on a whole new scorching adventure! Cole Brannigan, now the Commander, finds himself tied-down with paperwork, and he has to let his Smoke Eaters go out and fight the scalies! So now, meet Tamerica Williams, a woman trying to find her own place in life. A woman who's bored with the new capture and release method of fighting dragons and wants some excitement, umm... be careful what you wish for Tamerica, because what happens next will have you screaming! A Phoenix happens... and Smoke Eaters have no natural immunity! It turns out that a Phoenix is actually hotter than a dragon and, oh yeah, it can't be killed!
Adenrele Ojo was a perfect choice for narrating Ash Kickers. She steps into Tamerica's buttkicking shoes and kicks the nasty dragon-shit out of the way to get the job done!
So grab the book if you dare, and find out what happens next!