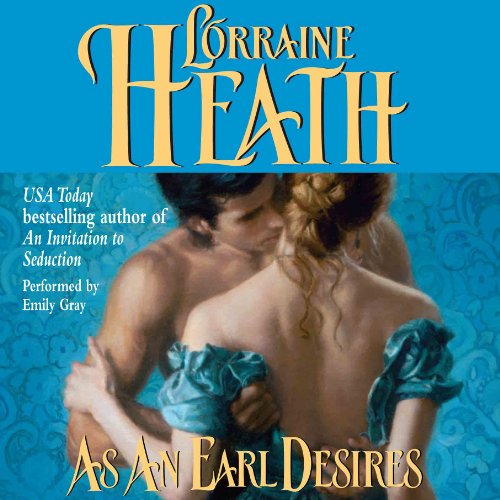 As an Earl Desires

Camilla Hutchenson, countess, sponsor, darling of the ton, has reached a staggering level of social power. But one man has managed to distract her attention from her schedule of charity endeavours and teas - and not just because he holds the deed to her estate.

The man in question, Archibald Warner, is the new Earl of Sachse. Though at first meeting he suspects his new ward of being nothing more than a social bit of fluff, the more time passes, the more he finds himself drawn to her. But there is something she is hiding from him, and she hesitates to show him her real heart, even though she wishes she could learn to trust him with it. For somehow she knows... if only she can give him the chance, he will teach her everything she could hope to learn about love.

LH DOES IT AGAIN - A HEARTWARMING HISTORICAL TALE

Firstly, this is book 1 of The Lost Lords trilogy - Book 2 A Matter of Temptation and book 3 Promise Me Forever done in 2005/6 so hopefully Audible will list them too.

Thoroughly enjoyable listen which focuses mainly on the hero/heroine and their feelings, histories, secrets, emotions and yearnings. Without me going into too much detail, Arch has just been made an Earl and enlists widowed Countess Camilla to educate him in the social do's and dont's of the ton. They try really really hard not to but guess what?.... yup they fall in love (and bed) - trouble is he needs a wife to carry on the lineage and she's barren and wants to marry a Duke (higher ranking than just an Earl) anyway.

Arch doesn't care about children and accepts their love but Camilla, despite everything, won't surrender and wants her Duke which has very touching consequences. This is a lovely emotional listen, with it's sexy sensual parts and written by a gifted author whose Historical Romances are always a guaranteed good listen. It has a surprising ending and not one you will expect.

Worth a credit? If you like an easy-going historical romance then this is your book and it is absolutely creditworthy.

Slow start... but patience can have its rewards...

I like the few Lorraine Heath books I've listened to. And got just what I expected. The beginning was very slow, so much so that I nearly moved to another book. I'm glad that I stuck with it. Even though I did shed a few heartfelt tears nearing the end. This story was not overly dramatic, and I do wish the epilogue itself had been more of the story, although' I know full well why it wasn't. I like the characters, they had their own challenges to deal with and were not fluffy airy idiots like some HR characters.

All in all a good, if not exceptional, listen. Creditworthy? I have to give it an even toned "sure...", if this kind of HR is your thing then why not.

I did like the performance of the narrator, her voices were warm and distinguishable, with few moments of confusing blending individuals. There was no compromise of a female voice reaching to do male voices or (my VERY least favorite) a male voice making a mockery of female voices. I liked her male tones, Arch oozed the warm personality he was supposed to have and for that I give her five stars!

As an Earl Desires by Lorraine Heath is definitely moving up to the top of my list as one of my favorites! I would definitely recommend this is credit worthy! Enjoy!

I think this was the worst book from this author. The narrator was HORRIBLE. A waste of a credit.

This recording is very strange. There are several areas where the sound stops. I kept having to pick up my device to be sure I hadn’t accidentally hit the pause button. In a few instances, it seems like information is missing. There is not a sensical transition to the next thing you hear.
Aside from the weird recording glitches, I did not love Emily Gray as a narrator. He reading didn’t give the recordings the emotion needed to make the story come to life.

I feel guilty about the price I paid for this audio book. It was not a bargain but a really really good buy. It’s been a long time since I’ve read a romance with a mature H/h. I buy all of LH books, Emily Gray was a good narrator but I love Susan Ericken so much better.

Discovery of a great narrator, improved the book

Would you consider the audio edition of As an Earl Desires to be better than the print version?

I only have the audio

Some of the content was repeated. Passages where the h/h review their unworthyness.

Which character – as performed by Emily Gray – was your favorite?

Both the hero and heroine. She sounds like one of my favourite narrators, Carolyn Morris. I went to the site to look for more books where she is the narrator

Yes, when the heroine reads her first sentence. I was a literacy tutor and this wasa very real moment in the novel. The subject of adult learning was touching.

I really loved this narrator. I have read a lot of LH novels, but this one was my favorite. Not sure if it was the story or great narration.

The narrator did a good job.