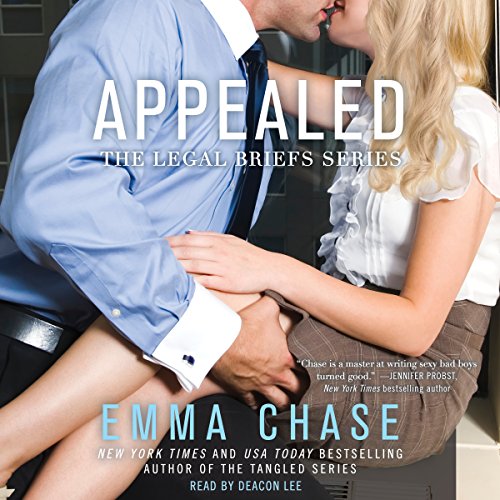 The New York Times best-selling author of the Tangled books returns with the third romance in the Legal Briefs series, a collection of sexy novels about first crushes, second chances, and the final verdict of the heart.

When Brent Mason looks at Kennedy Randolph, he doesn't see the awkward, sweet girl who grew up next door. He sees a self-assured, stunning woman...who wants to crush the most intimate - and prized - parts of his anatomy beneath the heels of her Louboutins.

When Kennedy looks at Brent, all she sees is the selfish, Abercrombie & Fitch catalogue-worthy teenager who humiliated her in high school in order to join the popular crowd. A crowd that made those years a living hell for her.

But she's not a lovesick social outcast anymore - she's a Washington, DC, prosecutor with a long winning streak. Brent is the opposing attorney in her next case, and Kennedy thinks it's time to put him through a little hell of his own.

But things aren't exactly working out the way she planned. Brent has his sights set on Kennedy, and every fiery exchange only makes him want her more - and makes her wonder if he's as passionate in the bedroom as he is in the courtroom. In the end they may just find themselves in love...or in contempt of court.

It's a sad day when a storyline with great potential is railroaded by sub-par narration. Honestly, I am officially not a fan of Deacon Lee. Unfortunately, this may be the fourth or fifth book I've listened to with him as the narrator. I'm sure in another story, with a non-romantic themed storyline, he's fantastic, but, not this genre, not this book.

The Legal Briefs series has been stellar up to this one. APPEALED was good, it was, but, really, the narration stole the show, and not in a good way. The best part of the story was the epilogue, which pulled everything together in one of the best HEA's I've heard in awhile. I still love Emma Chase, and would purchase other books by this author, but sadly, this one was just ok.

Deacon Lee is NOT Alpha Male

Would you listen to Appealed again? Why?

I liked it better the 1st time I listened to it. However, the second time all I heard was the snarky tremble of Deacon Lee's voice. I LOVE LOVE LOVE Emma Chase. I have all her Audio books and have listened to them all several times. I like that this is 1st person in the males perspective - Has the usual dry humor with laugh out loud moments. The characters are well developed. There is some "trip down memory lane" moments but they are done in a way that doesn't leave the listener confused. No insta-love and this is a stand alone story. It's an Emma Chase story what's not to love... Except the narrator :(

If you’ve listened to books by Emma Chase before, how does this one compare?

Tangled is still my favorite. In this series probably Sustained. This is more a 2nd chance romance.

Would you be willing to try another one of Deacon Lee’s performances?

NO...just no. He has so many voices and his female voice is actually less distracting then his normal narrative voice when he's not in character. When he portrays other male characters it's less shaky.. But when he's narrating the H...his voice is just whiney

Emma Chase writes sexy and funny no doubt about that.Emma's books are my go to when I really want something steamy and entertaining to listen to but since I'm a Yorkie i was scepticle about listening to someone else besides Sebastian York. well move aside Mr. York because it looks like i need a little room up here for my Mr. Lee. This was the first time I heard the delicious voice that is Deacon Lee. This is the start of a beautiful relationship between me and any audio books narrated by Deacon! I was hooked right from the beginning and loved the court scenes. OBJECTION!

Emma Chase is the BEST!!!! Her writing never disappoints! Appealed has a wonderful story, smart, sexy=Smexy!

I've stopped downloading my fave author's books if Deacon Lee narrates. I can't get that romantic feeling about a book read by someone who sounds like the late-great comedian Paul Lynde. EMMA CHASE, I love your books, hated this narrator! :-(

A Book with Sex Appeal!

This book was delightful. Funny, sexy, romantic and sweet. I do like stories that have a bit more naughty time but this book does such a great job of balancing naughty and sweet I didn't even really miss it. Strong female lead character and great narration. I'm a huge Sebastian York fan and have yet to find another male voice that I enjoy but Deacon comes pretty close. I was skeptical at first listen but fell further in like with his voice the more time went on. I'd give this book a listen if you are looking for something light and 'romantical' with just a hint of naughty!

Would you try another book from Emma Chase and/or Deacon Lee?

I love Emma Chase and this series has been hands down one of my favorites. I was very excited for Appealed to come out. I thought it was pretty good - but my least favorite of the series. I didn't think Brent was as strong of an alpha character as Stanton and Jake and there wasn't as much tension. I love all of Emma's work and would readily buy another one.

Would you recommend Appealed to your friends? Why or why not?

I don't understand why they keep casting Deacon Lee as the strong romantic male lead. His voice has the snarkiness and wry inflection of the comedic sidekick. There is nothing sexy about his performance. I am seriously confused by people who think he was the right choice for this. He is a good narrator but not for this genre.

You will fall in love with this couple. Great story and love the epilogues! One of Emma Chase' s best!!!

Appealed? Should be repealed for immaturity

Plot 1 makes you roll your eyes. Could a case honestly end like that? Plot 2 is unbelievable. The characters behave like 16 year olds at best and 12 year olds at worst. Is this really the way 2 extremely well-educated and professional people behave? That two smart people can't get over typical high school drama is lame. Also, the narrator isn't bad it's just his voice doesn't match the persona. His shaky, cracking voice is better suited for a YA hero or a loveable nerd. He did a good job but not the voice of a rich, arrogant, cocky lawyer. I'm disappointed with this last installment in the series.

Favorite in the series

I absolutely love Emma Chase!! Her writing is so fresh & fun. Appealed had me laughing so hard I had tears. Kennedy's struggle with self esteem was something I think all girls can relate to and to see her be a success was a awesome message.
Thank you Emma! Keep writing and I will keep reading. :-)

Total home run from Emma Chase. So sad this was the end of the series because I enjoyed every minute of every book. I laughed out loud and fell in love so many times during this series. All these characters stole my heart.