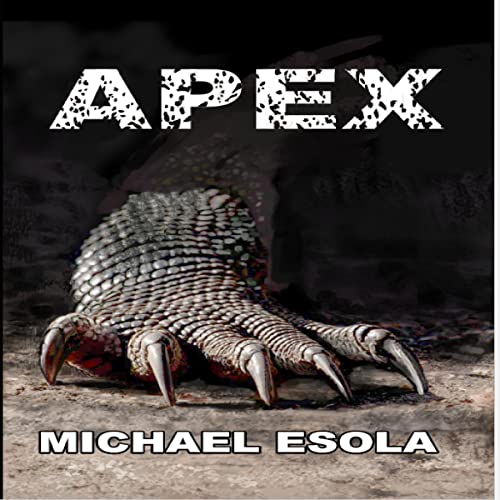 Two young and determined entrepreneurs set out to create an annual convention called Prehistoric Con. What was supposed to a glorious evening in celebration of all things prehistoric - showcasing best-selling authors, movie directors, executive producers, screenwriters, and a host of others from the industry - takes a sudden turn for the worst with the reality that they have been locked inside the building with no way out. It isn’t long before the entire convention comes to the horrifying realization that they are being hunted, and that from the dark places within the building, things are starting to stir to life.

Interesting story using modern day Komodo dragons for dinosaurs, but drags on far too long. Also narrator makes no effort to differentiate between characters, so trying to follow story is very hard.

A mini Jurassic Park... too mini

Are you afraid of komodo dragons? No? Well, what if we made them BIGGER? No, not that big. Little smaller. Eh, roughly twice the size of a notmal komodo dragon? Still, no? Well what if you have an entire convention worth of random people at your side? That actually makes it less scary?

Yeeeeah, to say this book doesn't work for me would be an understatement. Don't get me wrong, komodo dragons can be scary, but this book kind of just assumes you're afraid of them and goes from there, but the lackluster monsters aren't the only things that fall flat.

The characters, where do I even begin with these... people. I have read books with protagonists who are wizards, aliens, dragons, robots, even actual dinosaurs, and SOMEHOW this book has the least relatable characters I've ever experienced. A silicon valley something-or-other investor who is also a mentally unstable steroid-addicted bodybuilder and is obsessed with extinct komodo dragons? A Taiwanese professional basketball player who stops playing basketball (for some reason) and then becomes a school teacher and part time bouncer, but dreams of... opening a business publishing amateur sci-fi novels? Do these sound like real people to you? The only character who feels like an actual human is the published author character, who by his actions, we're clearly supposed to hate. A grounded setting like this needs grounded characters, not college soccer players who make improvised flamethrowers and dream of opening food trucks.

That's another thing, every single character in this book (which has an entire menagerie of characters) with only a few exceptions is an athlete of some kind. Its like the only way our author knows to convey a character is strong is to state outright that they play some kind of sport. The second you notice it, which you will, it will not stop bothering you.

It also kind of drags on. We don't need to know where every main character is at all times, you can have them sum up what happened when they rejoin the group, its fine.

It's a shame, really, because with some editing and relatively minor rewrites I think this could've worked, and I definitely wouldn't be opposed to seeing future works from this author.

As for the narration, its fine. Just fine. His delivery is clear and most of the characters have distinct voices to differentiate them, which is impressive considering their number, and overall I like his voice, but his delivery is on the monotone side, which makes listening for extended periods of time difficult.

I feel like there should be some kind of summary here, but this a book review, not a college essay.