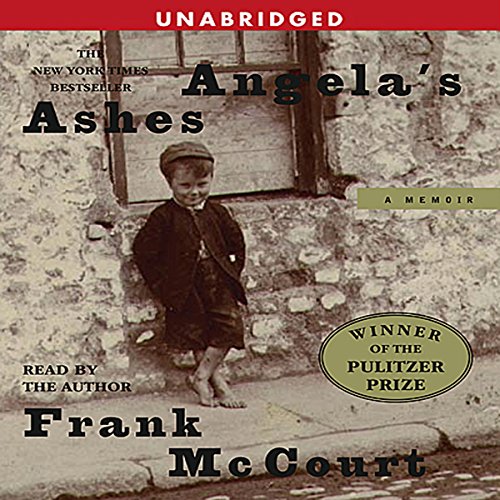 Frank McCourt's Pulitzer Prize-winning memoir, movingly read in his own voice, bears all the marks of a classic. Born in Depression-era Brooklyn to Irish immigrant parents, Frank was later raised in the slums of Limerick, Ireland. His mother, Angela, had no money to feed her children since Frank's father, Malachy, rarely worked, and when he did, he drank his wages. Angela's Ashes is the story of how Frank endured - wearing shoes repaired with tires, begging for a pig's head for Christmas dinner, and searching the pubs for his father - a tale he relates with eloquence, exuberance, and remarkable forgiveness.

Listen to Frank McCourt talk about this book on C-SPAN's Booknotes (7/11/97).

"Frank McCourt is a marvelous writer whose words are made all the better when he reads them aloud..." ( Bookpage)
"...one of the best I've heard in years." ( The Boston Globe)
"...so good it deserves a sequel" ( The New York Times)

"Here we have the stereotypical Irish characters - the drunken poet father; the all-suffering mother; the miserable, hungry kids being turned away by a haughty Church - all made three-dimensional and brought fully to life by both McCourt's language and his loving, intimate narration.... Grim it is - but the tale and its teller transcend the poverty - and so does the listener, who glories in the story and voice from beginning to end." ( AudioFile)

A classic book *and* a classic audiobook

Sometimes the audio version of a good book can be ruined by a bad reader (too much Broadway or something). And sometimes a good reader can cause a book that's boring on paper to come alive in the audio version. But it's a rare and wonderful combination when a top-notch book is brought to life in a top-notch way by its own author in the audio version, especially if it's a memoir. This is an example of that blessed phenomenon. Some people find Angela's Ashes to be depressing, but I find it to be just the opposite. McCourt's attitude is inspiring. He got through his terrible childhood, and triumphed. The pathos is generously tempered with humor. I love this book, and I love to listen to McCourt himself read it to me.

I hesitated on getting this book. All I had envisioned about this story, including the picture on the book cover, told me it would be a sad, dark, and depressing tale. But nothing could be further from the truth.

Ethnic tales have always captivated me, but they were usually stories from MY ehtnic background. I am not irish and this tale still cpativated me. The child's perspective was so true ...like not understanding what it meant to die for one's country. And the author was able to bring this out in his own voice so well.

Many literary masterpieces leave me cold. But not this one. I truly understand why the Pulitzer was awarded. Nothing was sugar coated. There were awful things that happened, yet the hope came out. Whether his parents were stupid, or loosers, or just plain ignorant ...they were his parents and he loved them. And they loved him. We should all be so lucky.

I absolutely loved this book. Be patient at the beginning, as the book is read by an old man from a child's perspective. Once you get used to this, it is a joy. I cried and laughed. Frank's accent makes this book absolutely priceless in audio format. Though I wasn't raised in poverty or with an alcoholic father, I was struck by how much I related to Frank's childhood experiences. His treatment of sex, religion, and the general anxieties that accompany adolescence really hit home with me. This has been one of my favorite books on Audible. Don't forget to get the sequel, 'Tis, as it is also excellent.

Best audiobook of all time

I'm supposing that most book lovers have already come across Angela's Ashes by this time -- so many prizes, so many awards, so much well-deserved international acclaim. I read the book when it first came out, loved it so much I then bought the audiotapes -- on cassette -- and listened to them several times over. One time, I remember listening on the long drive from Sacramento to Southern California, and I recall driving into urban Los Angeles crying so hard I could hardly see the road. It's that kind of book -- one that will have you both laughing and crying within the same minute. It's just priceless.

Somewhere along the way the cassettes got lost, so when I saw the book again on Audible, I was delighted. I haven't listened to it for maybe ten years, so it was new to me all over again. One of the delights of this book is seeing yourself reflected in what McCourt writes. My background is about as radically different from his as is possible to to be, for two English-speakers, anyway, but still, there are parts that resonate personally with me so much. When he's talking about his school days, there are time when I feel myself saying, "I remember that!" although of course I don't. Not exactly. But McCourt's book is like that -- it draws you in, and makes his story resonate in your own mind.

Author-read books are always the best, and in this case, McCourt is exceptional. No one can tell his own stories like he can, and you feel you're in the same room with him, listening as he tells you what it was like.

If you haven't read or listened to Angela's Ashes in a while, it's time to do it again. And if you've never come across it before, wow -- are you lucky! To listen to this book for the first time is really a wonderful thing.

Thank you for writing, and even more for reading

I have been listening to the book for 10 hours now and still I've got a smile on my face and the tears in my eyes. I gained so much respect for Frank Mccourt. How can a man "walk" back through his "miserable Irish Catholic childhood", (The happy childhood is hardly worthwhile) and be there as if it was yesterday and take YOU there and meet the characters around him as if you could shake their hands - with his Irish accent, simple illustrative words (buckety pram, wee children) respectful impersonations and his sweet warm voice - and make you see that every second of life IS worthwhile.

And for the ones who think the book is depressing: Go and stand beside Francis look through his eyes, he'll make you see. Who said it's easy?

I thouroughly enjoyed Mr. McCourt's reading of the remarkable store of his chilhood. His repeated descriptions of his emotions when telling about events he remembers from his childhood make the stories come alive. The reading also brought back memories from my own childhood and the emotions I felt at the time those events were happening. I look forward to hearing more from Mr. McCourt.

When I described this book to a friend of mine, she said "Eeeew, sounds depressing." But it wasn't depressing, because of the hope the children and their parents had of a better day, and the love they had for each other despite their many flaws. McCourt is straightforward and honest about his family, showing his father to be loving and attentive, but with an alcohol addiction that is devastating to his family. The author paints accurate portraits of the characters, including himself, and the result is a book rich with humanity, frustration, hope, and humor. To hear it in his own voice is a treat. It's one of those books I almost wish I hadn't read, since I'll never again be able to experience it for the first time. But I'll listen to it again several times, and I suspect I'll find new and interesting things I missed in my original listening. I've recommended it to nearly everyone I know, and I'm surprised I haven't yet been asked to find something else to talk about.

The draw of this book has everything to do with the writer's incredible talent for colorful and moving story telling, and a writing style that comes alive with McCourt's uncomplicated and free flowing Irish accented narration. Frank McCourt's amazing life story is a not just a must-read, but a Classic.

MOST WORTHY OF IT'S PULITZER!!!

I was immediately captivated by Mr. McCort's wonderful speaking voice, which completely drew me into the narrative of his childhood. The subtle humor of this man sprinkled over the adventures and tragedies of his childhood brought laughter and tears, and a vivid comprehension a life beginning in such abject poverty. I recommend this book to anyone who appreciates a historic reality lesson, or has ever or never known love or despair or poverty. Frank McCort is living proof that there is hope for us all!!
Mr. McCort is a marvelous writer and story-teller, and I intend to read every word he has ever written.

My take on Angela's Ashes

I don't think this story could have been told better by anyone than this fabulous, funny, sensitive, tell it like it is, writer - the second I finished it I wanted more, and got it with 'Tis..I'm in the middle of 'Tis and can't put it down either!! Is Angela's Ashes one of the most engrossing books ever??? 'Tis....

Frank McCourt tells the story of his childhood and him growing up in such an empathetic and incredible way. Even though as a listener you understand the absolute misery which he had to endure, he reads it in a contempt and sometimes even humorous manner. There is hardly any sign in his voice indicating himself being emotionally attached in a negative way to what he is reading. He does not give you the impression of trying to lament. By listening to this book you not only acquire a lot of interesting Irish and political history of the early 19th century, but it also makes you contemplate and re-think the position in which most of us are in today - compared to the rough times of Frank McCourt's childhood. Therefore a &quot;must-listen&quot; or &quot;must-read&quot;!!

I love the way Frank McCourt tells the story of his childhood. I over his Irish accent and the innocence and openness with which he tells his story often bringing tears to my eyes but also making me chuckle at some of the funnier parts. Beautiful, heartbreaking, sad and wonderful all at the same time.

without self pity Frank describes his dirt poor life and makes you weep and laugh. How the little boy's thoughts bring to light the ignorance of the adults is incredible

This book moves you

A stunning story of poverty and ignorance read superbly by the author. This story moved me like few before.