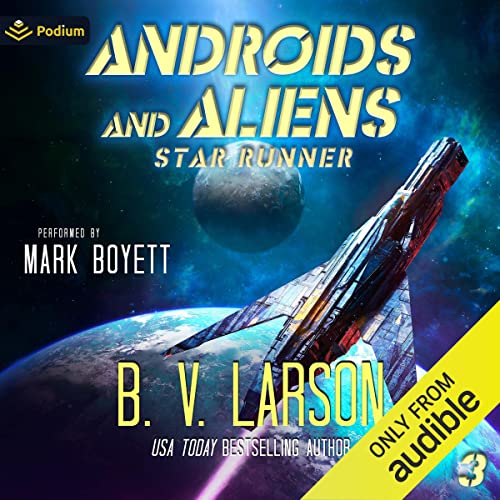 It’s time for the humans to strike back!

Vile, ant-like aliens have already consumed the colonies of the Faustian Chain. Known as the Skaintz, these creatures destroy all living things and carry them back to their nests to be devoured. Now, they’ve begun to invade the stars of the Conclave.

Captain Bill Gorman, a smuggler from the Fringe, is called upon by the Conclave rulers to scout the enemy. Fleets and armies are launched in a desperate attempt to annihilate the Skaintz before they consume humanity.

Find out what happens next in Androids and Aliens, the thrilling third episode of the Star Runner series.

Easy to get hooked on this story. Good clean humor for the whole family. Highly recommend

This book was okay. BV Larson has written many fun and enjoyable sci-fi books. This one wasn’t horrible, but not up to his standards. It was if he mailed it in. Just this listener’s opinion. As usual. Mark Boyett is among the best. It’s hard to listen to anything he or RC Bray read and be disappointed. I suspect without him, this might have been painful.

I really think this series is well thought out. I also think even if the first wasn’t your favorite, this one may be worth having a listen. I think it developed the story a lot farther.

I venture to read as many BV Larson books as are available. This book was the conclusion to a great story. Not as strong a narrative as I'm used to but still worth the read.

I'd like to say I'm sorry I bought this book on Amazon. I really wish Audible actually paid it's author's in real currency not just in pennies.

Hopefully I can realize a venue for audiobooks in the near future where I feel my money is actually going to the correct individuals.

This venue feels too much like taxes from the Fed!!!😭

Cant wait for the next book! Fun sci-fi book and excellent plot and characters!

Worst book of the series.

Larson’s books are becoming increasingly tedious and boring. He repeats himself endlessly. Tells us something in great detail in one chapter then repeats it to us again like we’ve never heard it before in the next chapter. The dialogue is childish and moronic. I found myself skipping entire chapters just to get past the idiotic dialogue. I’m worried that he’s losing his mental faculties. The story just meanders aimlessly. You could sum it all up in two sentences. I can’t wait for it to end.

A steady ramp down

I read these 3 (at the point of this review) novels back to back. As I went along, I became increasingly less interested. I enjoy B.V. Larson but this series is not for me. I like LONG audiobooks, but not when one can get distracted, come back to paying attention 5 minutes later, and find that the flow of the story has not changed significantly. "He's STILL in the process of doing that? He's STILL there?" By book 3 that was happening much more then I would like. The "Mouth" Alien Queen seemed to slobber on for hours. I didn't develop any real attachment to any of the collection of female love interests in this series. I will sick to Larson's other work because I don't care for this series enough to read another installment.

Is this the end? Sure seems like it. Nice little bow put on in the last chapter.

Story was thin and not very interesting. Definitely not as good the first 2 books. Love the author and the narrator but I expect more from an author that I love.

An instant adventure, fast paced and fun! This narration was great. I unfortunately didn’t stop listening to it till it’s finish. I work 12 hours a day and I enjoyed it all day and finished it the same day. Totally worth it!