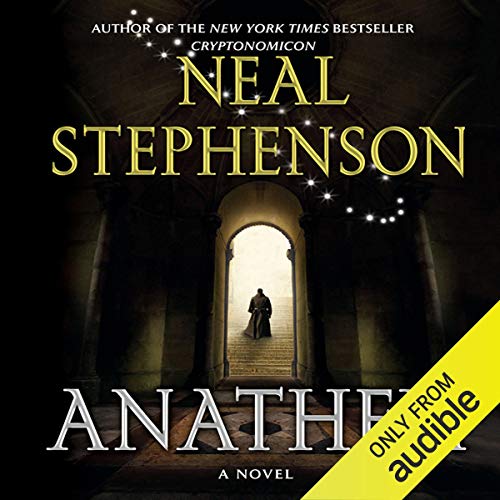 Fraa Erasmus is a young avout living in the Concent of Saunt Edhar, a sanctuary for mathematicians, scientists, and philosophers, protected from the corrupting influences of the "Saecular" world by ancient stone, honored traditions, and complex rituals.

Over the centuries, cities, and governments have risen and fallen beyond the concent's walls. Three times during history's darkest epochs, bloody violence born of superstition and ignorance has invaded and devastated the cloistered mathic community. Yet always the avout have managed to adapt in the wake of catastrophe, becoming out of necessity more austere and less dependent on technology and material things. Erasmus, however, has no fear of the outside - the Extramuros - for the last of the terrible times was long, long ago.

Now, in celebration of the week-long, once-in-a-decade rite of Apert, the fras and suurs prepare to venture outside the concent's gates - opening them wide at the same time to welcome the curious "extras" in.

During his first Apert as a fra, Erasmus eagerly anticipates reconnecting with the landmarks and family he hasn't seen since he was "collected". But before the week is out, both the existence he abandoned and the one he embraced will stand poised on the perilous brink of cataclysmic change.

Powerful unforeseen forces threaten the peaceful stability of mathic life and the established ennui of the Extramuros - a threat that only an unsteady alliance of Saecular and avout can oppose - as, one by one, Raz's colleagues, teachers, and friends are all called forth from the safety of the concent in hopes of warding off global disaster.

Suddenly burdened with a worlds-shattering responsibility, Erasmus finds himself a major player in a drama that will determine the future of everything - as he sets out on an extraordinary odyssey that will carry him to the most dangerous, inhospitable corners of an unfamiliar planet...and far beyond.

I think I'm about 45 minutes into the book. The narration so far has consisted almost entirely of fetishistically detailed descriptions of labyrinthine architecture, occasionally interspersed by technobabble that is mostly composed of made-up words and is mostly incomprehensible. There are also occasional excerpts from a fantasy dictionary, read by a different guy who has no business recording anything. I assume that some sort of plot develops at some point but don't think I can force myself to stick it out that long.

I love Neal Stephenson... Snow Crash, Necronomicron, Diamond Age, The Fall, Reamde, etc...
But getting through the first hour of this thing was a labor of love...and like pulling teeth.
The completely ridiculous "other earth" lexicon slathered all over the entry text...?
The *constant* descriptive extrapolations in every dang sentence (see above: weaving in of intentionally 'obscure' world refs... But oh wait!! Lol, there's literally an intro that tries to insult you into overlooking that -- "if you don't like to figure things out for yourself, let me explain all the terms and the world they are extracted from... it's not Earth..." yada yada yada.

Seriously.. there's an into saying that.
Wtf Neal, seriously.

Yes, but with reservations. I had already read Anathem in paperback form years ago and wanted to revisit it as a performance. The audiobook is well done, but it is a very, very complicated book (Stephenson basically invents his own language, along with 7,000 years of fictional history). The physical book itself has a dictionary for reference, and a clear timeline of the world's history, which are invaluable resources while making sense of everything. The audiobook makes it more difficult in that regard.

What was one of the most memorable moments of Anathem?

I don't want to spoil anything, so I'll just say: the dialog.

This book literally changed my ideas about the nature of consciousness and cosmology.

This is one of the best speculative fiction novels ever written. The only real choice you have is whether you want the audiobook or the paperback. Or both. I own both and I don't regret either purchase.

Pretentious failure to bring on the intended state imho

This book has no serious issues. It is well written, nicely narated albeit a bit to slow gor my taste. However it is not your usual epic sci-fi story with lots of tech and or otherworldly species. It tries to bring on the “feel” of a different type of civilization by twisting words and their meaning enough to be different but not as is required to be familiar, thus creating an effect of “differenceness”. Additionally it mixes various dialectics which apparently in that world caused earth shattering conflicts and shaped civizations. The problem with this, is that these specific dialectics do not carry such power, for even the casual reader of true philosophy, This brings me to the last thing about this book: It tries to present a number of worldviews and systems of thought and philosophies in a very naive and shallow way. If I wanted to learn philosophy I ‘d read Aristotle and Kant and if I wanted a basic science instruction I’d pick up a science book, if I wanted to etymologize and do wordplay, I’d get a book on those things. I wanted sci-fi and so I picked this up, but the “dose” was not strong enough it had all those other things in there. In the end I do not think that presenting a mosaic of philosophy using slightly twisted words and imaginary dialectics brings on the intended state. Instead I was left wondering if the author was simply trying to present us with a display of how many words he knows well enough to manipulate and how many philosophical concepts he can encompass into a narration. In the end, the means of this work has obliterated the goal.

Are the high ratings a viral prank?!

Gave this a good effort, but found it impenetrable - at least in audio. The worst part was the language creation/use and being lost for a reasonably large percentage of many sentences. Might have been different if being read, but I'm not going to give this any more time. Indeed, it felt soooooo good when I quit. Thank You Audible for accepting the return.

The high ratings are baffling. At one point I thought those must be some kind of viral prank/hoax - perhaps intending to lure others in as a joke!

Sometimes a great narrator can save a story- not here, since narration is flat, at best, and with hard-to-describe annoying inflections driving the last nail into this literary coffin.

A literary Masterpiece with an Amazing production!

This one is a book for intellectuals with flexible minds. It is so intimate with the reader it tingles. I drew an additional portion of fun having read other Stephenson’s books before. This way, you — dear reader — will have more insight and deeper connection with the genius author.

I’ve got over 200 audiobooks and this is one of 3 that I never finished... until now, years later. The story and narration was so bland and hard to get into via the audio format. So, I borrowed a paper copy from a friend after he praised it (and reviews were good) and followed along the audio reading with reading the pages.. and finally the book took on a clarity that was lacking with only audio.. some of the concepts of the book just came out cleaner with visual aid of the words... so enough of that; Excellent book, great world... some vagueness and a rushed ending it seemed a whole additional book could be written of equal length to summarize the outcome of the convex and ————- of Saint Orolo. Maybe 700 years later ;-).
-Good like writing a sequel Neal!!

A little lengthy but really gets moving at the end

I enjoyed this book quite a bit. It is, however, quite lengthy. I found myself irritated at the speed (or lack thereof) at which things moved sometimes but it is worth it.

Might be good in a movie, but I did not enjoy how slow moving it was.

Could not stop until the end

A very imaginative description of the truth. Well written and narrated. Perfect balance of logistic science and spirituality.

Anathem has become my new favorite book through this experience. Neal Stephenson manages to create a foreign but utterly believable world with a rich history and many many parallels to our own. A big part of the fun is to figure out which of Neal's neologisms represents which of our real world objects, thoughts, theorems or persons.

As a student of mathematics, what especially stands out to me is the incredible detail with which Stephenson dares approach topics and subjects that any other author would shy away from so as to not bore away his readership. Stephenson respects the reader (listener) enough to unabashedly thrust into metaphysical, mathematical and scientific discussions, called Dialogs in universe, and fill entire pages with them. Discussions range from quantum physics and the nature of consciousness to mathematical theorems and their implications and the metaphysical examination of this universe's equivalent of Plato's theory of forms.

All of these examinations are underpinned and intertwined by a very solid first contact narrative that yanks our protegonist out of his comfort zone and shoves him headfirst into an adventure in which his wit and the intellect of his peers are the driving force.

A solid 5/5 for this book which I consider to be a masterpiece of our time.

The beginning of the book is a bit slow and hard to follow but after that initial slow burn (book 1) it is just wonderful. the story kept me interested right to the end where my only complaint is that I then had to leave this world.

This story is not for the intellectually faint-hearted in the sense that it demands one’s concentration. You can’t expect to follow the storyline if you’re, for instance, trying to listen to it while parallely following up on a hobby.

But it’s absolutely worth the dedication. The storyline is consistent, a wholesome experience particularly for those interested in math, engineering, and science, and it is both thought-provoking and intriguing, not only by means of the story itself, but also due to the very well-phrased English.

To say that Neil Stephenson has a knack for writing would be saying that Johann Sebastian Bach knew a bit of music. Highest recommendation!

How have I never heard of this book before?

This may just have become my favorite Sci Fi book. So intelligent and inspired. Great stuff

Why do i have to write a review text here if it says it is optional?