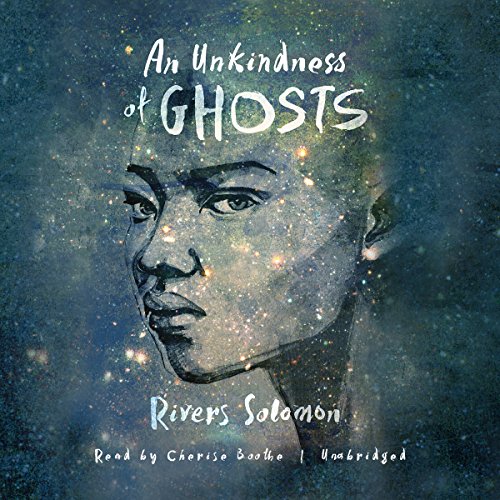 An Unkindness of Ghosts

An Unkindness of Ghosts

Odd-mannered, obsessive, withdrawn, Aster has little to offer folks in the way of rebuttal when they call her ogre and freak. She's used to the names; she only wishes there was more truth to them. If she were truly a monster, as they accuse, she'd be powerful enough to tear down the walls around her until nothing remained of her world, save for stories told around the cookfire.

Aster lives in the low-deck slums of the HSS Matilda, a space vessel organized much like the antebellum South. For generations the Matilda has ferried the last of humanity to a mythical Promised Land. On its way the ship's leaders have imposed harsh moral restrictions and deep indignities on dark-skinned sharecroppers like Aster, whom they consider to be less than human.

When the autopsy of Matilda's sovereign reveals a surprising link between his death and her mother's suicide some quarter century before, Aster retraces her mother's footsteps. Embroiled in a grudge with a brutal overseer and sowing the seeds of civil war, Aster learns there may be a way off the ship if she's willing to fight for it.

This novel is about a renegade scientist, Aster, living on the bottom of a generation ship's a social hierarchy due to her skin color and the deck she was born on. Low deckers are subject to work shifts in the fields nourished by Matilda's internal sun Baby. Their proximity to the Baby sun's radiation affects their health etc. The protagonist and the nation she belongs to are medically intersex. However, this is not meditation on a society of true hermaphrodites a la Sturgeon or LeGuin.

Aster and her traumatized friends set out to work out the secret code left in Aster's mother's notebooks that may show the way for Matilda to end its 300 year (ship time) sojourn through the stars.

The story provides a good balance of character, plot and world-building. Aster is toward the end of the autism spectrum that used to be classified as Asbergers. She's brilliant but also has to systematically parse what her interlocutors are saying to understand them. Aster's ASD is a good window for the novel to resonate on the meanings of words and drop lots of medical terminology without losing its flow.

The story is a classic 'chamber opera.' All the action takes place in the environs of Matilda.Solomon adds an Afrofuturist flair peppering the story with lower deck fables that have a West African flavor to them. The novel has an episodic feel throughout but ties up nicely.

Recommended to lovers of folk tales and intricate worlds. Fanatical and casual SF fans alike will enjoy this one..

Love the concept BUT

I absolutely love the concept of this book. An entire society of people who for generations have been traveling on a space ship to find a new planet to call home after leaving earth. I love the questions posed to gender identity and sexuality. The class systems between the different levels of the ship. Though i absolutely loved the concepts and ideas presented i had problems with the storyline and the character development. I was really hoping to learn more about the history of how they had ended up on the ship(what happened on earth, where were they going?) but i suppose the idea is that they themselves don’t even know anymore. I also felt that the story was rushed from one event to the next with no context, at times i felt that i had skipped a few chapters or missed something because all of a sudden things had progressed so quickly without any explanation. I also found it incredibly difficult to feel anything for the characters because the character development was totally lacking and the main characters were so cold and mechanical.

With an audio book in particular, I want to listen to something with a complex plot and characters. But this was a little too complex for me, and I often found myself confused. When reading on the page, if you drift off and realize you’ve missed something important, you can easily go back and reread. It’s far more difficult on audio. So probably some of my confusion came from not listening with 100 percent of my attention, which this book definitely requires.

Lots of lot of brutality--well, the premise is the &quot;brown people&quot; live on the lower decks of this ship that's been in space 400 years and they're pretty much slaves. When reading an actual book, you can skim if you have difficulty with graphic violence, sexual or otherwise. Again, hard to skip on audio. All you can do is fast forward and possibly miss something pertinent within the scene you don’t want to listen too. At this point in my life, I can’t stomach much violence and can stomach zero sexual violence. This had a lot of both.

I imagine many will find this a 4 or 5 star listen/read. It’s certainly ambitious and original. And if you're looking for something with diversity of all kinds, this will fit the bill.

This story is unlike anything I've read. Written from the perspective of a black, autistic, intersex woman in the style of dystopian afrofuturism it explores difficult themes like neoslavery, class, gender, abortion, and human rights through the lens of a mystery. Hard to describe but you won't be disappointed. The narration is particularly on point with incredible talent in accents.

I didn't want it to end

At first I wasn't sure if I cared for the narrator's voice, but she immediately grew on me once the character dialogue kicked in. This book is incredibly creative, and anyone with a particularly analytical thought process or who is close to someone with a highly analytical thought process will immediately recognize Aster as a kindred spirit. Aster is neurodiverse, stubborn, and inquisitive. She is surrounded by imperfect, fascinating people. An Unkindness of Ghosts poses familiar themes in an unfamiliar, dystopian setting. What sets this book apart from other apocalyptic dystopian space novels is the loving attention to detail that creates the world of the ship Matilda. River Solomon deftly balances extensive world building with character and plot, to create a believable and engrossing future scenario which contains many similarities to the past and present of America and the Carribean.

Like much sci fi does, this book encloses very human issues and emotions in a limited space where they're brought to their extremes. Race, gender and hierarchy involving domination are heavily featured at the core. It's beautiful and brutal.

As an autistic person (with an autistic spouse) I also find its portrayal of autism excellent. Not quite the same autism as I have, but close in some ways, and autistic people are as different from each other as anyone else, of course.

The narrator told the story well, and made each character distinct. The central characters are all engaging, in general.

I will caution, for very visual readers (like me), you might get some dark room syndrome at times, as description is minimalistic at many points. Similarly, the framing of information (giving context on introducing new information) is minimal at times in favor of keeping the pace rolling and letting you catch up. These aren't strictly flaws, just preference apects to be aware of.

This book has everything - amazing read

This book is intricate and well thought out but also really thrilling. The world it builds is big, the characters are all complex and nicely drawn. The story is really well paced and moves along fast. There’s a mystery, there’s love, there’s history and science. The narrator does a brilliant job of conveying the characters and the language system of the ship. Best book I’ve read in a long time!!

check for trigger warnings before you listen. this book explores and exposes many current issues, the way only science fiction can. beautiful and deep story. well worth a few listens.

A new standard for literature

Absolutely breathtaking. Must read. This is the kind of book that crawls inside your soul and lives within you for the rest of your life.

One of the best audiobooks I have had the pleasure to hear. I had previously read the book in print, but the audio added so much to my understanding of the story and the characters.