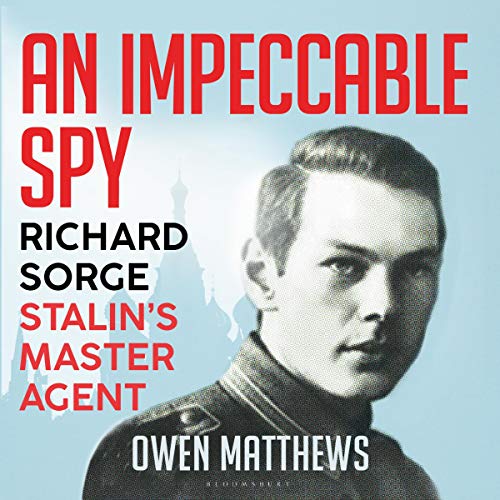 Richard Sorge was a man with two homelands. Born of a German father and a Russian mother in Baku in 1895, he moved in a world of shifting alliances and infinite possibility. A member of the angry and deluded generation who found new, radical faiths after their experiences on the battlefields of the First World War, Sorge became a fanatical communist - and the Soviet Union’s most formidable spy.

Like many great spies, Sorge was an effortless seducer, combining charm with ruthless manipulation. He did not have to go undercover to find out closely guarded state secrets - his victims willingly shared them. As a foreign correspondent, he infiltrated and influenced the highest echelons of German, Chinese and Japanese society in the years leading up to and including the Second World War.

His intelligence regarding Operation Barbarossa and Japanese intentions not to invade Siberia in 1941 proved pivotal to the Soviet counteroffensive in the Battle of Moscow, which in turn determined the outcome of the war.

Never before has Sorge’s story been told from the Russian side as well as the German and Japanese.

Owen Matthews takes a sweeping historical perspective and draws on a wealth of declassified Soviet archives - along with testimonies from those who knew and worked with Sorge - to rescue the riveting story of the man described by Ian Fleming as 'the most formidable spy in history'.

"A fascinating biography. Owen Matthews tells the story of Sorge’s extraordinary life with tremendous verve and expertise and a real talent for mise en scène. Shanghai in the 1930s and prewar Tokyo, Sorge’s stamping grounds, come vividly alive in these pages and the portrait of Sorge himself that emerges is richly authentic." (William Boyd, New Statesman)

"A superb biography. Alive to Sorge’s human flaws as much as to his professional competence, and with a salutary vein of anger running through it. More than a hundred books have been written about him and this is undoubtedly the best: detailed, wry, sympathetic and occasionally oddly moving." (Ben Macintyre, The Times)

This book is a gossipy tale chiefly of Sorge's loves and affairs with an occasional espionage event described in detail. The narration is a bit lack luster and maybe this undermines the narrative but after about 10 hours I realized I didn’t know much more of this potentially gripping story than I gained from the first chapter. I think this has been written to appeal to romance readers and should have been serialised in Cleo.

The book. The book is both well researched and engaging. The pre-dominant theme – Sorge’s talent and appetite for “seducing” people – at times felt forced and overplayed. But overall the story holds together well and is not really at “disfigured” by historical facts. This is not a fictional spy-novel, but an account of actual events that would be hard to fully appreciate without knowledge of the historical background on which it unfolds. I seriously doubt that many readers/listeners could claim that much historical knowledge before starting the book. So, a good chance to actually learn something. 😊

The narration. “Artistically” it is not bad at all. It is clear and keeps good pace. One problem – and rather annoying one – is that the narrator mercilessly mangles foreign words, names and places, although they are quite accurately spelled in the text itself. This is a disappointingly poor standard for an an international spy narrative which is packed with foreign words.

If you’re a World War II buff at all this is a great insightful read into the German Japan Russian end of the global conflict. Really really good.

Even if you have no interest in spying, you'll learn a great deal about World War II events and particularly the perfidy of Stalin and how one man determined the outcome of World War II by discouraging Japan from attacking the USSR in 1941 which would likely have caused the German conquest of Russia and then possibly of the UK too. An enthralling book.

There were more political details than I would have liked, but I really enjoyed the details about his personality.