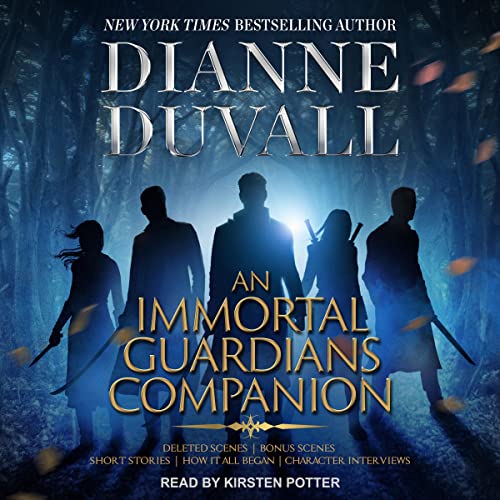 Your favorite character, Sheldon, here. If you're an Immortal Guardians fan, I think you're really going to enjoy this companion. Dianne has packed it with over a dozen deleted scenes that feature many of the characters you've come to know and love plus a bonus scene from Cliff's Descent that you won't want to miss.

You'll also find every character interview Dianne has ever written inside. (Those of you who've encountered a few in the past know the ones I conduct are the best.) If you've never heard one or you missed a few, then pick up a copy, sit back, and laugh while I interview Immortal Guardians and the loves of their lives for the network. Even Chris Reordon and Todd down at network headquarters get in on the action.

I also interview Dianne and ply her with questions I thought you'd like to ask her. Throw in a couple of short stories, what inspired the Immortal Guardians series, and a brief Who Does What Now? list, and you're bound to enjoy it.

A fun book of extras!

I love all thing Immortal Guardian so this book is a fun way to hold me over while I wait for the next one. The bonus scene are great and I really enjoyed all of the extras. And of course Kristen Potter is amazing and brings this world to life.

I love this series but not so much this .. I enjoyed it up till the interviews ..

They are cut short and very repetitive and became very boring.. so I'm disappointed in this.. they talked about gifted ones DNA in every interview over and over then 90 percent of the interviews are cut short because they want to go have sex.. it was hard to finish this book ..

I would have loved to hear more of the stories I really enjoyed that part ..

First I want to say I am a big fan of this series as well as the spinoffs! This book, however, not so much! Short tales were repeated several times. Most I already knew. Did not hold my attention or wish for more. Sorry!

For those who have followed the Immortal Guardians, Gifted Ones, and Aldebarian Alliance series and want a peek into the characters free time, deleted scenes, plus special features, GET THIS BOOK!
Dianne Duvall has taken her readers on a journey for over ten years now, one full of mystery, intrigue, action, and love. Every character matters to the author which in turn has the reader cheering them on and forever desiring more! Readers know we will see most of the characters pop into each book and always ask for more books!
The ending special interview Sheldon performs is the perfect ending to this book, and I cannot wait for another one just like this come ten or so years down the road. Thank you Dianne Duvall!
As always, Kirsten Potter is phenomenal at what she does! So many accents! I'm happy to take this journey with her in my ears!
On to the next!

A must read for IG fans!

I smiled and laughed out loud while listening to this companian book. I appreciated the addition of the deleted parts of the stories. For me, it enriched the story; I usually choose to read or listen to the unabridged version because of that fact. I'll have to check out your blogs, or better yet, just keep compiling them and put them together like you did here! Again, l really loved listening about all my favorite characters!

I love everything you wright.

I'm so glad that this not the end of the series. I'm also glad you gave us these scenes. I love all of the details I can get about IMMORTAL Guardians and Gifted ones and the people around them.

I disagree with many who felt frustrated with the characters all wanting to interrupt the interviews to go have sex. yes they did but if you've read/listened to all the books then I think the characters are doing it more for the enjoyment of making Sheldon uncomfortable because it's so easy to pick on the youngest ever Second in history. just my take on it

Such A Fun Companion to the Series

Loved it! This was funny and I loved getting a little insight into how the stories come to Dianne and how the series evolved and continues to evolve. Nice to know it will be around for a long time. This was truly enjoyable and now I know about the interviews and blog tours. Thanks for thinking of the fans.

Cliff's wedding was wonderful! The interviews were repetitive , we know what a gifted one is.

Cliff's wedding is in this!!!! Reason enough for 5 stars.
The interviews...... I would recommend only listen to a few at a time, I was going all the way through and if I have to hear about "Strong Women are SSSOOOO HOT!" or "DON'T read Sheldon's thoughts!!!" again it would be to soon. I like the interview interactions & I understood why the explanation for gifted or gifts was explained every time, but it's like hearing how "Roland is anti-social" over and over again, in the same book!!! (Which has happened & is 1 of my only dislikes about the entire series.) Too much. We know already!
Narrator..... as always great fabulous job. Excellent.