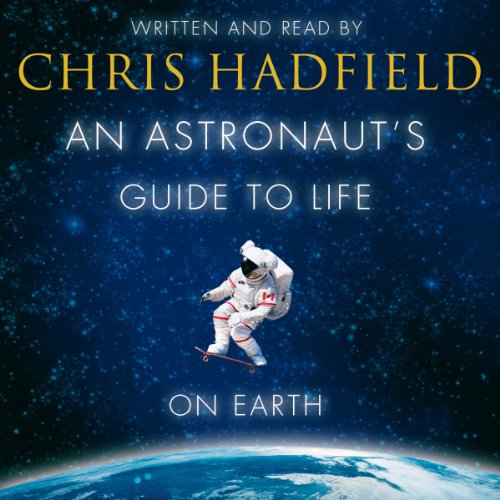 An Astronaut's Guide to Life on Earth

An Astronaut's Guide to Life on Earth

Deeply moving in its ability to engage, An Astronaut’s Guide to Life on Earth is written by NASA Astronaut and YouTube star Colonel Chris Hadfield with the complete and unabridged audiobook narrated by the author. Hadfield’s writing is exquisite, his stories exceedingly entertaining and wisdom unbounded. His lifelong determination to make his dreams come true is tremendously inspiring. This is one of those books that makes you look internally at yourself and your life and question if you’re living it the way you should. Available now from Audible.

An Astronaut's Guide to Life on Earth is an inspirational memoir of space exploration and hard-won wisdom, from an astronaut who has spent a lifetime making the impossible a reality.

Colonel Chris Hadfield has spent decades training as an astronaut and has logged nearly 4,000 hours in space. During this time he has broken into a Space Station with a Swiss army knife, disposed of a live snake while piloting a plane, been temporarily blinded while clinging to the exterior of an orbiting spacecraft, and become a YouTube sensation with his performance of David Bowie's ‘Space Oddity' in space. The secret to Chris Hadfield's success - and survival - is an unconventional philosophy he learned at NASA: prepare for the worst - and enjoy every moment of it.

In his book, An Astronaut's Guide to Life on Earth, Chris Hadfield takes listeners deep into his years of training and space exploration to show how to make the impossible possible. Through eye-opening, entertaining stories filled with the adrenaline of launch, the mesmerising wonder of spacewalks and the measured, calm responses mandated by crises, he explains how conventional wisdom can get in the way of achievement - and happiness.

His own extraordinary education in space has taught him some counterintuitive lessons: don't visualize success, do care what others think, and always sweat the small stuff. You might never be able to build a robot, pilot a spacecraft, make a music video or perform basic surgery in zero gravity like Colonel Hadfield. But his vivid and refreshing insights in this book will teach you how to think like an astronaut, and will change, completely, the way you view life on Earth - especially your own.

Chris is a rockstar

Being a huge space geek, I thoroughly enjoyed this book. Chris is the nicest and most humble guy you will ever come to know. His stories are of an average man doing extraordinary and not so extraordinary things.

enjoyed every minute of this book. thank you Chris for sharing a piece of your fascinating life with us.

Fantastic story read by the author with passion!

What made the experience of listening to An Astronaut's Guide to Life on Earth the most enjoyable?

Listening to the details of space life from the author himself.

What was one of the most memorable moments of An Astronaut's Guide to Life on Earth?

Details of the re-entry of Chris Hadfield and his crew in the Russian Soyuz spacecraft.

Which character – as performed by Chris Hadfield – was your favorite?

Not really - it would have taken too long, but I liistened to it twice a day for a week and loved it.

An absolute must-listen to all the dreamers!

If there's one type of videos on YouTube that I can never get enough of, it's space themed videos about performing simple everyday life tasks in space. This book has those details – and so much more!

An absolute must-read (or rather, listen) for all the dreamers out there! Most of us won't ever get to go to space, but we can learn about it and get inspired to live on Earth by doing so.

The fact that Chris Hadfield himself narrates the book was the reason I've chosen an audiobook rather than a physical copy, and it didn't disappoint for a second. Loved it!

Absolutely loved this book! I've always been fascinated by space and hearing stories from someone who's been there is just amazing. If Chris ever feels like telling more stories about his journey, I'm ready to listen.

A wonderful book. Real guide to improve yourselves and to be a really good earthling.

Couldn’t stop listening to this.. To me the book was very inspiring and awaking healthy curiosity.
Wish I have read something like this at the age of 15, but it’s never too late :-)

What an inspiring and lovable book! The book became even better when it was read by the author and astronaut itself. Chris really made it sound like he would telling his stories for you out of the memory instead of roboticlly reading from the computer.

I've listened many selfhelp and motivational books but this takes the cake. It is so much different when you are hearing concrete advices spiced up with the actuall experiences of Chris Hadfield. I'm probably sounding too praising but this really had a huge effect on me that no other book has had.

I deeply recommend for everyone interested in space and experiencing life more fully.

What a fantastic time I had....

I had a fantastic time listening to it and more so because it’s read by Chris Hadfield himself.
Just amazing.

This has audio book is by far, one the best treasures I've ever found. It just goes to show you that no matter who you are and what you are, we are all essentially just humans, people. I can't say much, you just have to read it or listen to it. Very down to earth

A sensation to both read and listen

This is an excellent books not only for it's exceptionally recherché yet scintillating aphorisms it contains. Nonetheless, this book would be highly worthwhile to peruse.

A wunderful perspective on life

A book to remember

Honest calm inspiring insights in a life we all should try to live up to.

Really loved this book. Great autobiography full of fun and exciting stories. Will recommend to my friends.

Among my favorites from now on

I never thought I could find some of the most wise advices for practical life in this book. Hadfield presents a series of events that bacame turning points in his career, all of them with a witty message that everyone can apply to daily life. The meticulous approach to risk management as an astronaut is a value framework for making decisions, and how the unforeseeable events are just around the corner, which holds for personal and professional life. This gave me a new viewpoint on the power of negative thinking and how it complements a positive attitute towards life.

Listened to the audiobook read by the author since that's my favorite kind of audiobook now.
Chris Hadfield is a really aspiring and motivated person who decided to become an astronaut when he was nine years old and followed his dreams ever since. Hard work and dedication finally paid off and he ended up being the first Canadian astronaut to walk in space.
The writing was really entertaining and well paced, loads of cool stories and insights into the life of an astronaut and what's necessary to get there.
I really enjoyed the narration by Chris Hadfield himself, he likes what he wrote and quite often he'd chuckle a little which made me laugh too.

Wonderful books that tells a lot about soft skills

This book by Chris Hadfield is a nice story, but tells a lot about the essential soft skills required to be successful in life and work. Chris' story contains encouraging wisdom how important our perspective on life and our actions is. Driven by a goal he is thriving for he develops his career ending up as astronaut. However, being humble and working hard on the actual problem at hand made him successful.

It was an interesting and entertaining biography written in such a manner as to entertain and compel the listener to do something relevant right now. I loved it and many of the approaches to live by the author, I hope I will be able to incorporate in my own life.

Was hat Ihnen am allerbesten an An Astronaut's Guide to Life on Earth gefallen?