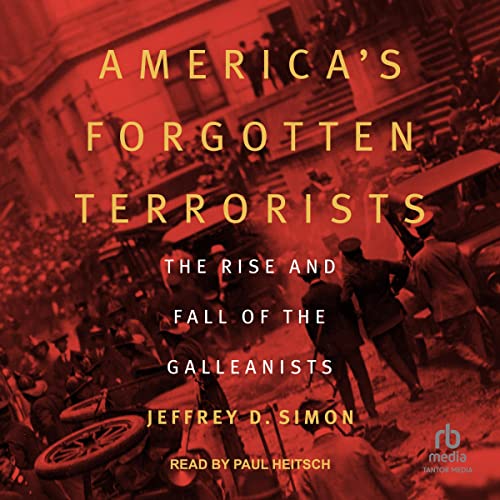 Though largely forgotten today, one of the most destructive terrorist groups in the United States was the Galleanists, a fiery band of Italian anarchists active during the early 1900s. In America's Forgotten Terrorists, Jeffrey D. Simon shows how alienation and frustration among segments of a community were transformed into a militant extremist movement.

Luigi Galleani, a gifted writer and speaker, tapped into widespread disappointment among Italian immigrants concerning their lives in America. Unemployment, low wages, long working hours, discrimination, and a poor quality of life made many Italian immigrants receptive to his words. The Galleanists introduced terrorist tactics and strategies that are still used today: they were the first group to send package bombs across the country and to exploit the media for their own advantage.

The story of the Galleanists is a chilling journey through a volatile period in American history, including labor-management conflicts, World War I, and the Red Scare. An expert in terrorism, Simon offers striking insights into the Galleanist era and some of its eerie connections to modern America, calling us to recognize the risks of repeating our history. How the Galleanists operated and how the U.S. government responded hold lessons for today as we continue to deal with the threat of terrorism.