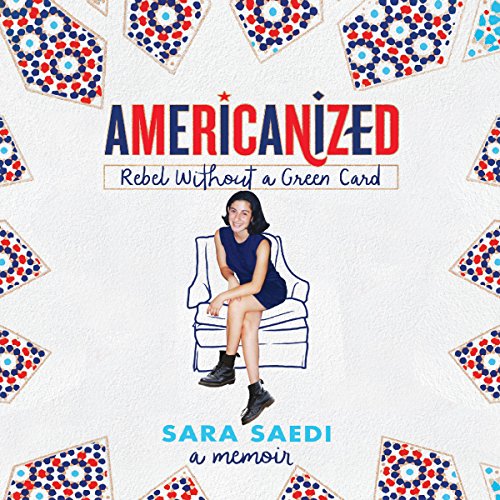 The hilarious, poignant, and true story of one teen's experience growing up in America as an undocumented immigrant from the Middle East, perfect for fans of Mindy Kaling and Lena Dunham's books.

At 13, bright-eyed straight-A student Sara Saedi uncovered a terrible family secret: She was breaking the law simply by living in the United States. Only two years old when her parents fled Iran, she didn't learn of her undocumented status until her older sister wanted to apply for an after-school job but couldn't because she didn't have a Social Security number.

Fear of deportation kept Sara up at night, but it didn't keep her from being a teenager. She desperately wanted a green card, along with clear skin, her own car, and a boyfriend.

Americanized follows Sara's progress toward getting her green card, but that's only a portion of her experiences as an Iranian "American" teenager. From discovering that her parents secretly divorced to facilitate her mother's green card application to learning how to tame her unibrow, Sara pivots gracefully from the terrifying prospect that she might be kicked out of the country at any time to the almost as terrifying possibility that she might be the only one of her friends without a date to the prom. This moving, often hilarious story is for anyone who has ever shared either fear.

Growing up American as an undocumented alien

The dichotomy of Sara's life in the U.S. was interesting as she was both privileged (plastic surgery as a birthday present???) but faced citizenship issues due to government bureaucracy. The narrator's tone was laced with a little too much sarcasm and dampened the empathy I probably would have if I read it myself.

Nice until it got tribal/political

Good to see another Iranian having the same experience. Very well written and funny.

Do you think Americanized needs a follow-up book? Why or why not?

Stay away from politics. I had a high opinion of the writer's intelligence until she got to simple-minded left-wing interpretations of the world. Silly.

My daughter is engaged to a Dreamer from Pakistan. Though Sara is from India, it gave me insight into the world of the undocumented immigrants. It was also laugh out loud funny in many places. Bonus!!

Growing up as an undocumented immigrant (back in the 90s when the term "illegal alien" was the go-to) Sara Saedi tells the story of arriving from Iran to getting her Green Card with humor, empathy, and the appropriate amount of teen angst. The only downside of the audio version of this book is not being able to see the photos she refers to. This book also offers tips and action points for teens who might be in this situation currently. It's a feel good story, a family story, and a very American story.

Not a lot of depth to her story. Being born outside of the US myself there are some elements I can relate to her story. However I understand the real sacrifices for our freedom is by America and the men and women who fight for it everyday. Next time you fly international Saara you remember our men and women in uniform and not your parents.