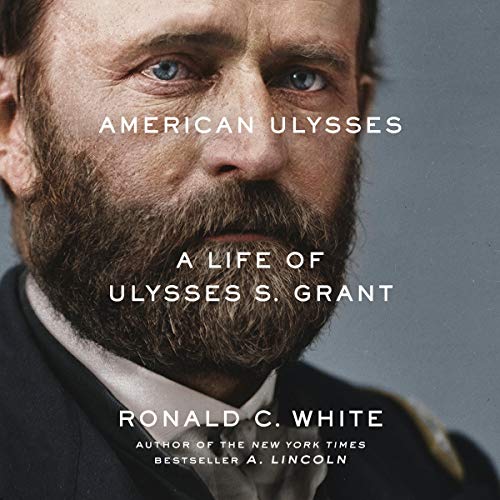 A major new biography of the Civil War general and American president, by the author of the New York Times bestseller A. Lincoln. The dramatic story of one of America's greatest and most misunderstood military leaders and presidents, this is a major new interpretation of Ulysses S. Grant. Based on 7 years of research with primary documents, some of them never tapped before, this is destined to become the Grant biography of our times.

This is the most insightful and instructive biography I have ever read. Not only does it give overdue credit to a truly great military leader and president and genuinely kind and humble man of extraordinary accomplishment, but it also provides the reader of a more complete and compelling picture of the monumental challenges faced by the nation and it's leader following the Civil War and it's aftermath. This work is must read history.

A New Campaign to Reasses Grant

If you could sum up American Ulysses in three words, what would they be?

White has enough confidence in his research and ultimately his discernment to render the story in a straight-forward manner that might have pleased its subject. White doesn't besiege the reader with footnotes, counterpoints or what-ifs, instead placing the reader in that time and place, with Grant.

The breakout towards Jackson during the Vicksburg Campaign. White is able to capture the intensity and pressures bearing down on Grant, and when, at last, Grant's forces move east when their target lay west, the reader gains a sense of Grant's audacity, nerve and will.

I am very familiar with the details of Grant's life and times from other biographies and histories. Yet there is cumulative power in White's writing and his description of Grant's last "campaign" at the close of his life was more moving than any other treatment I had encountered.

Any author attempting a comprehensive biography of such a momentous figure has to make choices about length and depth of detail. White's concentration is on the prominent figures on the Union side, and there is a nutshell quality to his descriptions of Grant's adversaries (even Lee). Ultimately that's a justified treatment of the vanquished. White briefly discusses Grant's long banishment into the historical wilderness, as his reputation declined and languished after his death, but White misses an opportunity to explore the context of the ongoing struggle by many to preserve the most imperfect aspects of the United States that led to the war and which continue to trouble the nation on the low boil. The most eye-opening aspect of the book was the depth of Grant's commitment to the rights and protection of the freedmen. If he was late getting there, his absolute, unshakable resolve on this point caused me to seriously reassess his presidency, and gave me a greater appreciation of his remarkable character.

A True All American

Sadly, the significance of Grant is somewhat shadowed in history by Lincoln. I'm the better for listening to this book. Fantastic book and narrator.

I was uncertain about buying this book since I had already read all the volumes of Grant's autobiography as well as quite a few books about Grant's and Sherman's campaigns during the Civil War and I feared that purchasing it would be a waste of my time and money. I was wrong. When I was in public school the history classes that covered the Civil War referred to Grant as a poor commander, someone who wasted human lives and only won because of the overwhelming numbers of Federal troops, and that was a view I carried with me as I became an adult, and it only began to change as I started to read newer books covering the war. Shelby Foote's multi-volume history made me start to believe that perhaps what I had been taught in school was wrong and, as I read more and more books about the campaigns in the West, I became increasingly convinced that my what I thought I knew of Grant and his generalship was wrong, and badly so. American Ulysses is so well written that in spite of all I had previously read about Grant and his campaigns my interest never flagged and I found it difficult to stop listening. Arthur Morey's narration is so well suited to the material that time flew as I listened to the book and I found myself looking forward to listening to more the next day. The book is more of a biography than a retelling of the battles of the war and the narrative never gets bogged down in military details of how the battle progressed, but still manages to cover what happened and why. A large part of the book covers Grant's life after Appomattox, his issues with the Johnson administration and his two terms as President and covers his efforts to insure that those freed by the Civil War were able to exercise their rights as citizens. All of this was new to me as it was never covered in my public school classes and was not in any of the Civil War books I read, but Grant was committed to insuring real freedom and citizenship for those freed by the war and his battles to try to insure the former slaves their freedom is covered in detail, as are the reasons for the failure of that effort. Perhaps the most poignant parts of the book cover the period of his life when this man, so able to sort the wheat from the chaff in his generals, failed to see how he was taken advantage of by those he trusted. Mr White, and history, have shown that although Grant's administration was plagued by financial scandals, he himself was never touched by a hint of those scandals and left office with his honor and honesty intact. The final scandal, which bankrupted him, again involved those he trusted and his actions in trying to repay those debts that fell on him, only again proves how honest a man he was. This is a wonderful biography, full of information new to me, wonderfully written and wonderfully narrated, and I highly recommend it to anyone interested in General Grant and his life.

I loved this biography of Ulysses S Grant. Grant came alive as a person in the early chapters, both growing up, and in his West Point years. His life story is fascinating from start to end, through the Civil War, and his presidency in the tumultuous post-war period. The writing in this bio is great, and I never knew what a heroic man Grant was. Grant is best known for his military genius, and this book captures that well. Grant was a man of courage and integrity throughout his life, and he inspired me as a leader who was ahead of his time as a passionate advocate of civil rights. This biography captured his family life well, but I wanted to know more about how he dealt with marrying the daughter of a slave owner from St. Louis. The years of his presidency focused mostly on the politics of the day, which was fascinating but less personal than the other years of his life. This was a long book, but most of it was totally engaging, and all of it was so informative. The connections to politics today jumped from the page. After listening to this, I have a new American hero. This book was emotionally and intellectually engaging - a great combo.

A great man and a great book.

One of the most poignant biographies I have read of a great man, general and presidents.

Grant and this book are highly recommended.

I knew more of Grant the soldier but even them only in the context of other books. I was surprised by his depth, from soldier, General, President, and all around American ambassador and finally author. I also give high marks to the narrator. I have read A. Lincoln but this author and reviewed that highly as well.

Ronald White succeeds admirably well in capturing Grant as a student, general and president. There is nothing more difficult than writing about battles, but white makes every battle of the Civil War exciting. Grant's story is a sad one. All, it seems he ever wanted to do was teach in a university. He ended up serving his country quite selflessly. Unfortunately, many people took advantage of his kind nature. I can't wait to see how Ron Chernow will compete with White when his biography on Grant is released later this year.

You really need the written book available as reference, otherwise it just gets too complicated to follow from listening. The names, dates, and places gets confusing, especially without maps, tables, or diagrams, unless you are already know them by heart. I had the same problem with Shirer's Rise and Fall of the Third Reich, it was a great audiobook but I constantly needed to refer to the written book which I bought soon after starting the audiobook.

A great history of Grant!