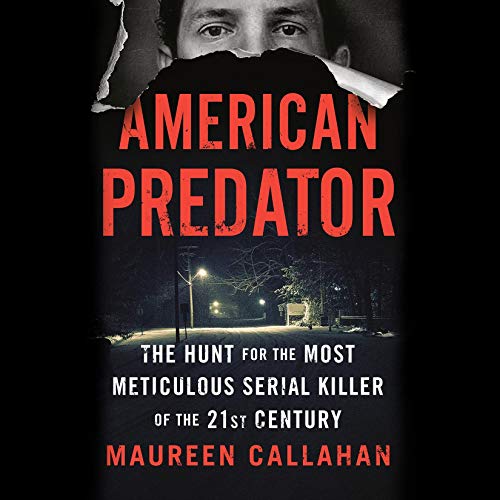 "Maureen Callahan's deft reporting and stylish writing have created one of the all-time-great serial-killer books: sensitive, chilling, and completely impossible to put down." (Ada Calhoun, author of St. Marks Is Dead)

Ted Bundy. John Wayne Gacy. Jeffrey Dahmer. The names of notorious serial killers are usually well-known; they echo in the news and in public consciousness. But most people have never heard of Israel Keyes, one of the most ambitious and terrifying serial killers in modern history. The FBI considered his behavior unprecedented. Described by a prosecutor as "a force of pure evil", Keyes was a predator who struck all over the United States. He buried "kill kits" - cash, weapons, and body-disposal tools - in remote locations across the country. Over the course of 14 years, Keyes would fly to a city, rent a car, and drive thousands of miles in order to use his kits. He would break into a stranger's house, abduct his victims in broad daylight, and kill and dispose of them in mere hours. And then he would return home to Alaska, resuming life as a quiet, reliable construction worker devoted to his only daughter.

When journalist Maureen Callahan first heard about Israel Keyes in 2012, she was captivated by how a killer of this magnitude could go undetected by law enforcement for over a decade. And so began a project that consumed her for the next several years - uncovering the true story behind how the FBI ultimately caught Israel Keyes, and trying to understand what it means for a killer like Keyes to exist. A killer who left a path of monstrous, randomly committed crimes in his wake - many of which remain unsolved to this day.

American Predator is the ambitious culmination of years of interviews with key figures in law enforcement and in Keyes's life, and research uncovered from classified FBI files. Callahan takes us on a journey into the chilling, nightmarish mind of a relentless killer, and to the limitations of traditional law enforcement.

“A deep dive into the twisted life of Israel Keyes, ‘a new kind of monster’.... Serial killers often commit their crimes close to home, inside a comfort zone, but as the author documents throughout this compelling narrative, little about Keyes fit the conventional serial-killer mold...[Callahan] offers fascinating context about law enforcement investigative techniques and revelations about how a murderer can strike again and again without being detected for more than a decade.” (Kirkus Reviews)

“American Predator is the scariest book I’ve ever read. No exaggeration - the book you hold is bone-chilling. Maureen Callahan explores the black heart of a new kind of American monster - a serial killer that confounded our most elite criminal profilers - and the race-against-time investigation to follow. This is the work of a journalist in her prime, telling you the story the FBI doesn’t want you to hear and delivering an unforgettable tale of evil that will haunt you. Mark my words: This modern true crime classic will stand with the likes of Jeff Guinn’s Manson, Ann Rule’s The Stranger Beside Me, and Michelle McNamara’s I’ll Be Gone in the Dark.” (Susannah Cahalan, New York Times best-selling author of Brain on Fire)

“Investigative journalist Callahan provides a chilling true-crime narrative in this detailed study of Israel Keyes, whom she describes as ‘a new kind of monster, likely responsible for the greatest string of unsolved disappearances and murders in modern American history.’... Through Callahan’s access to many of the key players in law enforcement, she has produced the definitive account of a terrifying psychopath.” (Publishers Weekly)

Why you shouldn’t listen to Reviews

This read is exactly why you have to judge things for yourself & not depend totally on reviews. I almost didn’t buy this from all the “man voice” comments. The reader of this book is so awesome until I have to wonder if people are actually listening to the book or if they’re reading the reviews and simply commenting in kind.
Landon makes this book unputdownable. Please see for yourself. You can barely differentiate between her “man” voice and her narrative woman’s voice. There is only a slight lowering of the voice to show changes btw speakers. Had she not done that it would have been difficult to keep up if you multitask, like me, while listening to books and get distracted for a moment or two. Please LISTEN FOR YOURSELF!

How did he slip by?

How is it possible that he is not talked about more among true crime enthusiasts? Being raised with constant changing religious views, the isolation of living on the outskirts of small Utah towns, Israel Keyes had not only an interesting upbringing but you can see the many signs that lead him to become the monster that he was. This book I have recommended to many people. If you are interested in true crime this is a must read.

Ever wonder what it might be like to hear a crime thriller as read by Alexa? Wonder no more.

not my style, for 2 reasons

I enjoy True Crime nonfictions- I mostly enjoy how they get caught- the forensics, the work and luck that go into finding them and getting them to trial and the final justice- this book, other than the very beginning, provides neither. They start backwards from catching him and then we find out he is treated like a king, while incarcerated, in order to get information from him the investigators and prosecutors letting him call all the shots as he vividly describes the horrors of the murders- all the hour-by-hour terror the victims went through- then they go back to being enthralled by him as gives away more and more to the prosecutors- in the end, his demise is not justice but getting his own way..our system of doting on serial killers in order to find bodies and get local glory for the DA's is wrong-

The reader is hard to listen to

Great story that keeps you intrigued but its overshadowed by a reader, who when switches to a male characters voice, sounds very awkward. But beautifully written

Please, please, for the love of all that is good in this world, Ms Amy Landon, in any future audiobooks you record, PLEASE -- stop doing your "man voice." This would be a fine example of a better-than-average true crime book about a subject that has long needed a comprehensive storyline like this, but oh my gawd. This would be an example of a slightly poorer-than-average narration: robotic, upspeak-ridden, but generally forgivable. But the man voice. Lord almighty, the man voice. This is a book about a man. Most of the investigators are men. There is nothing wrong with a female narrator reading a female author's words. Until the reader in question starts putting on a deep, cartoony, buffoonish manspeak affectation for every male who speaks in the book. It's more than distracting. It was almost funny the first time..... this isn't a comedy book. It got unfunny really quickly. I really should have bought the Kindle version.

I loved this book and I highly recommend it. my only wish is that it had a better Narrator. This Narrator's mens voice impressions all sound exactly the same, so when she is reading conversations its confusing and sounds like the same man talking to himself. Most Narrator's will slightly adjust the tone or speech pattern, where as this one has 2 voices, a Male impression and her own voice. Like I said she wasn't horrible but that just bugged me. Overall great story and dibs to the author for getting us more details on Israel Keyes.

The “man voice” was distracting and unnecessary in what could have been a great telling of a thorough research job on Keyes. The narration made it very hard to focus on the story.

The first thing to mention is the narration. The narrator does unfortunately affect a ridiculous voice when speaking as male characters. This is an annoyance, but not a fatal one, as other reviewers may have felt. However, she does so with little or no distinction between characters, doing essentially the same dopey guy voice for all the men. Also, some questionable syntax by the author perhaps leads the narrator to speak awkwardly, as if reading a page where a line finishes after a carriage return. I would expect that an adept professional, regardless of gender, could navigate these issues better.

The other point is that the subtitle is a bit misleading as the "hunt" is only contained in the early parts of the book, with most of the book detailing interviews with, and providing background information about, Keyes. And additionally, the book contains (perhaps justified) sometimes vicious attacks on the competence of a federal prosecutor injecting himself into interrogations. Those may have been the best parts of the book, actually.

All in all, a decent enough effort. (BTW, speeding up a little may help with the voice issue).