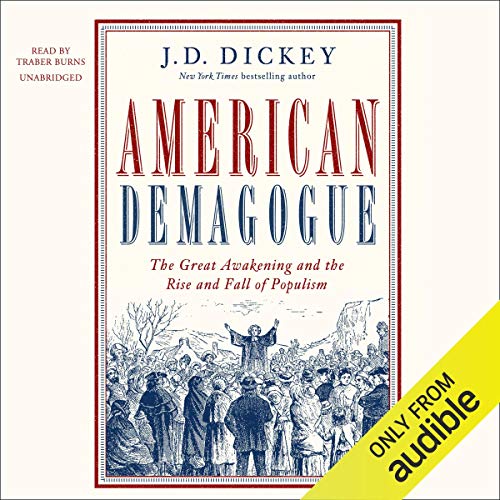 A New York Times best-selling historian examines how demagoguery and the populism it inspires - for good and ill - is embedded in the very soul of our nation.

In September 1740, New England experienced a social earthquake. It arrived not in the form of a great natural disaster or an act of violence, but with the figure of a 21-year-old preacher. People were abuzz with his stunning oratory, his colorful theatrics, and his almost ungodly sense of power and presence.

When George Whitefield (also spelled Whitfield) arrived in the small towns and hamlets that made up the American colonies, he proved to be much more than anything the residents could have expected. His reputation and growing legend had been built on his brilliant speeches and frightening tirades, and his fame now engulfed what would become America. He demanded his listeners repent their sins and follow the true word of God - his. He had knowledge that only he could unlock for the American people.

Years later, they would call it a Great Awakening, and it would reorder the colonies and wend its way into the very fabric of what America would eventually become. Soon after Whitefield and his followers reached their zenith, things began to fall apart. And what once seemed so certain - a puritanical utopia - vanished like a dream, leaving the Awakeners stripped of their earthly power.

American Demagogue is the story of this rapid rise and equally steep fall, which would be echoed by authoritarian populists in later centuries and American demagogues yet to come. As we enter a new era of populism and demagoguery on both sides of the spectrum, we need to understand America’s paradoxical passion and disdain for demagogues throughout our history. Though centuries have passed, the themes remain the same - anger, grievance, dissension, self-promotion, and even brute force - as this cycle of rise and fall continues.