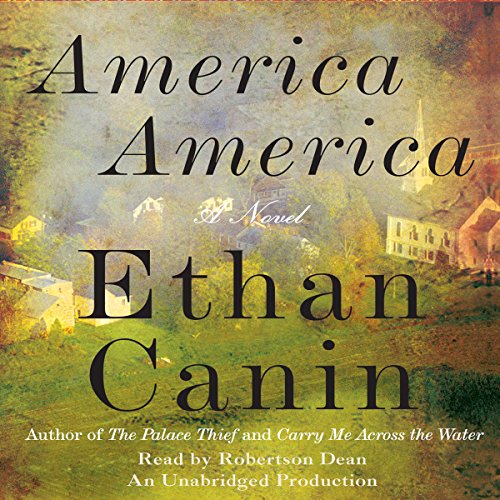 From Ethan Canin, best-selling author of The Palace Thief, comes a stunning novel, set in a small town during the Nixon era and today, about America and family, politics and tragedy, and the impact of fate on a young man's life.

In the early 1970s, Corey Sifter, the son of working-class parents, becomes a yard boy on the grand estate of the powerful Metarey family. Soon, through the family's generosity, he is a student at a private boarding school and an aide to the great New York senator Henry Bonwiller, who is running for president of the United States. Before long, Corey finds himself involved with one of the Metarey daughters as well, and he begins to leave behind the world of his upbringing. As the Bonwiller campaign gains momentum, Corey finds himself caught up in a complex web of events in which loyalty, politics, sex, and gratitude conflict with morality, love, and the truth.

America America is a beautiful novel about America as it was and is, a remarkable exploration of how vanity, greatness, and tragedy combine to change history and fate.

great story, great narrator, but you have to listen carefully or you may miss key plot moments. i love Ethan Canin and this novel is a thoughtful portrayl of American politics, public and private values, family and growing-up. I will say, there are definite shades of the Kennedy legacy and Chappaquidick that are kind of obvious from the beginning, but there are plenty of other surprises that keep you interested until the end.

Kept me listening even when I shouldn't have been

Just an engrossing, fast moving story set during an historical period I knew little about so I learned something too. Good characters and not so many you were confused but enough to keep things interesting and move the story from several different perspectives.

What did you love best about America America?

I really enjoyed this book. Sometimes I had a hard time switching back and forth from present time to the past, but overall it was awesome. Very thought provoking.

I have always been a big fan of Ethan Canin so I was very excited to start listening to America, America. I was quite disappointed in the overall story. There is a great story there, but Mr. Canin failed to draw it out. The story lost energy when the author tried to be a little too clever in trying to surprise the reader along the way in a very understated way. It had so many possibilities that I wished it could be revisited. Still, it is better than most books so deserves the 3 stars.

This is a very interesting book, well written and fascinating about people and power and politics. I thought about the characters long after I finished listening.

This author does a particularly good job of character development. From the first word you are invested in the life of Corey Sifter and the Metarie family. The story takes you into the real world of a political campaign with all of its warts. And yet the author manages to throw in a few surprises that makes the reader go Really? I thoroughly enjoyed this listen and would recommend it highly.