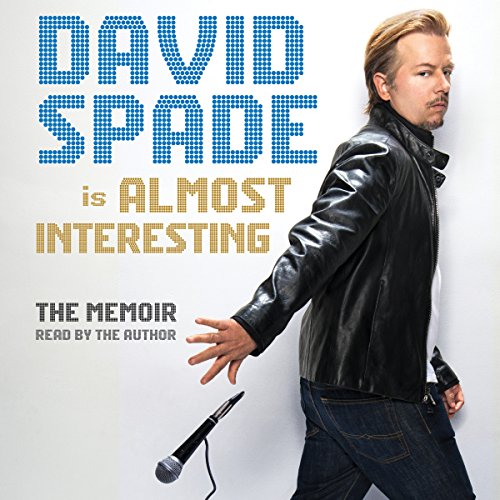 A hilarious and biting memoir from the actor, comedian, and Saturday Night Live alumnus.

David Spade is best known for his harsh "Hollywood Minute" sketches on SNL, his starring roles in movies like Tommy Boy and Joe Dirt, and his seven-year stint as Dennis Finch on the series Just Shoot Me. Now, with a wit as dry as the weather in his home state of Arizona, the "comic brat extraordinaire" delivers a memoir.

Spade takes fans back to his childhood as a wannabe cool younger brother and recounts his excruciating road tour to fame - when he was regularly mistaken for a 14-year-old. He dishes about his time on SNL during the beloved Rock/Sandler/Farley era of the 1990s and brags about the ridiculous perks that fame has brought into his life, including a crazy assistant who attacked him while he was sleeping, being threatened on the street in Beverly Hills by Eddie Murphy, and being one of the shortest guys at the Playboy mansion (the views weren't bad).

Sometimes dirty, sometimes just plain silly, David Spade reminds us what made him one of our favorite funny people.

Everything You Could Want in an Autobiography

David Spade's complete self deprecating honesty. Let me note that I have never been a Spade fan, in fact, I pretty much loathed him to the point that I refused to watch most sitcoms or movies he was in simply because he was in them. It was only after I saw one of his stand up specials (I believe his most recent one) that I came to realize I actually love David Spade the person (or the person he portrays himself to be, I mean we all show a different self to the public, some are just a lot closer to our true selves than others) it's been the characters he's played that I've never liked. I know actors are separate from their characters but he played that type so often that I guess I mistakenly believed he WAS all those d-bag, ridiculously obnoxious types we all associate with him. What I took from this story was that while in the past he may have teetered insanely close to "being" that guy in real life, I think he always had a good heart & with time he has not only become a decent human being but is also able to reflect on his past behavior & ignorancy with a shudder that most of us can relate to when thinking back on our own youth.

The first few chapters when he discusses his early years. While his childhood was a bit crazier than most, I could relate to so many of his stories about growing up with a single mom as well as the cringe worthy things so many of us do when we're young in an effort to be cool.
Also, when he talks about Chris Farley, you can tell he had a genuine love for the guy & is truly heartbroken over losing his friend.

While some may prefer a word for word narration, I personally enjoy the way Spade sort of speaks the book almost as if he's reliving a funny story with his buddies.
Also, as a woman especially, I could never for the life of me figure out how he was able to score such hot chicks but after listening to this book, I now know! He truly comes off as a genuine & incredibly charming guy. Combine that with his unarming self deprecating wit & humor & a girl will fall for that every time over a guy that's cocky & "too good looking." Well, any woman over 25 anyway.

First off, I literally laughed out loud throughout the book. I love his humor and the delivery. He's so candid...It's surprising and entertaining. He sounds like a super down to earth celeb. Like fame never changed him.... Took long enough and he is an oak for withstanding it all and keeping at it. He is really funny.
I like him more now than before yet I always found his subtle humor really funny. It was worth every penny FOR ME. I realize everyone's humor is different....but the title is a little off. It wasn't almost interesting. It was quite interesting... But he would never call it that because he's super humble and he doesn't want to seem pathetic. But for the record, you're not!! You're really funny :)

At first I was a bit taken aback with David Spade's narration. He speaks fast. I mean really fast. Almost to the point of his words blurring together in a slur. But then I realized that that's just who he is. A hyper energetic person who can't slow down. And then it was fine.

Having previously read Martin Short's (another SNL actor/writer) memoir - I Must Say - I hesitated a bit. I did not particularly like I Must Say. Good thing I bought this. Not that much name dropping, and a lot more fun to listen to.

Spade isn't narrating a book, as much as he's living out his memories while speaking. You're not listening to a book - you're listening to David Spade telling you about his life. Great stuff.

Most of the book is about him growing up, perpetually (and insecurely) trying to get his career to fly. SNL memories is of course a big part. That's a given. Surprisingly almost nothing about his six years of doing Just Shoot Me. A bit strange that.

Best audiobook EVER!! Had me laughing out loud! Listened to entire book in one day and now I'm off to see if D. Spade has more! I think this qualifies me as 's friend' to Mr. Spade!!

Very interesting and transparent and crude.

I have to agree with some reviews I read about the end kind of dying off. I really enjoyed the stories and I love the way David delivered them. I know for many the fbomb is a normal part of their language, but for me, I don't care for it from overusing it as a teen. I am a married mom of 3 and felt guilty listening to some parts because of their raunchiness. But being a huge fan of both him and Chris Farley I wanted to finish so I could really hear what life was like during that time knowing that David must really really miss his good friend and how sad it is that this duo is not able to entertain us anymore. I just love when celebrities openly share their heart because it makes them seem more real. I loved this book, just not a fan of the fbomb being used constantly as an adjective or the c word which I hate even more. And I'm sure most of you reading this will call me a prude and
should be done rolling your eyes by the end of this sentence.

Funny and better than expected

I got this cuz it was half a credit. Not a real David Spade fan. Well read by the author and funny.

David Spade's look back on his life. The book was laugh out loud funny, especially at the beginning. I enjoyed his performance of the book. His timing and delivery of the jokes were great. As a GenX-er I particularly enjoyed his sarcasm about how we used to do things in the "ancient" times before the internet and social media. I only wish that the book was a little longer. I wasn't ready for it to end.

As good or better than bossy pants

Best book (or tied with bossy pants)by a comedian I've read. Always thought spade was annoying and at best he got a slight chuckle out of me. I let my work wife pick this book out to listen too while we drive to lunch. Maybe because I didn't expect anything from it it it turned out really funny and interesting. I'll listen to this again

I wish it were longer, I was sad when it ended.

Love David Spades dry sense of humor and commend his loyalty to his friends. Made me feel better about myself to know he rose from the ranks after a lot of "no's" came hus way.

A little too revealing of Spade's personality

I am a huge SNL fan, and I enjoy Spade's humor. The book had a lot of interesting childhood stories and one could see how his humor developed. i, of course, enjoyed remembering his various SNL pieces, and back stage stories. I empathized with his struggle as a writer, and succumbing to the competition there. And there were some other interesting stories shared about after he became a star. I wanted more about his sitcoms, and experiences getting those going, and less about his relationships or lack thereof. Towards the end, while funny, he came off as arrogant and insensitive towards others, which was a bit of a turn-off.

Love it, the best comedy/tragedy book ever. I listen to this book every night