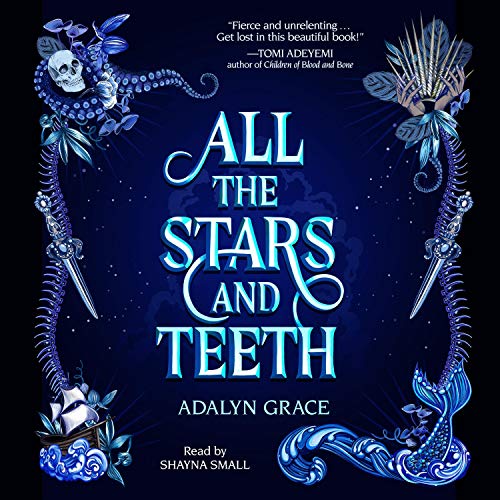 All the Stars and Teeth

“Fierce and unrelenting.... Do yourself a favor and get lost in this beautiful book!” (Tomi Adeyemi, number-one New York Times best-selling author of Children of Blood and Bone)

Set in a kingdom where danger lurks beneath the sea, mermaids seek vengeance with song, and magic is a choice, Adalyn Grace’s All the Stars and Teeth is a thrilling fantasy for fans of Stephanie Garber’s Caraval and Sarah J. Maas’s Throne of Glass series.

As princess of the island kingdom Visidia, Amora Montara has spent her entire life training to be High Animancer - the master of souls. The rest of the realm can choose their magic, but for Amora, it’s never been a choice. To secure her place as heir to the throne, she must prove her mastery of the monarchy’s dangerous soul magic.

When her demonstration goes awry, Amora is forced to flee. She strikes a deal with Bastian, a mysterious pirate: he’ll help her prove she’s fit to rule, if she’ll help him reclaim his stolen magic.

But sailing the kingdom holds more wonder - and more peril - than Amora anticipated. A destructive new magic is on the rise, and if Amora is to conquer it, she’ll need to face legendary monsters, cross paths with vengeful mermaids, and deal with a stow-away she never expected...or risk the fate of Visidia and lose the crown forever.

I am the right choice. The only choice. And I will protect my kingdom.

“Vicious and alluring, All the Stars and Teeth is a force to be reckoned with." (Hafsah Faizal, author of We Hunt the Flame)

I'd like to start by saying, no disrespect. I am writing this review to warn future readers/listeners/potential publishers. The book was great. It took some time to get started, but all of the elements were there for a fantastic story, and I cannot wait for book 2.
The narrator is absolute rubbish. Imagine if the cast of Rugrats narrated a book. Never mind, no need to imagine, because this is it. Ferrick is aged 18/19 in the book and the narrator's "voice" is Tommy Pickles. NO EXAGGERATION. A whiny, prepubescent boy, a child. Not a potential love interest, or hero.
Bastian, who I fell in love with based on his name alone, sounds like if Bart Simpson lived in CA as a surfer dude, with a smoker's lung. Then there's Vatea, whose voice cheaply mimics Calypso from Pirates of the Caribbean and an Irish barmaid. CHOOSE ONE.
Is she a horrible narrator? Yes. Should she never work again ? No. This was not the book for her, at all. She would be much better suited for a children's cartoon, or book, maybe.

Ok, so overall I liked the storyline, I give it a solid 3.5 stars. What I really didn’t like about this audiobook was the performance. I felt like the voices made by the narrator to represent the boys/men in this book sounded completely childish although they’re supposed to be 18 years and up. It really grated my ears every time I herd them.

What if you had been raised to believe a bunch of half-truths or outright lies? - A rather universal question asked by young adults who come to question everything their parents told them.

Following in the classic form of a bildungsroman, Adalyn Grace's All the Stars and Teeth is a polished debut novel telling the story of Amora Montara, heir to the throne of Arida. Like many a young person, Amora finds that her father hasn't been upfront with her about a few things, and those things, well, they aren't pretty. And Amora's magic, for this is a magical world, has great power and with that power the ability to do grievous harm. The novel opens with Amora reaching the age of majority and already realizing that there are just too many things she hasn't been informed about. Her father wants her to marry Ferrick and make shiny new heirs. There's plenty of time to learn about her future kingdom... later. Only after a public display of her powers that goes gruesomely wrong, Amora flees her kingdom of Arida and finds herself on the Keel Haul with a dashing young pirate named Bastian along with her bethrothed, Ferrick. Together they must solve the mystery of Bastian's loss of power, battle Kaven, and restore Amora to her rightful place.

All the Teeth and Stars is well-written and manages to use its tropes in a constructive fashion. Chief among its assets is the lesson that sometimes, it's good to question what you've been told by your parents, and to try to find truth and justice yourself. While not breaking immense new ground, I did enjoy this world and the potential darkness of Amora's magic. I also loved Vataea and the mermaid rights issues in this novel. A clever way to present civil rights and the effects of chosen or involuntary displacement.

The novel is well narrated on audiobook by Shayna Small.

I received a Digital Review Copy and paper review copy in exchange for an honest review.

I have been following Adalyn Grace for about the last seven months on Instagram and have been anxiously waiting for this to be released! Let me just say, that it was well worth the wait! The enchanting world Adalyn created is so mesmerizing, that you will feel like you are right there along side Amora and her crew the entire time. I can’t wait for the sequel and for all of the future works of Adalyn!!

I LOVED this story. I got the audiobook because I hated putting the book down while driving. The narrator almost ruined it for me. She was very breathy and sexual for no reason. Definitely not my favorite narrator.

So I've been wanting to read this book for so long now. Mainly because of the hype, but also because of the fantasy aspects. I chose to listen to the book instead of reading it because fantasy books usually seem better when listened to. Well I regret that decision. The narrator wasn't good at all for this book. Her male voices honestly sucked. They sounded like twelve year old kids! It was BAD! I really expected so much more from this story. It was pretty boring and then when you think it's going to start getting better, it doesn't. Don't get me wrong, there are some good and interesting parts, but overall it was such a blah book. The story finally started getting better towards the very end. I'm not even sure this book should've been as long as it was. I'm telling you.. waste if time. Hopefully book two will be better. Maybe this one would be better if I decide to read it, but I wouldn't waste a credit on listening to it. 3ish/5 stars.

It’s kind of a fun listen, but it’s predictable. And I don’t think the voices matched the characters.

The plot starts out great and then fizzles out. I felt like it should have been drawn out more. Instead it comes to an abrupt resolution and then ends. Also, the narrator was not the best choice for this book. She has a good voice, but she is not very good and creating a male voice. Some of her male characters sound like children when they are supposed to be teens or young adults.

I waited and waited for this to take off. It finally did about 85% along.

⚖️ Plot: The shake were just not engaging enough for me. If I were a DNFer, I would have given up. The ending did salvage my interest though. For this alone, I’ll be reading the sequel and praying that it will sort itself out.

🗺 World: Whilst I understood the world, I couldn’t picture much of it. If the book were longer but the plot more complex, it would have been perfect. Alas, we don’t get enough description nor enough perspectives to truly connect.

💑 Characters: I think the main issue was not enough deep POVs. I’ve found that when this is done well, the author is forced to create the backstories, motivations and characterization that immerses is into the book. Here’s to more than Amora in the sequel!

If these characters are supposed to be people of color I certainly can’t tell from the narration. I was unimpressed with the storyline and the performance.