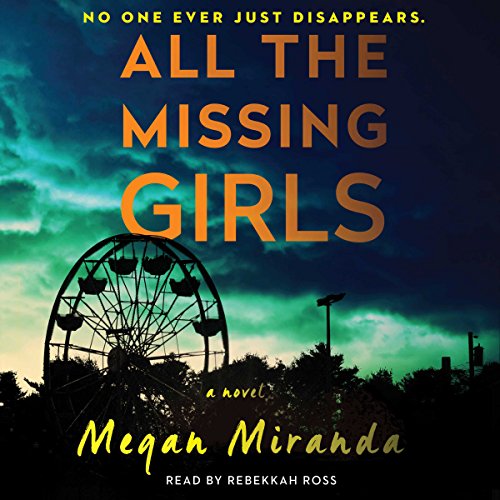 All the Missing Girls

All the Missing Girls

Like the spellbinding psychological suspense in The Girl on the Train and Luckiest Girl Alive, Megan Miranda's novel is a nail-biting, breathtaking story about the disappearances of two young women - a decade apart - told in reverse.

It's been 10 years since Nicolette Farrell left her rural hometown after her best friend, Corinne, disappeared from Cooley Ridge without a trace. Back again to tie up loose ends and care for her ailing father, Nic is soon plunged into a shocking drama that reawakens Corinne's case and breaks open old wounds long since stitched.

The decade-old investigation focused on Nic; her brother, Daniel; her boyfriend, Tyler; and Corinne's boyfriend, Jackson. Since then only Nic has left Cooley Ridge. Daniel and his wife, Laura, are expecting a baby; Jackson works at the town bar; and Tyler is dating Annaleise Carter, Nic's younger neighbor and the group's alibi the night Corinne disappeared. Then, within days of Nic's return, Annaleise goes missing.

Told backward - day 15 to day 1 - from the time Annaleise goes missing, Nic works to unravel the truth about her younger neighbor's disappearance, revealing shocking truths about her friends, her family, and what really happened to Corinne that night 10 years ago.

Like nothing you've ever heard before, All the Missing Girls delivers in all the right ways. With twists and turns that lead down dark alleys and dead ends, you may think you're walking a familiar path, but then Megan Miranda turns it all upside down and inside out and leaves us wondering just how far we would be willing to go to protect those we love.

"Rebekkah Ross uses a coolly detached voice to narrate this spellbinding mystery.... Ross rhythmically builds and dissipates the story's tension and excels with descriptive details and subtle character differentiation. Her pace is unrelentingly steady yet captures the many changes in the various flawed characters. As the layers of this atmospheric mystery are peeled back, Ross subsumes herself into the story and engages listeners in discovering the truth of what happened." ( AudioFile)

This wasn't for me, I struggled to finish it. I did not like the order the story was told in. Odd style of story telling and bland. Way to much unnecessary rambling about nothing interesting. Over use of the words "he said" "she said "I said" makes it sound like ametur writing. Not enough information to get into the characters, no character development. Just plain boring.

This was the first time I’ve seriously considered deleting an audiobook because of the narrator. Through the entire book I️ could not get over it. The tone felt so wrong for this character & every man in the book sounded exactly the same. Now, besides that, the plot for this book is just stupidly far fetched. You find the body of your best friend in your garage floor, and find out your sister in law or brother (who cares, right?) murdered the girl next door in cold blood, so what do you do? Cover it all up of course! The neighbor was a mean girl anyway, and Corrine hated you a little and made rash decisions so she wouldn’t mind. Never mind the families of the dead girls, and never mind the fact that you’re supposed to be a counselor?? Oh, and the relationship with Everette that was painfully dragged on through the book just to end in .5 seconds at the end? No regrets there! Never mentioned again. Lastly, the book is called ALL the missing girls....... ok there are 2 missing girls... TWO. 2 missing humans is quite enough for any town but the word All is a little misleading. Anyway. There were many other parts that left me unimpressed including the lame cover-up story they gave & got away with telling the police, but I️ think I️ made it clear enough that I️ didn’t enjoy this book. :)

I felt like this book was the most confusing story line. It doesn't get interesting whatsoever until the last couple of hours. It was written backwards which I hated. Don't recommend.

After the fifth time I heard the day before I almost quit. The flow of the book is not "typical" which did not allow me to think it through. I kept going and I am glad I did. Since I did not have all of the info I could not get a stable grasp on who did what. Ended up surprised at the end.

This book had so much potential and let me down. I kept waiting and waiting for something to happen. Too much thinking, talking, remembering. It took until the last 2 hours for it to pick up speed. Disappointed.

I did not enjoy the presenter, she tended to use the same tone of voice throughout the story that did not seem to show much emotion. It was also a cliche storyline, where the main missing girl is beautiful, mean, and yet everyone wants her affection.

I didn't expect the ending, and that's why it gets 3 stars.

Someone recommended this book to me. I'm glad I can't remember who, because I would have to remove them from my list of friends. This is a story about bad and stupid people making bad and stupid decisions. It asks the reader to excuse foolish and ultimate immoral behavior. It is told using a literary device (telling part of the story sort of in reverse) that doesn't work and performed in a way that all the voices are female despite an effort to have the male characters sound different. I listened to the whole performance because I wanted to give the author a chance to redeem this work, but it didn't happen. In the end, I'm sorry I spent the time.

This murder mystery felt a bit cliche. Very formulaic in it's format. The timeline jumping around was a bit frustrating but not impossible to follow. While the story arc, characters and general themes were sort of predictable and played out, I was pleasantly surprised with the ending.

i wouldn't recommend this

i dont know if it was the narrator, but i struggled with this book. it wasnt very intriguing. while the end was a surprise, im just overall dissapointed

good but a bit repetitive

I don't know why other reviews state it was confussing. It is actually really well dine for a story told in reverse order. I found Nicolette's narrative quite repetitive at times without providing any new information. And I found the he said she said annoying because the narrator is changing voices so it is not needed. I enjoyed it. Huge page turner.