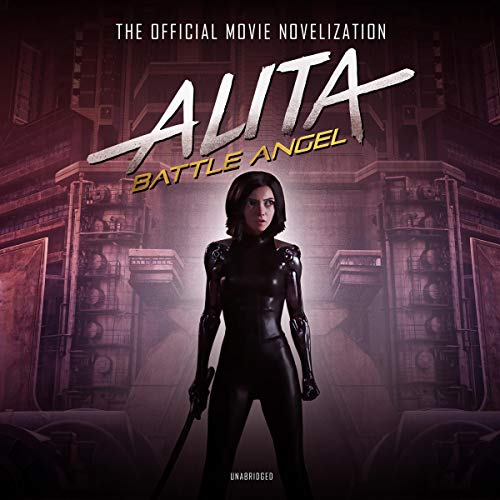 In the 26th century, a female cyborg is rescued from the scrap heap by a scientist....

This is the official audio novelization to the 2018 science-fiction film, Alita: Battle Angel, based on manga by Yukito Kishiro. The film is directed by Robert Rodriguez, written and produced by James Cameron of Titanic and Avatar fame, and stars Rosa Salazar, Christoph Waltz, Jennifer Connelly, Ed Skrein, Jackie Earle Haley, and Mahershala Ali.

This book is certainly enjoyable, as long as a person understands that it is not a typical novel. It follows more of a movie format than it does a novel format. One concern, is that this book is full of long tired cliches - Were a person interested in actually counting, they would have a rather long list by the end. It is forgivable overall - There are things that are worth going along for the ride. There is some wonderful character development that happens while the adventure unfolds - It is rather refreshing to be honest. It is certainly sci-fi and rather well done for the most part. The writing is even - a consistent balance between description, action - the dialogue.has too many cliches, but overall... not bad.

Feels like the author did her best to squeeze what she could out of limited notes provided to her by the movie studio, but wasn't provided enough to adequately work with, and also, as a big fan of the Battle Angel (Gunnm) manga, I get the impression the novelization's author either didn't bother to read the manga for research, or was told not to use it for reference. This leads to some contradictions between the movie and the novelization and almost everywhere where the novelization goes off on its own to try to flesh out something in this world or about these characters that were not explained in the movie, the original manga actually already had a much richer more interesting explanation that sadly wasn't tapped into here. I don't exactly know the process of how these movie adaptions work, but that's how I imagine it. For an instance of a contradiction probably caused by the author not being provided enough information, the character Nova, as seen in the movie and the manga, wears funny-looking goggles, but when he takes off his goggles, he clearly has eyes. But in this novelization, he's described as having had his eyes replaced by the cybernetic goggles. It's like the author was given a picture of Nova with the goggles on and wasn't told much more about him, so she decided to make up a backstory where his eyes got replaced by a cybernetic enhancement, without realizing that in the movie we see him take off his goggles and see that he clearly has regular eyes. I have other nitpicks, like this book making a backstory for the world saying that there used to be numerous sky cities, but they eventually all fell, leaving only one. What's wrong with that, you ask? Well this feels like it carelessly ignores the science behind the idea of suspended cities, because as explained in the manga, there's the suspended city we know, Zalem, on one side of the planet and it's counterbalanced on the opposite side of the planet by another city, a marine city actually, not a sky city. Both are suspended from orbiting satellites, connected by an orbital ring. Anyway, the point is, you need two of them to balance each other from opposite sides of the planet, so it doesn't make scientific sense to have a ton of sky cities all over the place. But that said, this book is not all bad. For example, we get a fleshed out backstory of Ido's nurse assistant, who was merely a minor background character in the movie. If you wonder why she has a cybernetic arm, you can learn about it in this novelization. Anyway, the book does what it could, delving into character's heads, so we hear what they're thinking that we don't get to hear in the movie and that's interesting, in a way, but it's mostly just a retelling of what you saw on screen. And it could have been a lot more interesting, especially if the author was allowed to tap into the rich source material of the manga.

so much more could have been done with this story. 90% of the book is just what was in the movie. not many thoughts or feelings besides what was needed to have the movie story make more sense. missed opportunity.

The narrator does an “OK” job, but action scenes lack luster. Utterly unsatisfying ending. The last two chapters were like the author just got tired of writing.

I listened to the first hour and a half, but absolutely nothing happens. The characters have no personality. There's no problem in the book either. No stakes. Nothing happens. It has no plot.

Love...Love...LOVED this book...!! I thought the story, the characters, the action sequences, and the narrator's performance were all top notch. For a Sci-Fi book, I thought the author did a great job of creating an amazing world full of strife, conflict, action, and the human element. The narrator's performance breathed life into each character and made you "feel" the journey they were on. I'm definitely planning on seeing the movie. If it is half as good as the book, it will be one hell of a ride...!! FIngers crossed for a second book and the creation of an Alita series.

I thought this was very nicely done. The story itself has a bit of trouble, a few leaps of logic and parts where the character's decisions don't make much sense. But I love the environment and atmosphere - science fiction with some steam punk for flavor. The story moves at a breakneck pace with plenty of action and excitement. I'm not sure why, perhaps because the main character, Alita starts as the most opposite thing possible to a hero with super powers, but I was really swept up by this story and could hardly put it down. I also saw the movie yesterday and loved it. It was really interesting comparing the two. In many parts, the movie was exactly like the book, word for word. But the movie also has some small changes, I think that were done mostly to keep it PG-13. Not a lot of real gore and almost no sex in either, but the audio book certainly had some of both that they must have cut from the movie as opposed to adding it to the book. Adding content to the book just does't make much sense. I really hope they come out with both a 2nd movie and book, but this time are a bit more careful with the story line.

I struggle to like it... way to immature and fake... not believable - unless you are twelve and mildly sub parr

meh.. not really for me.. couldn't finish it. I plan to return the book for a refund.

Unfortunately I think that for once, this is a story that’s not really good as an audiobook. The story was rather plodding and predictable, which would probably not be as big an issue in either a movie, where the descriptions would be visual rather than verbal, or even read visually, as those parts could be skimmed. The narration wasn’t bad, but it seemed Mr. Nishii was under the impression that the average listener would be about 5 years old. Yes, I now realize this would be a YA-targeted audience, but then again, I’ve listened to and read quite a few YA sci-fi books and never equated the tone as similar to how I might read to my grandchildren before. The inflections were just a bit overdone and emotive, and I believe even the average 13-year-old would find the narration a bit immature. Overall, not a bad listen, but I wish I’d just seen the movie.