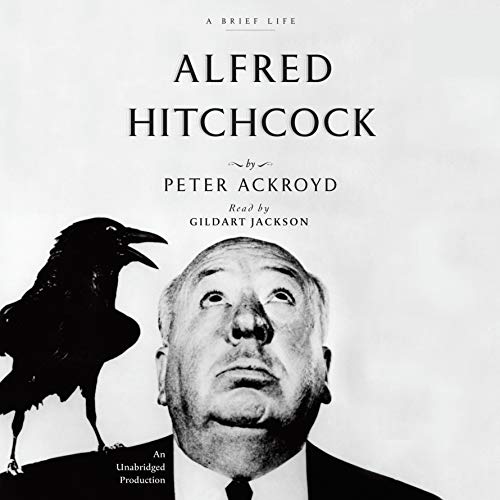 A gripping short biography of the extraordinary Alfred Hitchock, the master of suspense.

Alfred Hitchcock was a strange child. Fat, lonely, burning with fear and ambition, his childhood was an isolated one, scented with fish from his father's shop. Afraid to leave his bedroom, he would plan great voyages, using railway timetables to plot an exact imaginary route across Europe. So how did this fearful figure become one of the most respected film directors of the 20th century?

As an adult Hitch rigorously controlled the press' portrait of him, drawing certain carefully selected childhood anecdotes into full focus and blurring all others out. In this quick-witted portrait, Ackroyd reveals something more: a lugubriously jolly man fond of practical jokes, who smashes a once-used teacup every morning to remind himself of the frailty of life. Iconic film stars make cameo appearances, just as Hitch did in his own films: Grace Kelly, Cary Grant, and James Stewart despair of his detached directing style, and, perhaps most famously of all, Tippi Hedren endures cuts and bruises from a real-life fearsome flock of birds.

Alfred Hitchcock wrests the director's chair back from the master of control and discovers what lurks just out of sight, in the corner of the shot.

"[A] superb, insightful short life...Ackroyd's deft and moving biography proves that there is a fresh story to be told, and that he is the person to do it. " (Bee Wilson, The Guardian)
"If there is any writer capable of imaginative sympathy with Hitchcock, it is Ackroyd." (Duncan White, The Telegraph)
"An elegant and hugely enjoyable read" (Alexander Larman, Sunday Express)

From 1954 through 1960, Alfred Hitchcock directed and helped write and produce one of the most astonishing strings of great movies in the history of cinema: "Rear Window", "To Catch a Thief", "The Trouble with Harry", "Vertigo", "North by Northwest", and "Psycho" among others. I don't mean to suggest this was the only phase of his career when he made great movies. "Notorious" (1946) and "Strangers on a Train" (1951), among other movies, were also terrific.

If you're curious about the life of the man responsible for this impressive and varied body of work, Peter Ackroyd's "Brief Life" offers a succinct, lively, and very informative introduction. Much of the text is taken up by brief descriptions of the genesis of the stories leading up to the films (including the less interesting ones), Hitch's successes and failures in recruiting writers, actors, costume designers, and music directors for each project, critical and popular reaction to each film, and the director's peculiar and varied relationships with his writers and stars. Hitch famously likened his actors to "cattle," but despite this fact he seems to have had reasonably warm relationships with a few of them. Some of his great actors -- including James Stewart, Cary Grant, Grace Kelly, and Janet Leigh -- did not enjoy or had very mixed feelings about the process of making Hitchcock films, but nonetheless contributed immeasurably to the films' success and longevity.

Ackroyd touches lightly on a fact which must be evident to anyone who has seen a number of Hitch's films: The man could be a creep, and his creepiness probably worsened as he got older. The author mentions in passing, but does not emphasize or give too much credit to, rumors of the director's questionable propositions to some of his stars and company employees. He is more effusive about Hitchcock's dependence on his wife, Alma, for moral support and keen, insightful advice.

If you have wondered how this great English director managed to achieve such remarkable success, both in Britain and even more dazzlingly in Hollywood, this book offers a terrific brief, 10-1/2 hour, survey. After listening to it you might not end up liking the man, but you'll understand much better why he won the confidence of wealthy movie producers and some of his best peers in the film directing business ... as well the affection of cinema lovers worldwide and the broader public. The book is extremely well written, and the Audible version is wonderfully read by Gildart Jackson. Completely absorbing, at least to this long-time fan of the movies.

short and sweet. well spoken and a very entertaining listen. would highly recommend this book