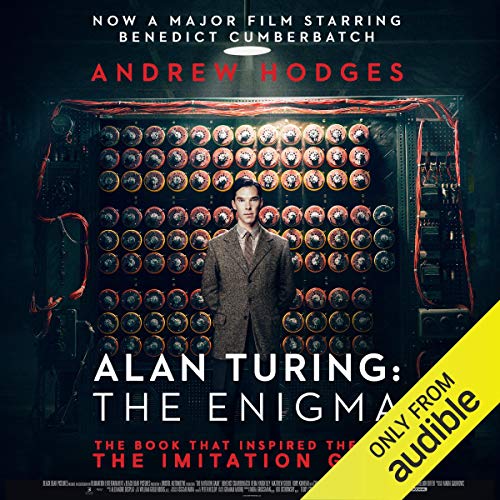 Alan Turing: The Enigma is written by Mathematician Andrew Hodges and is narrated in this biographical audiobook edition by Gordon Griffin. The book went on to be inspiration for the 2014 Academy Award-nominated film The Imitation Game. This is the tragic story of a genius whose profound contributions were doubted for decades and whose personal life was utterly persecuted. After an official public apology from the UK Prime Minister in 2009 and a posthumous pardon from the Queen in 2013, the life of Alan Turing has finally been honoured. This book provides the telling of Turing’s life story that he so rightly deserves history to remember. Available now from Audible.

It’s only a slight exaggeration to say that the British mathematician Alan Turing (1912-1954) saved the Allies from the Nazis, invented the computer and artificial intelligence, and anticipated gay liberation by decades--all before his suicide at age forty-one. This classic biography of the founder of computer science, reissued on the centenary of his birth with a substantial new preface by the author, is the definitive account of an extraordinary mind and life.

A gripping story of mathematics, computers, cryptography, and homosexual persecution, Andrew Hodges's acclaimed book captures both the inner and outer drama of Turing's life.Hodges tells how Turing's revolutionary idea of 1936--the concept of a universal machine--laid the foundation for the modern computer and how Turing brought the idea to practical realization in 1945 with his electronic design. The book also tells how this work was directly related to Turing's leading role in breaking the German Enigma ciphers during World War II, a scientific triumph that was critical to Allied victory in the Atlantic. At the same time, this is the tragic story of a man who, despite his wartime service, was eventually arrested, stripped of his security clearance, and forced to undergo a humiliating treatment program--all for trying to live honestly in a society that defined homosexuality as a crime.

"A first-rate presentation of the life of a first-rate scientific mind...it is hard to imagine a more thoughtful and warm biography than this one." ( NYT Book Review)
"A superb biography. . . . Written by a mathematician, it describes in plain language Turing's work on the foundations of computer science and how he broke the Germans' Enigma code in the Second World War. The subtle depiction of class rivalries, personal relationships, and Turing's tragic end are worthy of a novel. But this was a real person. Hodges describes the man, and the science that fascinated him--which once saved, and still influences, our lives." (Margaret Boden, New Scientist)
"One of the finest scientific biographies I've ever read: authoritative, superbly researched, deeply sympathetic and beautifully told." (Sylvia Nasar, author of A Beautiful Mind.)
"One of the finest scientific biographies ever written." ( Jim Holt, New Yorker)
"A first-class contribution to history and an exemplary work of biography." (I. J. Good, Nature)
"An almost perfect match of biographer and subject. . . . [A] great book." ( Ray Monk, Guardian)

In this book we meet a fellow human being that is gay. We learn to respect him for his intellectual abilities and see the pain a society inflicts when primitive beliefs supersede reason.

A Fantastic Biography For The Patient Listener

I really enjoyed this biography of Alan Turing. I agree with others that the book is very long with extremely complicated ideas and concepts presented. To me it could not have been made shorter without damaging the author's ability to really get the story across. We could not come to know the man, Turing, without going through all the detail of his childhood, education, books read that influenced his thinking and perceptions, and his general take on life. I agree that this occasionally felt a bit laborious at times in the reading, but it was necessary. Further, the author's insights offered great depth to the experience of life in Europe, India, Great Britain and America in the first fifty years of the 1900s. The culture, biases, prejudices and scandals of the time are brought into high relief through Turing's life and experiences.

I usually hate epistolary novels but in this case I loved hearing the letters exchanged between Turing and his family, friends and other scholars. It allowed us to hear Turing's own words and voice. This really brought the story to life for me.

I thought that the narration was gently done with great care. I did not find issue with mis-speaking or stumbles other reviewers have commented on here in reviews. Yes it was plodding and careful, but I thought it went well with the subject matter.

Recommended if you love a really good biography and want to know more about the origins of the computer and the experience of code breaking in WWII. Patience is required to let the story unfold, but I just loved it.

An insight into the birth of the modern age

While Mr. Turing's personal life became an issue in the early 1950s, the impact of his contribution to modern technology and the advent of computers cannot be underestimated.

This book takes us from the very beginning where mathematics and computation led to the development of computers.

Alan Turing was one of the great intellects of his day.

As a non-scientific person, this book had too much for me to understand and absorb. BUT I enjoyed the book. I listened and learned how difficult it was for individuals who differed from what was accepted as the 'norm' decades ago. Made me more appreciative that we have changed many biases. Was unhappy thinking that Alan Turing, a genius, was put through such horrible personal choices --in spite of his scientific and intellectual contributions. I can't repeat any of the scientific 'stuff'--but I listened and learned.

Would you recommend Alan Turing: The Enigma to your friends? Why or why not?

I would recommend the book to anyone patient enough to go through all the technical and scientific details....and bravo for the scientific mind...just perfect for these folks.

The narrator was easy to listen to...which was good as it was a long book, of which 40% I couldn't understand.

Do you think Alan Turing: The Enigma needs a follow-up book? Why or why not?

I am not a mathematician and was not familiar with the mathematical language. BUT this was so well written, explanation and description so perfectly executed, I felt confident with my ability to understand.
I saw the movie, Imitation Game first. Not only does this book illicit a greater appreciation for the writing of the screenplay it also encompasses a great deal more philosophy, history and emotion than I expected.
It took me longer to get through this than similar lengthy reads. This is only because of the amount of information to digest. It did not take away from the enjoyment.
This book was completely self contained and perfect for audio. There are no references to charts, illustration, diagrams or such.

This seems to me to be two stories, one technical, the other human. The human story makes my guts hurt. The technical story is in my opinion quite flawed. Perhaps the author tries to overwhelm with words what is not quite understood. The book is very long. There are endless technical discussions that more often than not poorly tied to any underlying thread or understanding of Alan Turing.

I am technical and I long suspected that subjects described in length and with which I was not so familiar were gummed up, not quite on the mark and poorly related to telling us of the genius of A. Turing. When the topic turned to one with which I am quite familiar, this indeed proved to be the case.

There are endless passages where there is no "thread". Topics are jumped back and forth through time with little coherency.

The confusion of the story is increased by the faltering delivery of the reader. The reading is quite bad in the first 1/3 or so. The reader often hesitates where he should continue and continues which he should pause. You can try this yourself by reading a few sentences with the wrong inflections, pauses, etc and simple english will be rendered into nonsense. I found myself often jolted as sentence delivery was just "off".

I think what I learned in this book will help me to quickly go to other sources and get a better understanding of Turing's technical contributions.

However, it seems to me that the author misses almost completely the incredibly important point that Turing cut his way through previously unknown jungles of ideas. Many of the ideas discussed, at length, are long now, a daily reality of people's lives, so much so, that the ideas no longer seem remarkable. The book needed not just a discussion but a creative device to not just explain this but to make the innovative thought and problem solving significant to the twenty-firth century reader.

Perhaps that's the most damning thing to say about this book, with its endless pages about the work of a truly creative man, is that the book showed no creativity in it's delivery of a very very long story.

This book, with all its words, is not all bad. It just doesn't inspire - at least it did not inspire me.

Objective and comprehensive of turing's life special attention paid to turing's sexuality especially in the context of its time. Less dramatic but more realistic than the movie

So much more than "The Imitation Game"

I had heard of Alan Turing and his involvement with the Enigma, and I saw the film, The Imitation Game -- I did not expect such a compelling story of a man's life and work. This is a wonderful book , and the performance is pitch perfect. I highly recommend it!

This book is especially interesting after having listened to George Dyson's Turing Cathedral, which paints the picture of what happened on the US side of the Atlantic during that time period and the very different but equally brilliant John Von Neumann.

Alan Turing The Enigma is long, very detailed and is some places drags. But it IS meant to be a "definitive biography" so such is to be expected.

The technical material presented was not too deep nor too shallow for me - an electrical engineer and programmer.

In my opinion, you can not know Alan Turing without knowing his homosexuality and what he endured because of his independent nature. If such matters turn you off, then that's an intellectual loss for you.

I can only say that I am delighted I chose to spend the hours listening to this book, especially given that I will soon be seeing the movie based on it.

I watched the film a couple of times before, and loved it, but the story from this book is extremely good and absorbent, so much that I fell in love with Alan Turing straight away!! The narrator has a great tone in his voice, I love his British accent, he tells the amazing and inspiring story of this genius with so much passion and with a great performance that I want to hear it all over again! A must!!!