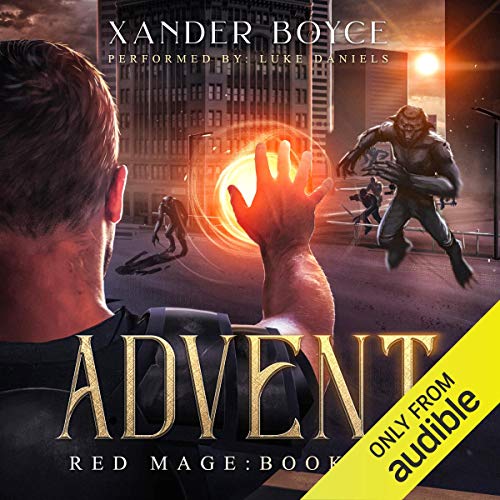 Drew Michalik was working in a top-secret facility in Washington, DC, when the Advent began. As all electronics in the world simply ceased to work, blue screens filled with information appeared before him.

Drew was given access to a mana interface and a limited number of reality-altering crystals called Xatherite. Following the instructions on his vision-impairing screens, he "slotted" his Xatherite and changed his fate: He gained the ability to cast spells. Now alone in the dark, he must battle through the government bunker turned dungeon in a desperate bid for survival.

Escape is only the beginning, the first of his many problems in the changed world. Drew will be tasked to not only survive...but to guide the rest of humanity safely through the anarchy.

Like a marvelous blend of Kona coffee, Zander has blended SciFi with Litrpg. Drew is an excellent hero and unlike many Litrpg protagonists, he is intellegent and learns quickly and responds to situations. Drew also avoids most of the disbelief and denial throes most heros seem to go through. Zander has created a believable post apocolypse world. He skillfully intertwines the Greek Pantheon into the story, but does not let them overwhelm the tale. A must read for the LitRPG genre.

Also, Luke Daniels as always delivers an excellent narrative. He is one of if not my favoritive story teller. He brings the characters to life and makes the scenes believable, interesting and makes me want to keep listening. I hope Zander and Luke Daniels continue collaborating together.

All I can say is wow!

I don’t think I’ve loved a story so much right out of the gate as much as I did Advent since Dante’s Immortality. This book was incredibly fun, well thought out, had a nice MC, and fleshed out characters. I have to admit though that there were some things that kind of scared me right off the back.
The cons. There are very few of these, but I have to say that right at the beginning of the book we get hit with this huge info dump on how the magic system works, and it came off as being so complicated that I got out my slide rule, my abacus, and boned up on my physics before I continued. It was a lot to take in, and it was a very sticky wicket to get through. Admittedly, once the book started flowing and the magic was shown in action it all made since, and became infinitely more simplified. In fact, I believe this is one of the cooler systems of magic that I’ve ever read about. It made me think of a point back in the 90’s when fantasy was in full swing and publishers were looking for something new and fresh, they never cared about characters, setting, or conflict. The first thing they asked was what kind of magic system do you have? This book would have knocked their socks off back then and been snatched up in a bidding war. So the magic is really neat, and I like how it progresses.
Another con. This one I’m not going to let go of so easily. The MC is in the Coast Guard, and once things go crazy the people he meets kind of agree that with the situation the way it is, and everyone having been drafted into an intergalactic navy that they might as well forgo all the rank issues, but the minute they come across a real officer they all defer to his command. My first instinct would have been to tell him to bite my bottom and get out of my way. That doesn’t happen. They sort of circumvent his orders, but still back down when he finds out. That was a real weak point in the story, and it still bugs the hell out of me, days after I read it, that Drew Michalik would kowtow so easily still bothers me. It was out of character.
Last con; Zoe. I need resolution. That is all.
The Pros, The rest of the book. Seriously. This is one smooth spread of peanut butter over a chocolate bar. I had a ton of fun seeing new monsters in addition to new takes on the old ones. I loved how the spells were able to be combined and connected and used in new and creative ways.
Drew is a slick and smart cookie who is tough and intelligent and a blast to watch get put through his paces. In spite of the OP nature of his abilities he is fascinating to watch grow. He plays out to be exactly like what he is, a normal guy thrust into extraordinary circumstances struggling to keep himself and his people alive. Oh, and that’s another thing that I liked about this book. People die. For real, in tragic and terrible ways and I mean from the core group of individuals. There is no rescinding or voided the losses. When they are gone that’s it, death aint the beginning, it’s the end. That is good writing, and it lets you know that just about anyone can buy it at any given moment.
Dakota Krout ought to be really happy with the way this book turned out, because it is bloody fantastic and smart. This is the way to break in his new publishing house.

Final score 8.4 stars. Xander Boyce looks to be at the level of Corvin, Willmarth, Krout, and Dean just to name a few. He knows how to craft and tell an amazing story.

As seen on the Litrpg Audiobook Podcast.

One never knows what to expect from the first book of a series, particularly when it's the author's first release. And fortunately, Xander nailed it—a pleasant surprise indeed. Great world building. Interesting (and new) magic system. Excellent plot. Look forward to listening to book deuce of the series.
Fabulous narration by Luke Daniels, as usual.
Highly recommended!

Advent starts abruptly for the main character, Drew Michalik, as he awakens after a reality-altering event. The human populations seems largely reduced and the power grid is dead. Thankfully, the vending machine contents are still edible! Drew takes it upon himself to find and save other survivors from giant spiders, trolls, and other dangerous monsters.

Characters gain access to magical powers using crystalline objects, xatherite, which can be absorbed into their own personal skill tree. This gaming mechanic reminded me of Final Fantasy games where characters equipped materia to gain new spells and abilities. We find out early in the story that everyone has different types of xatherite they can use and in various quantities. Other characters seem to have mostly utilitarian spells, to begin with, while Drew has access to powerful offensive magic. This difference is part of an important plotline which develops as Drew learns more about his reality. A character's physical capabilities, however, seem to still be rooted in reality. Unless they have a spell to alter them.

The time spent on character stats seems shorter than other titles I have listened to. Some other series have exceptionally verbose leveling descriptions. Xander does a great job showing us growth in the character and his spells while not becoming repetitive. I am eager to see where this story goes in future books and look forward to following it.

I was given a credit to purchase and review this title. Thank you Mountaindale Press!

Reminds me of Daniel Black series without the harem aspect, straight forward action and world building in this book hoping for more in the next book

A dungeon crawl and not much else

I'm a big LitRPG fan, so I'm always looking for a unique take on the genre. Advent has one: the real world becomes an RPG, as the apocalypse happens, electronics stop working, magic comes into existence, and monsters decimate the human population in days. When Advent happens, the main character is alone in the basement of a government building that has become a monster-filled dungeon, and has to fight his way out.

The first third of the book is one giant dungeon crawl. There are monsters and spells, and more monsters and spells, and occasionally other people. We do meet other survivors - this is a dark book, where a lot of good people die, and where nearly all children are lost in the first days. But although the number of characters grows over the book to include hundreds by the end, it's clear that the main character is in the spotlight. We spend nearly all of our time with him alone - him and his spells, anyway. There's not a lot of relationship building, and nearly all the plot centers around Drew himself. He's made to be Special, something shocking to an aeons-old, quadrillions-of-people civilization with its dozens of god-like rulers. I found it more than a little off-putting how everything was lining up to make Drew seem unique and important. Don't get me wrong - I like the idea that the hero is special! But it seemed heavy handed.

The other thing that bugged me was the 'update' messages from the mysterious System. At times, the narrator spends several minutes listing off each and every spell that has been upgraded, attuned or levelled up, and it's easy to zone out of the book when that happens. It's not the narrator's fault; he does a good job of reading the book, but that kind of thing works better in a written format. The Narrator is pretty good and did accents fairly well; his female voices were a little rough, though. Otherwise no complaints about the speaker.

The book isn't my favourite - I wavered back and forth whether to stop reading, but eventually decided to just finish it - but it grows on you. The plot IS original - maybe too much so. The idea of magic-using spaceship-flying human gods using Earth as a way to grow magic across different dimensions seems pretty outlandish, especially when you add in the level systems they introduce to everybody when they split the dimensions. But as the book goes on, the main character begins to question the nature of the system and what it means, and the reader gets a glimpse at how the book could become something much better in the future. Right now, though, it's a slog of violence and level ups that takes me out of the book - the opposite of what I'm looking for.

a nice find, fun and well written. like dose a great job as always. well worth a credit

Great start to a new series

Great book and great performance. Seems to be setting up for a 3+ book series(hopefully!) Can't wait for the next one!

One of the best LITRPGs

One of the best of LITRPG! The main character, Drew, is our everyman thrust into unknown, but certain, danger. The general thread of the plot echoes back to old tropes, such as the Sword in the Stone, in which the hero suddenly finds him or herself thrust in a new and magical world. In this case, Drew, wakes to find himself in a world in which a highly technologically and magically superior people split Earth into a new dimension to use it as a combat training area. Though the plot trope might be familiar, the magic, the people, and world building are unique and well-developed. I mean who would have thought a Coastie would be a hero? (Sorry, ex-Army showing some love to my US Coast Guard family.) Also, keep an eye out for easter-eggs/references to contemporary sci-fi and fantasy shows and authors, such as Firefly, Stargate, Robert Jordan, Dakota Krout, Brandon Sanderson, and more!

The best part of this book is that there are zero herams. Excellent story and wellness rated as always. It has an unique and interesting magic system.