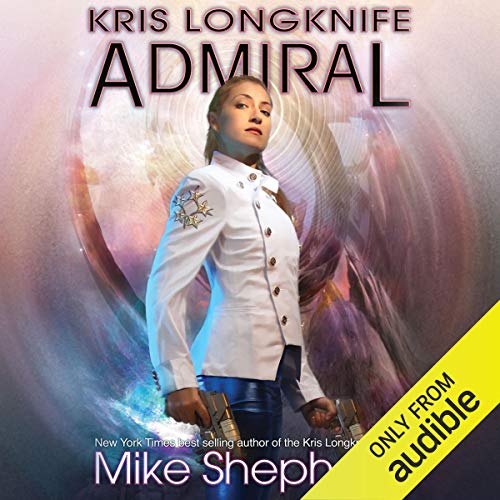 Admiral Kris Longknife should have known the job offer was too good. Really, she knew by now that what was too good to be true really, really isn't. Still, she jumped at the chance to be the first human emissary to the Iteeche Empire.

Only when she got there, and met the Emperor, a teenage kid swamped by his throne, did Kris find out that there was a little civil war going on in the Iteeche Empire. The loyal forces were losing, and they needed the best fighting admiral they could get. So they got Kris Longknife.

Now Kris is sweating out collecting a fighting force - that won't make her their first target. Now she's trying to figure out how to fight ships identical to hers, that outnumber her four to one or worse. Oh, and she's got to keep the merchant princes in her embassy from making a mess of everything. A whole lot of people are hoping this Longknife can pull a grizzly bear out of her hat. A whole lot of other Iteeche are hoping the bear takes off her arm.

This continuation of the Longknife Saga is 112,000 words of battle, intrigue, and assassinations including a few wrong turns on Kris's part. Enjoy!

In the last book of this series, Kris was appointed the Ambassador to the Iteeche Empire. In this book we find out there is a civil war going on and the Emperor is losing; so he asked Kris to help by taking command of his Navy.

The book is well written. It is great to be back with old friends again. Of course, my favorite is Nellie. The book has humor, suspense and lots of action. The book ends with a big space battle. I have enjoyed this series about Kris Longknife. It is a fun space opera. Shepherd has created some interesting characters and has built on them over the series. This makes a great get-away-from-it-all book. I noted the complaints about the lack of editing and proofreading of the book in various reviews. One of the great things about audiobooks is the listener does not have to deal with the lack of editing and proofreading.

The book is eleven and a half hours. Dina Pearlman does a great job narrating the series. She is an actress and audiobook narrator.

a wonderful addition to the series

I've listened to most of the other books in this series at least three times. In this episode Kris must face an enemy much different than the many others she has faced earlier. Yet the battles and resulting horrors of war are astonishingly similar. I am captivated by this story. I can hardly stand to wait for more episodes to see how Kris grows toward some resolution in understanding that is somehow worthy of the cost.

It was a good start, I enjoyed the start where Kris had to balance the Iteeche and Human interests and try and find some sort of common ground. However there were some things that were off putting, my biggest off put was the weird "hacking" and the outcomes of it. But I am biased to how Shadowrun normally portrays cyberspace. Also the ending of the book was a huge flop with me, it was a huge space battle but i had no idea what was going on, who was doing what, and what the objective was. I think the rebel fleet was trying to draw Kris off to attack the palace? It fell flat and confusing and could really use a tightening up job.

Not up to Longknife standards

Always good to see Kris again, but this book is flawed by spending so much time in a huge space battle that just goes on and on and on with nothing interesting happening, just fleets flying around and killing each other ad infinitum. It just got tedious and repetitive.

I've really enjoyed the Kris Longknife series and am sad to see it end, especially in such a disappointing way. This volume is really part two of Emissary, the previous book (I liked that one well enough, on its own). I know this series is military SF as well as space opera. When there is world building, characterization, SF and story, I enter into the military aspect for the most part. What prevented me from liking this one very much: It veers far too much into fantastical "magic" in its technology; and the space war is so protracted that I ended up skipping through most of the last half of the book, which makes me feel cheated and I might return it for that reason. Also, I was disappointed that there was nothing in the way of an epilogue. It was as if the author couldn't wait to finish it. I thought these fine characters deserved more.

Not his best effort

The final 2 hours of the book was the battle. Mostly flaling in the wind. Too much null writting. It was obviously to sell more words, not advance the narrative. T he battle could have been, and should have been, coveted in half the words. Hope the next book is better.

It is a family legend that I fell asleep during several of the tedious battle scenes in the Lordof the Rings movies. Ditto here.

the metaphorical hacking of computer systems was cringe induceing for lack of any better words.

good continuation of this fun character

the interaction of Kris and Nellie is always good. the fleshing out of the itichii culture is welcome and bodes some interesting storylines if the itichii females come into play because of kris' interaction. I really liked admiral Koth and his warrior, but understanding attitude. the battle was drawn out a bit, but the Revelations of the player involved made it worth it.

Warning about this book and following #17 and #18

This book #16 starts an story arc with the Itechee.

The Longknife series has always been "light, fun reading" - not focused much on the science part of SF.
However this book and much MUCH ore so #17 and #18 show an extreme lack of science, logic and common sense but instead a lot of lazy careless writing.
In these three books, about 70% of the entire content seem to consist of "magic smart metal" - no longer is Kris Longknife the main character - but its the smart metal, now. And not ion a good way, the various smart metal scenarios and applications are full of very obvious logic and science mistakes or outright contradiction compared to previously described situation.
If this were just a minor side fact and the rest of the book contents were fun reading - that would be fine.
But instead, this takes center stage, there is no other plot and the inconsistencies are thrown into your face one after another, constantly!
- smart metal ignoring inertia, gravity, wind/air streams and other basic science
- contradictions: ship lasers need several minutes to charge - but anti-air lasers can be formed completely out of smart metal AND fire within NANO seconds
- Itechee "simple people" use electronics based on vacuum tubes... really?
- Itechee society and technology described as very backwards... way TOO backwards to be realistic.
- Planets with 50 billion population and high-rises have no fire control sprinklers and no normal fire fighting service
- Kris first goes out of her way to avoid civilian casualties... and then blows up several high-rises and no mention at all about potential casualties
- Description how smart metal nanos are used to infiltrate blood stream and travel to the heart of some Itechee to kill them... and then later Itechee use simple water mist and showers to successfully fight off ALL nano listening devices

The list goes on forever... in this book, it is still somewhat acceptable... but in the following #17 and #18 such occurrences of lazy writing are happening constantly and all throughout the books.