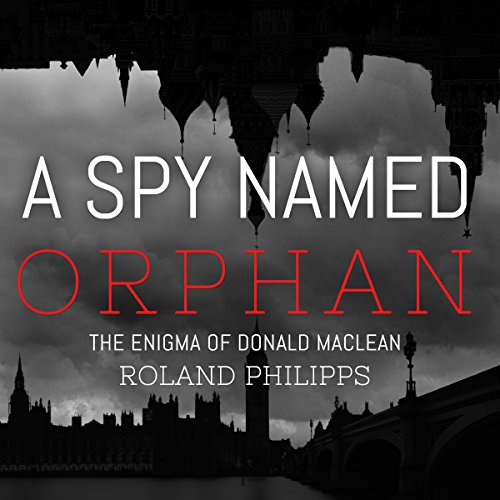 Donald Maclean was one of the most treacherous spies of the Cold War era, a member of the infamous "Cambridge Five" spy ring. Yet little is known of this shrewd, secretive man. The full extent of his betrayal has never been documented - until now. Drawing on the recent release of previously classified files, A Spy Named Orphan meticulously documents the extraordinary story of a man leading a chilling double life until his exposure and defection to the USSR.

Roland Philipps describes someone prone to alcoholic rages, who rose through the ranks of the British Foreign Office while secretly transmitting through his Soviet handlers reams of diplomatic and military secrets detailing intelligence on the making of the atom bomb and the division of power in postwar Europe. His story has inspired an entire genre of spy movies and novels, but no one so far has written the definitive story of the man code-named "Orphan."

This audiobook draws on recently declassified official sources to present an interesting, informative and very sympathetic account of the life of the famous British spy Donald Maclean. The British foreign and intelligence services come off extremely badly in the telling. Maclean spied for the Soviets for over fifteen years while rapidly rising through the ranks of the foreign service. At the same time, he compromised virtually every important secret that came his way in a career that took him to important postings in London, Paris, Washington, DC and Cairo in the period that lead up to and included: WWII, the Manhattan Project, and the early Cold War. Ultimately, he was outed through American intelligence code cracking efforts. This book puts a heavy focus on Maclean's motives, boozing and carousing, family life etc. I wish it had explored his personal career accomplishments in a bit more detail than just pointing out he ran a tight ship and did great staff work. I'm sure there was a bit more to it than that which would explain his rapid rise through the ranks. The narration is excellent. Highly recommended.

I am very interested in how people become spies and/or traitors, especially intelligent people. However, I am now in Chapter 3, almost two hours in, and I can't take it anymore. The narration style is repetitive and not good for a non-fiction book. All I can hear is someone who sounds like Neil Gaimen when narrating the Graveyard Book.

This is NOT how I want to listen to a non-fiction book about Brits who became agents for the Soviet Union.

I returned this audiobook after the first chapter or two. I couldn't warm to Jonathan Cowley's narration. Once upon a time there was a thing for 16-yr olds called GCE O-level 'English Language & Oral'. One was examined on reading prose aloud, and this narrator would have failed. Furthermore, in telling us the name of Kim Philby's father, he didn't seem aware that 'St John' is actually pronounced "Sinjen". Later he referenced an Aga cooker, but didn't seem familiar this type of stove is commonly found in the kitchens of upper middle class country houses. Enough already!
After returning this audiobook, I listened to "Stalin's Englishman" by Andrew Lownie, narrated by Steven Crossley. Any and everything about the 'Cambridge Five' is just too compelling. So, when I finished Stalin's Englishman, I went back and re-purchased "A Spy Named Orphan", narrated by Jonathan Cowley.
What does that say about this audiobook? Too compelling a story that takes you past the pain barrier.

A fascinating story about a fascinating man. Unfortunately the narration was poor and at times interfered with the tale trying to be told.