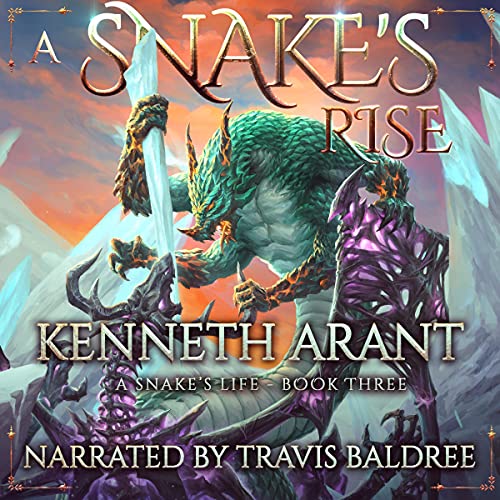 She promised him for better and for worse.

Torga’s been keeping a secret from his wife. While Reina, an accomplished monster hunter, was overjoyed to be reunited with the man she loves, what would happen if she found out that he was actually one of the largest monsters in history?

Torga’s plans to reveal himself are interrupted when a conspiracy of other gods sends him and his wife to Helheim, a frozen waste where their skills and magic are stripped away. He’ll have to recover his powers, and possibly make a deal with some of Helheim’s less savory residents to escape, but will Reina accept his help once she realizes who he really is? He’s going to have to convince her, because her mortal body is dying, and if it does, she’ll be trapped in Helheim forever.

Wow. What piece of garbage.

Just got to love taking your all powerful character you've spent 2 books making a badass, into a little b°tch that gets tossed around like a rag doll for most of the book. I didn't come here for it's compelling story. I came to watch a Garden Snake turned God kick @ss and dick his wife into a coma.

He doesn't even eat people anymore

Remember when this series was about a giant snake eating people?

Because at this point it's almost all divine politics and filler. At one point, our protagonist, THE WORLD DEVOURING SERPENT, has to put on a tuxedo and go to a fancy party where he proceeds to shuffle awkwardly in the corner like a nerd at prom, before quietly leaving.

I'm not saying the book has to be non-stop action, some of the best moments in the previous 2 books were in the downtime, but there's just nothing here.

Travis Baldree's narration is excellent as always, but can't do much for this slog of a story.

the first two were fantastic this one not so much

It felt like the author had a third of a book and simply sterched it out give us this boring mess and the ending kinda blew.

loved it. I do need more such a strong story and a romantic one at that

This book felt like it pulled the emergency break right when it was about to take off. the whole hellheim part caused physical pain to me for Torga. The gods seem to prove themselves self important ninny's with over inflated ego's so big if they exploded they would wipe out a whole galaxy. I get why they have to try to nerf Torga's power he's either able to flatten a mountain with a backhand or requires multiple punches to even inflict a scratch on someone only for it to be healed instantly. Can't wait for book 4 because I honestly can't predict what will happen because of what we got at the ending

Definitely worth the time but not as good.

Torga's story continues and it's definitely interesting but ultimately not as engaging as previous books in the series. Took me nearly 3 times as long to finish it....ultimately because I wasn't as invested. Torga's character has become so OP that there is no real tension. Most of the book he spends killing people and even fights with other gods to get to his wife with no real effort.

Torga the minor god of hunger and gravity is at it again. While I admit this one isn’t my favorite entry so far, it really did a good job of setting up the next arc. I love these books, good isekai from western authors is incredibly hard to come by. If you love things like slimes life, or so I’m a spider so what?, you’ll love the misadventures of my favorite snake deity.

Really enjoyed the continuation in the series. Full of adventure and excitement. Not much in the way of originality but nothing to complain about. Solid 4.5 stars.

only reason not 5 stars is I got tired of hearing the stat sheet. still a very good book and series

i can not wait for the fourth book. all I want is for torga to eat more things.